Decent service and – sadly, sometimes – decent workmanship can be tough to find in Cape Town. And there is nothing worse than having to guess at what service provider you should invite into your home to get a job done safely and properly.

Personal recommendations are the way to go, then. And I have got a couple of them for you if you’re in Cape Town (or if you want to get in touch and try to negotiate overseas rates, I guess).

And for your security needs: AZTech Security – 0618425276 or [email protected] – they’re basically the same as Skye, but for your alarm. And they work from Muizenberg.

Both these companies have done some great work for us and I would thoroughly recommend them. 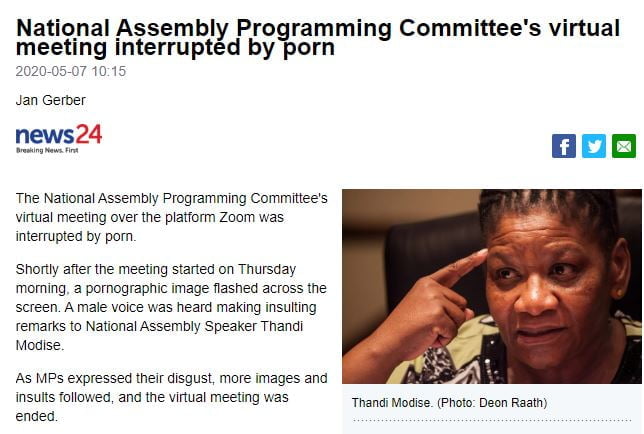 And I’m certainly not condoning anything here.

But the next line of that news24 piece gives us this quote:

I’ll share that again here because that screenshot isn’t great. :

At the committee’s meeting last week, there was concern about how secure the Zoom platform is.
House chairperson Cedric Frolick said at that meeting he was in discussions with them about how to get a more secure connection.

Now, I’m no expert, but I’d imagine that Zoom’s first suggestion in those discussions might be something along the lines of “don’t share the meeting details on your public twitter feed”.

Because, just 10 minutes before the meeting started this morning, there was this, shared with their 650,000 followers. 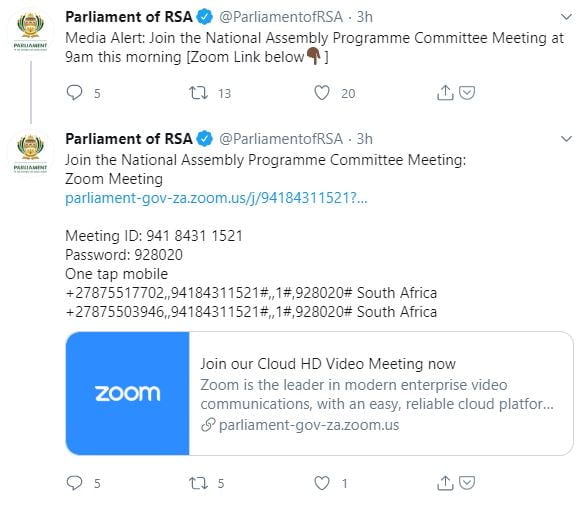 Honestly, who could have seen that coming? (no pun intended).

A reminder that these are the people in charge of the country.

Today, I learned that there is a security company in Gauteng called Beagle Watch. I have a number of issues with this.

To the uitlanders, allow me to explain. Here in SA, many people have their house alarms connected to an armed response security company. That means that when your alarm goes off – most likely because you forgot to switch it off before letting the dog out – a friendly man with a gun will show up at your door in case you’re in trouble. I’ve actually yet to hear a story of anyone actually being saved by the friendly man with a gun, but perception is everything and if it helps you sleep more soundly at night to pay a man with a gun to be on-call, then that’s great.

There are all the usual suspects (pun intended) on the scene: ADT, Princeton, Fidelity, Chubb. And then there are the regional services as well. They claim to understand the local crime problems better than the bigger, less personal entities. One of these local offerings is Beagle Watch in Randburg:

The best in class response times! No matter what the emergency, Beagle Watch will be there first!

Proactive security is our focus – we are the only company dedicated to the prevention of crime in your area through continuous, 24 hour, high visibility patrols.

Continuous and 24 hour. Colour me impressed.

But when you choose an animal to name your security company after, you want one that’s ever-vigilant, alert, attentive, powerful and quick to react.

I have a beagle. It’s really none of those things.

And so the name really doesn’t instill any sense of confidence in me. I’m only warning them about this after the well-documented collapse of Sloth Security in Constantia back in 2013.

The badge is also a problem: 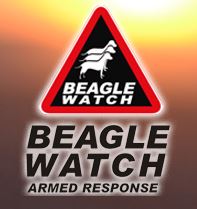 It’s like they got an 8-year-old to draw a beagle. Three beagles.

Beagles do have moments where their senses are piqued and they’re ready for action. These moments usually relate to seeing a squirrel in the park and generally only last for 3 or 4 seconds. But a key feature of a momentarily alert beagle is the elevated tail. This is an evolutionary hangover from when they used to be powered by electricity, much like dodgem cars. Also, they always face left when they are ready to go. See? 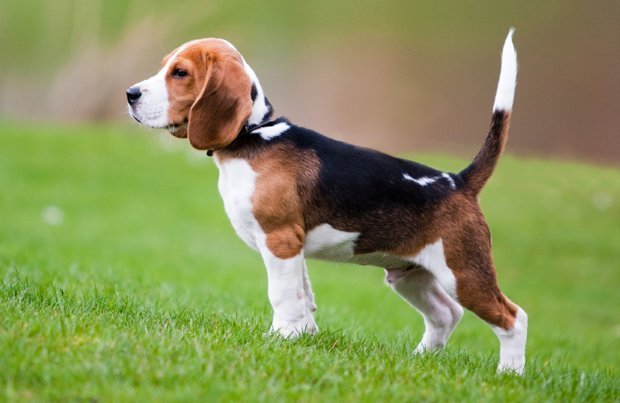 A beagle with a tail as depicted in the Beagle Watch logo is depressed, tired or depressed and tired and is certainly not going to offer any resistance to local criminals.

Also, you’d never get three to line up in such an orderly fashion. At least one would already be asleep or foraging for food.

My suggestion to Beagle Watch (and I will be forwarding them a link to this post so that they realise their error in nomenclature), is that they change the name of the business, soonest. And it doesn’t have to be a train smash of process. A simple, carefully applied daub of black paint on each of their vehicles turns Beagle Watch into Eagle Watch: the genus Aquila possessing all of the qualities one looks for in a neighbourhood security company. And they also have an aggressive beak and talons, filling the crims with a sense of fear and dread. Everything that a beagle doesn’t.

Mark my words: you can watch the crime rate in Randburg drop like the proverbial stone.

I’m frankly amazed that no-one has come up with this idea before.

Back to Cape Town and back home after a couple of days at the cottage and I have realised that I needed a break there to remind me that this is a good country to live in.

Don’t get me wrong. SA is my home. My house is here, my wife and kids were born here and I have settled in like a duck settling into water (big splash, few ruffled feathers, some soggy bread). And I love it here. But coming back from our recent visit to the UK, I was again reminded about the thing I don’t enjoy in SA: the lack of personal freedom. (and the fast internet – Ed.)

Even living (as we do) in a leafy, decent suburb, people are uneasy about going out at night. While we were in the UK, wandering up the road to the pub each evening was great. Here, the roads are poorly lit, the standard of driving is poor, especially in the evenings and the chances of being mugged are unnecessarily high. We all live and exist behind great big, high walls and I miss the freedom that living in the UK gives you.

But that’s in the city. Down in Agulhas, things are so much more open. No walls, no electric fences. (I hope I’m not giving the burglars helpful information here.) I needed to be reminded that this can happen here. And we made the most of it. Beach, braai, beer. Brilliant.

It reset my system and I am at peace again.

It seems that Sunday Mirror hack Simon Wright was behind the much-publicised “Fan in the Changing Room” incident after England’s pisspoor showing against Algeria in Cape Town.
This from local paper The Times (which is no paragon of virtue or accuracy either, I might add):

A British reporter from The Sunday Mirror has been arrested by the South African police for “orchestrating” the incident at Cape Town’s Greenpoint Stadium where UK citizen, Pavlos Joseph trespassed into the English team’s change room.

Simon Wright was arrested for “booking hotels for Mr Joseph under a false name and also harbouring and interviewing Mr Joseph for seven days after he made news,” National Police Commissioner General Bheki Cele told a press briefing in Pretoria this morning.
Cele told both local and international media that police had evidence that Wright had orchestrated the incident and ” involved the cooperation of a number of individuals”.

Cele said observation of CCTV footage from the English change rooms and investigations confirmed this.

“They just wanted to put the World Cup in a bad light and to profit from this act- we expect to arrest more people in this case.”

Wright wrote several articles in the run up to the World Cup, criticising South Africa security and dissuaded people from attending the tournament because of crime.

Furthermore, Cele said that since the start of the tournament, countrywide, there have been 29 cases of unauthorised ticket sales. 33 people were arrested for their involvement, of which 14 were South Africans and 19 from other countries. In total, Cele said police have arrested 316 people, of which 207 are South Africans and 109 foreign nationals, including people from Mozambique, Algeria, 8 from the UK, 5 Argentinians, Denmark, France and Australia. Cele joked it was a “United Nations in Crime”. Most of the arrests were related to theft charges.

Cele said that security had been successful and that both World Cup security and normal policing were as important as each other.

“The SAPS are good ambassadors. And I would like to encourage SAPS members to ensure the Fifa World Cup takes place in stable and safe environment.”

And here’s Wright’s article on that changing room incident, complete with (and there’s a clue here) a picture of Pavlos Joseph on the pitch at the Cape Town Stadium – which is obviously the place that most trespassing English fans are taken to directly from the changing room area. Right.

This is merely evidence of the campaign of negative and sensationalist reporting that has been waged on South Africa by the British tabloids. It’s nothing we haven’t seen or heard before, but it’s nice to see some action has been taken against one of the amoral and unprofessional “journalists” behind this repeated nonsense.

UK readers of 6000 miles… please share this with your friends via facebook, twitter or email. Or any other method, really.
I have this sneaking suspicion that you’re not going to be reading much about it in your papers. Especially the Sunday Mirror.

So I’ll keep you updated.

And here’s an update now:

“It was an absolutely legitimate story that he was involved in.” said Nick Fullagar, spokesman for the British newspaper group Trinity Mirror.
He believed that the journalist “conducted himself perfectly properly as he would have here in the UK. We have spoken to him and he’s got a lawyer,” he said, adding that he would appear in court on Wednesday morning.

And that’s their defence? That Wright conducted himself as he would have done in the UK?
That’s about as good an admission of guilt as you’ll ever see.