It’s been an interesting year, but it’s nearly done now.

There were plenty of highs, several (or more) lows, and quite a lot of average kinda stuff, as you might expect. But all being well (as this post was written over a week ago), we’ve made it this far – 364/365ths or 99.73% of the way through. And 2020 beckons. A fresh start, a new opportunity, but still with the same old arseholes who helped make the last few years so miserable. (You can choose your own arseholes here.) 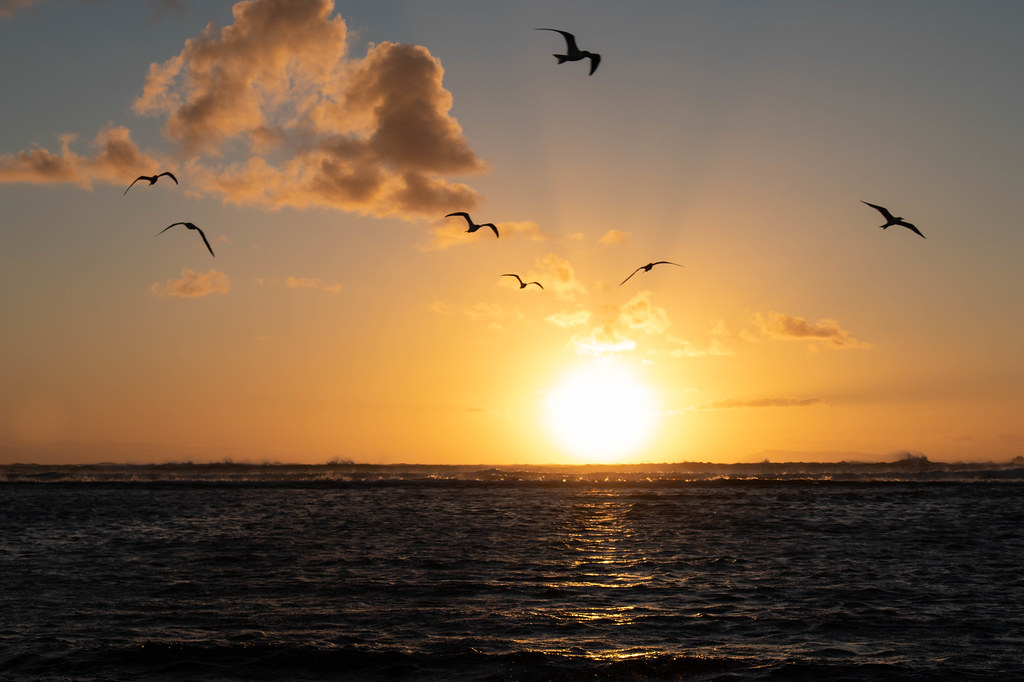 A watery autumnal sunset, punctuated by Swift Terns and anticrepuscular rays seems appropriate. Not one of my best 12, but it fits quite nicely here, and reminds me what I need to improve upon in 2020. Aiming the camera 10° further upwards would have helped here.

While all the other schools go back tomorrow, our kids have one more “extra” day of September holiday (ok, technically, the extra day is October) before they go back to the rigours of Term 4 and the rush towards Christmas and summer holidays, so we’re going to do some fun stuff as a family tomorrow.

Obviously, I can’t tell you what the fun stuff is, because then there would be hordes of fans trying to get my autograph and such wherever we ended up going. Look, I have no problem with the meet and greet routine – I love my readers – but it does rather get in the way of family time.

I can tell you for a fact that the 10 weeks of Term 4 will disappear into thin air quicker than your poorly guarded cellphone at the local Spur. 2019 is nearly over, and what have any of us actually achieved?

I’ve done alright. Some photography work, some fitness work, a promotion to the Premiership (by proxy), a decent haircut this morning, and some family time tomorrow. It’s all good.

Best get to it, right?

I’m a great believer in being positive. Not to the exclusion of all reason: I’m a realist before an optimist, but I’m very much an optimist ahead of a pessimist. So with that said, I’m both hopeful and not ever so hopeful about the year ahead for South Africa.

Hopeful because I feel that the vast majority of people here are decent, honest and willing to work towards making this a better place.

Not ever so hopeful because the loony fringes of left and right are out to make any meaningful progress harder than ever.
And to be honest, despite their small numbers, they’re still in the pound seats right now. They have a miserable public to speak to, there’s an election coming up real soon now and a clear lack of leadership at the top of the two leading political parties, while the guy in third place – currently holding 6% of the vote – is happily directing matters via a seemingly sycophantic media hanging on his every rant.
The economy is in tatters, with the promise of more bad news to come in the months ahead, unemployment continues to increase, and the government seems unable or unwilling (maybe both) to do anything about any of it.
Our newspapers and news sites are filled with biased, puerile, inaccurate and sensationalist crap and yet still people read and believe every word. There are a million bandwagons lined up like free Ubers just waiting to be leapt upon and an increasingly depressed and desperate population needing a ride.

But despite all this, I still believe that there is hope. We just need to avoid being dragged down by the really dreadful stuff to the exclusion of all of the good things and good people that there are out there.

Clearly, that won’t happen. But it would be nice if it could.

And let’s also look elsewhere before we bury ourselves in self pity. Not that it improves our situation at all, but it’s not as though we’re alone in having struggled through the frying pan of 2018 only to be shown the fire of 2019.

So I completely accept that things are some distance from rosy as SA heads into 2019, but I don’t think it’s the cataclysmic end that so many people seem to believe it will be.

Unless I’m wrong of course, in which case, we’re completely buggered.