I apologise for the lack of a post today. I woke a little late and now there’s a bit of a queue to use the internet. 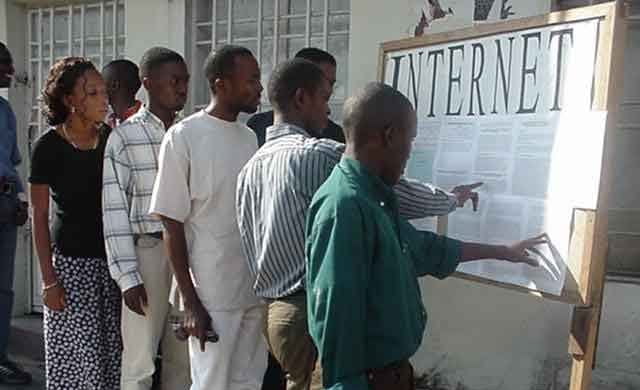 Such is life in Africa.

It seems to me that the unacceptable practice of propagation of deliberate falsehoods to attain various objectives is becoming entrenched in our country.

A letter – which initially appears similar to Alan Knott-Craig’s brilliant first and not so great second – has been doing the rounds here in SA. It purports to be penned by the hand of one Trevor Mallach, “a Shoprite Group executive” and comes with his request to “please pass on to just five friends with the request that they do the same”. Do I hear the faint sound of alarm bells?

The letter is a plea for South Africans to vote in the upcoming elections. Good idea. No problem with that: Want democracy? Use democracy.
In fact, I almost agree with the sentiment:

I swear on my grandma’s grave… if I hear someone (who didn’t vote or couldn’t vote because they were too lazy or hungover to register) complaining at a braai about the government, I will come in from the side with a flying head-butt which will leave you so brain-damaged you’ll join the ANC youth league and vote for Julius Malema in 2013.

But sadly, the rest of it is utter tosh: standard disingenuous “facts”, thinly-veiled comparisons of Jacob Zuma to Adolf Hitler and Robert Mugabe, promises that SA will become another Zimbabwe, that Zuma will commit murder during his tenure without fear of prosecution and will be President “forever”.

And then, when the election comes, vote for anyone except the ANC. You can vote for Vernon Koekemoer or Skippy Peanut Butter for all I care, just as long as no one gets a two-thirds majority!

So, it’s fake – but how fake is “fake”? Well, Trevor Mallach does exist and he does work for Shoprite. I know this, because I spoke to him this morning. It’s not difficult to do this, but it’s no use googling his name – all you get is daft blogs worshipping “his” letter and using cut-and-paste because they have nothing more interesting to share. Instead, I went to the Shoprite website, rang the number on the page and asked to speak to him. Tough.

And that’s where the sad side of this sordid tale comes in. Because Trevor Mallach does exist and he didn’t write this letter. But it’s his reputation and his name which is getting dragged through the mud each time this rubbish is forwarded (and it’s being forwarded a lot!). As soon as I mentioned the letter, there was both resignation and anger in his voice – I’d describe it as a kind of angry, resigned tone. He asked me not to forward the email, asked me to delete it, said he was fed up of hearing about it and that it was all a lot of nonsense. Of course, it’s a futile effort, this thing is whizzing around South African cyberspace like a SAA crew on coke. Just wait til it hits the ex-pats – they’ll have a field day with its rampant misinformation and scaremongering.

Dude, it must be true, Trevor Mallach said it and he’s a Shoprite group executive!!!!!!!

So – if you get this letter – don’t forward it.
Rather forward this explanation and remind people that behind a fake letter is a real person. Thirteen letters where one would have done

The South African Revenue Service (the equivalent of the Inland Revenue or the IRS) actually has a pretty good reputation over here. They rarely get stuff wrong, they get things done quickly, quietly, efficiently. And then they give all the money (all R627,692.8 million of it) to the highly respected Trevor Manuel and he spends it wisely.

This find in the PO Box wasn’t quite so impressive though. Is this what you mean by Stamp Duty, Trevor?

Stuff I have noted over the last few days:

1. The internet in South Africa has been even worse than usual of late. I blamed my ISP, my ISP blamed Telkom and Telkom blamed Ndujani.
It turns out (following extensive research) that Ndujani is a mongoose god, worshipped by some tribes in the Northern Cape. Any claim that Telkom is merely passing the buck is met with the standard, “Please don’t turn this into a cultural issue, Mr 6000”.
More likely is that one (or more) of their ADSL hamsters which keep the internet working by running around their little wheels in Bloemfontein has died or gone on strike or something. Probably over a cultural issue.

2. The Oscars were on. A celebration of Hollywood excess while everyone else suffers the wrath of the global credit crunch.
More salt with your wound, sir?
I’m not a big fan of the movies, but was pleased to see that Kate Winslet finally won something after so many bare-breasted cinematographic moments. Had to be worth it in the end, hey? (But please don’t stop now – you could win again!)
One thing I found shocking was that, even though winning a little gold man surely marks the pinnacle of any actor’s career, Keith Ledger couldn’t even be bothered to turn up and receive his award for Best Supporting Actor. What a snub. They should have given it to someone else. It’s just plain bad manners.

3. I’m concerned over a tectonic shift in my musical tastes of late. Away from decent Indie and Nu-metal towards irritatingly-catchy Brit-pop, hip-hop, rap and pumpin’ House.
As I write this, I have David Guetta’s Joan of Arc on the iPod. Actually, to give everyone credit, it’s actually David Guetta (featuring Thailand). It remains unclear whether everyone in Thailand (pop. 60.5 million) played their part, but if so, then they probably shouldn’t have bothered.
[Mental note to self: Check up on most ridiculous names of “featured artists” for future blog post]

4. Twitter isn’t actually that good. Either you follow too few people and nothing ever happens, you follow too many and everything happens too quickly or one person (no names, sorry) fills your screen with rubbish for the sake of putting something (usually about cooking) on twitter.
I’m left debating whether the very occasional good bits are worth the very regular daily disappointments. Le jury est out, as the French would say.

5. I saw a “collaborative project” in the Art Spot of the newspaper yesterday:

Trasi Henen curates a collaborative project [see?] called I Forget That You Exist’ at the Cape Town gallery, Blank Projects. Participants were asked to engage with the following Dialectic: Dominant culture is a victim of the Will (after Schopenhauer’s The World as Idea and Representation) and therefore perpetually oscillating between Desire and Ennui. Desire is a state of potentiality.
When the desired destination is reached, is this a tragedy?

Sometimes I forget that you exist is a collaborative research project around desire and the heterotopia. Participants are asked to engage with the above dialectic. The exhibition process is ongoing, and contingent, culminating in a closing event. In the two weeks leading up the exhibition, blank becomes the research studio which opens the project to dialogue and interventions.

Something for everyone to think about there, then.

I was once asked (in a 1992 interview for a place at Wolverhampton Poly, no less) if money spent on the Arts is a waste. I wish I’d seen stuff like this before they asked – it would have made a rather stuttered, awkward answer much simpler. (Because there’s obviously nothing more beneficial that Trasi could be doing for the world).

Morning has indeed broken with Cape Town shrouded in smoke from veld fires in Somerset West:

Fires in Somerset West have flared up again after being briefly brought under control, fire services said. Helicopters were unable to assist in fighting the fires because of the smoke clouds, platoon commander Clive Smidt told News24 on Monday morning.

Fire-fighting helicopters unable to fight fires because of the smoke coming from the fires they’re supposed to be fighting? There’s a limitation there: anyone spot it?

Meanwhile, I snapped a quick pic in the rather ethereal light this morning.

Everything is weird shade of peach, the mountain is still partially obscured through the haze and my car is getting covered in ash.

EDIT: Here’s the view from town this lunchtime. Somewhere in there is 1,086m of flat mountain.