The thing is, everyone is going bonkers over a single forecast from mountain-forecast.com, which appears to be the ANN7 of weather forecasting websites: 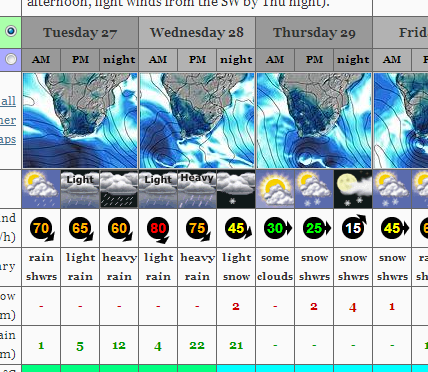 As you can see, they’re suggesting a total of 9 cm of snow (those red numbers) on Wednesday and Thursday nights, and they say:

Te one above is distinctly their best guess for 1087m elevation – which is about as high as Table Mountain is. So there you go.

However, other more reputable sites, such as windguru.cz and weathersa.co.za are merely predicting much coldness and rain for the Mother City.

But before you get all depressed at the prospect of having no snow on Table Mountain again, just like there wasn’t last summer as well, there may actually be a glimmer of hope at the end of the Cableway.

And that’s because even windguru is suggesting that there will be light precipitation over Cape Town on Thursday evening AND they’re saying that it’ll be 0°C at about 1000m elevation as well: 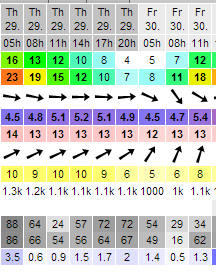 While it is a myth that it actually needs to be 0°C for snow to fall (actually, precipitation generally falls as snow below 2°C) this is certainly cold enough for snow on the summit of Table Mountain to be a possibility this week.

The last snowfall on the mountain was in August 2011.

Break out the skis and the snowshoes. And someone please warn Instagram to get some extra servers on the go.
This could be serious.