And lo, it came to pass that a comment was left uponeth my Facebook by Jonny “Harvard” Faull, regarding the Snakes On A Beach thing in Hout Bay on Monday. Here’s that comment:


And yes, the headline is:

Is this the world’s most dangerous beach?

The ever reliable Daily Mirror [see 6000 miles… passim] cites the “huge Cape Cobra beside the shark-infested sea”. And that’s lovely, but yes, it is an overreaction if you’re just going to base it on those two things. You need to be a whole lot more hazardous than just “huge Cape Cobra beside the shark-infested sea” if you’re going to challenge for this title.
Fortunately for the Daily Mirror headline-writing monkeys, I believe that they were inadvertently correct in their query regarding Hout Bay beach, because it has so much more danger to offer than just a big snake and sharky water.

Let me take you through some of the things that make Hout Bay beach potentially worthy of being the world’s most dangerous beach.

2. The contaminated water.
To be fair, no self-respecting person is going to get eaten by a shark in the shark-infested sea because no self-respecting person would step into the water anyway. I actually was surprised that the snake gave it a go.  That’s because the E.coli levels in the Hout Bay water are through the roof. And there isn’t even a roof (we’ll discuss that later). While many of the Western Cape beaches are clean and shiny (27 of them have Blue Flag status), Hout Bay is not one of them.
Hout Bay is full of poo bugs. Eww.
Danger rating: 7/10

5. The UV levels.
OMG! There isn’t even a roof on Hout Bay beach. That means no protection whatsoever from the sun. And we all know what damage the sun can do to our skin: sunburn, premature aging, melanoma, vitamin D overdose. This is a huge omission by the Hout Bay beach management people and – with summer coming – is yet another reason that Hout Bay beach is right up there with the other most dangerous beaches in the world.
Danger rating: 6/10

6. The Radioactivity.
Can you imagine how ridiculously radioactive Hout Bay beach would be if there was loads of naturally-occurring Uranium just below the sandy surface? Has anyone done any research into whether or not this is the case? Thought not.
So, in the meantime, let’s play it safe by assuming that Hout Bay beach is a seething bed of alpha particles. Lethal (ish).
Danger rating: 8/10

7. The smell of fish.
The local fish processing plant in Hout Bay harbour is wonderfully fragrant, especially on hot, still days.
Technically not dangerous in itself, but wholly unpleasant.
Danger rating: 4/10 (odour may attract bears)

8. The risk of alien abduction.
In the USA, the majority of UFO sightings and alleged alien abductions seem to be in rural areas and states with a higher than average rate of inbreeding. Look, I’m really not casting aspersions here, but I’m just saying that Hout Bay beach might be a bit of a hotspot. *high sixes the local residents*
Danger rating: 2/10

In conclusion, there are many beaches in the world that are really dangerous for any of the reasons given above, but it’s rather the combination of factors that makes Hout Bay beach well worthy of the title “Most Dangerous Beach In The World”.

Well – Snake on a beach anyway. This photo was taken this morning by ‘jogger’ Janice Wagner on Hout Bay beach (the same one you can see – sans serpent – here). It’s a Cape Cobra (Naja nivea) and it was off out for a quick slither along the beach. 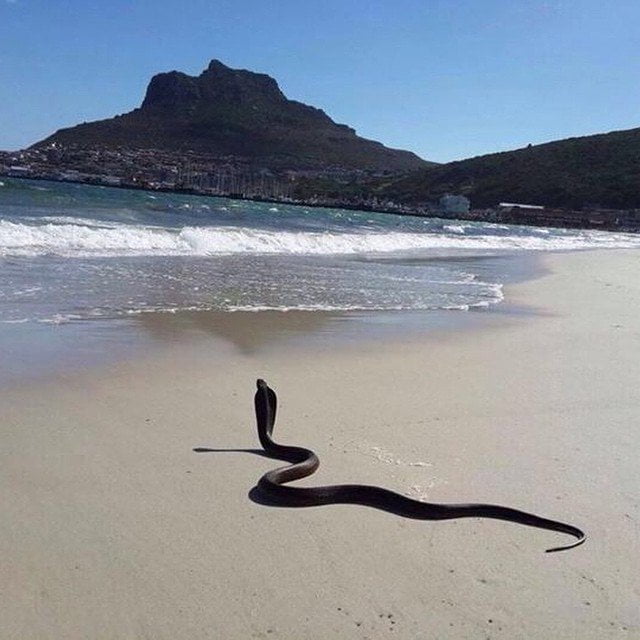 Because of the nature of social media, this is already old news in Cape Town, but it’s worth recording on here for posterity and for our overseas visitors (none of whom will be sunbathing on this beach again any time soon, I guess).

It also raises the question ‘Just where are we safe now?’, what with sharks in the water and snakes on the sand. Although it’s worth noting that our friend above also went for a swim.

Are we now going to have to employ snake spotters as we do shark spotters?

And then there’s the E.coli, arguably slightly less dangerous than the sharks or the snake, but nevertheless still rather nasty. I hope Hissing Sid has taken his antibiotics…

We were at a braai, high above Hout Bay: 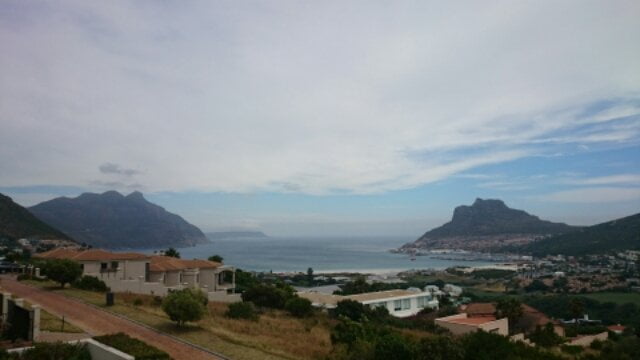 I’m not a big fan of Hout Bay, but you can’t fault this view.
And being this high up, you couldn’t even smell the fish factory.
Double bonus.

Come 1 November 2014, and Cape Town will have its very own ‘foofy-slide’ zipping over the national heritage area on the southern side of Table Mountain near Constantia Nek.
It hangs up to 155 meters above the tree canopy below and stretches over 2,3km. The longest zipline cable on the route is 470 meters.

“Table Mountain” Ja. OK.
But already, I am twitching with mounting excitement.

And, in even better news for fat people, this is an all-inclusive ride – you can join in too:

The cable can carry up to 16 tonnes and will be tested with a 3 ton weight block before opening to ensure the experience is both thrilling and safe for sliders.

If you weigh more than three tonnes, you’ll probably either need to make special arrangements with the owners first, or set up a chain of poorly-rated B&Bs and a hypercritical website all about local eating establishments. Your call.

The new zipline is set to open on November 1st, and they’re already taking online bookings here. And when you pay up, here’s a taste of what you’re in for (Pro Tip: if you don’t understand Afrikaans, just look at the pictures):

Took my folks for a scenic drive around scenic Chapman’s Peak Drive. 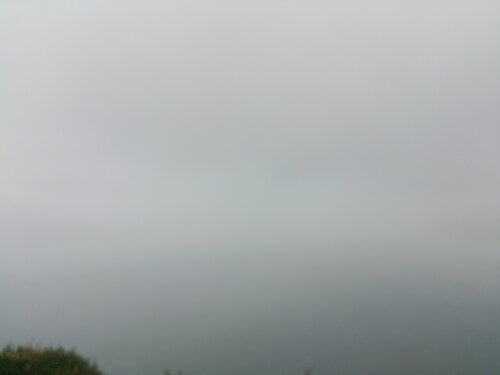 The views were spectacular.