With apologies to The League of Gentlemen…

And oh, well played, that man. 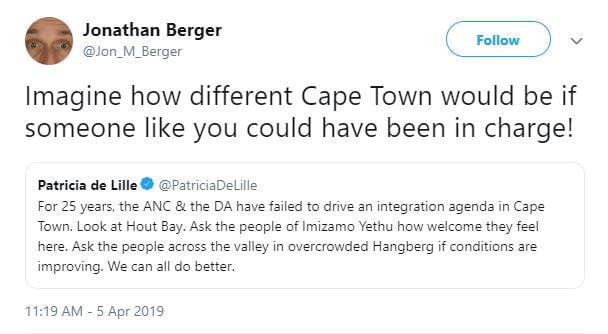 My goodness! Some water for that burn, ma’am?

(for those non-local readers, Patricia was Mayor of Cape Town for over eight years and was Western Cape Provincial Minister of Social Development prior to that)

(but now she’s not with the DA anymore [#grumpydivorce], and is standing against them in the upcoming election, apparently it’s all their fault that nothing got done)

(these things are never funny if you have to explain them)

(but jeez… politicians are shameless, hey?)

So it seems that Cape Town mayor Patricia de Lille didn’t go for my amazing plan which would have solved Cape Town’s water worries for the next 25,000 years.  Who on earth knows why, but never mind. I’m not about to give up just yet.

We’ve all popped a bottle of wine or a can of beer into the freezer to get it chilled quickly, and then forgotten about it. The result is both upsetting and messy – wasted beverage, exploded glass, split can, sticky freezer.
That happens because the major constituent in both wine and beer is (sadly) water. And chemistry tells us that water increases in volume by 9.05% when it’s frozen, whereas bottles and cans just… don’t. Oops.

That increase in volume is key to my plan though. The Cape dams are short of water volume at the moment – that’s literally the issue which is concerning us all going into the summer – so why not freeze all the water that’s in there, and get us an extra 9.05% of volume straight away?

I’ve been doing some rudimentary calculations, and I’ve worked out that with the current liquid volume of stored water standing at 324,455Ml, freezing it all  would give us an extra 29,363,177,500 litres in solid volume. Best bit – we don’t even have to destroy Franschhoek like we were going to do with the iceberg – this extra icy volume will easily fit within our existing dams.

It’s certainly not 25,000 years worth of water, but equally, it’s not to be sniffed at either.

I’m going to pop into the CBD this afternoon and present this plan to Ms de Lille. This is neither rocket science, nor brain surgery. In fact, my biggest issue is which music to do my presentation to: I wondered about Ice, Ice Baby, but I think that Pump Up The Volume suits it better.

If Patricia wasn’t willing to listen before maybe she will now. I can’t be reasonably expected to keep coming up with plans of this level of genius forever.

That’s the headline from iol this morning, and the article underneath it goes on to say that:

The City of Cape Town’s Executive Mayor Patricia de Lille will host an inter-faith gathering of various religious leaders to pray for rain on Thursday at 2pm.

Who’ll be there? Well, various religious leaders including:

Inter-faith indeed. All the major food groups listed there. No atheists, which is a bit awkward in our supposedly secular society, but I guess it might have been awkwarder still (I know) were we represented…

“The residents and businesses of Cape Town have made great efforts to save water but we have to do more and we especially need the rains to come.”

Right. A few issues here. And I’m not going to spend too long on going through these. I’m too irritated to elaborate on stuff. It’ll involve swearing. Even this condensed version may involve swearing. Seriously, I’m literally just about to write it, and it really feels like it will involve some swearing right now.

1. Prayers don’t work. Evidence for this includes the repeated praying for no more terrorist attacks in Europe.

3. And the annual SA Police Service prayer day for no more crime.

4. If prayers do actually work, then why didn’t you pray for rain earlier?

6. Look, I do realise that just because you’re spending your time doing this, it’s not that more practical solutions aren’t being organised: dams being dredged, other water sources being investigated and the like. But…

7. My rates – including my (understandably) inflated water tariff – are paying for you to attend this crap. And that’s annoying, because no matter what you were doing instead of sitting on the bloody mountain with your friends chatting to their various sky fairies this afternoon, it would offer me and the rest of the city’s ratepayers a far better return for our hard earned money.

8. If, when it rains tomorrow, as it is forecast to do (and as it has been forecast to do all week), and you or your god-bothering mates then claim that your Table Mountain meeting has yielded positive, tangible results, I may just go flipping postal. In a very reserved, British way, obviously.

Very restrained on the language there, well done me.

Look, I know you’re not going to read this, Patricia.
I know you’re not going to read it because you never read my towing an iceberg from Antarctica and dumping it in Franschhoek solution to the current water crisis; a solution which I have implored you to respond to on several occasions; a solution which I made up merely for comedic value, and which – although mathematically sound – is laughably far-fetched, but which would still be a better way of addressing the drought than you wasting everyone’s time and money on shouting at the clouds this afternoon.

Ask any (non-whining) South African about the World Cup next year and they’ll tell you two things:
Firstly, it’s going to be brilliant, exciting, amazing; and secondly, Bafana Bafana don’t stand a chance. We’re talking cat in hell, snowball in hell, fishcake in… hell (?) stuff here. No chance. At all. Not even a little bit. Nil. Zero. Zilch.
You get my point. And that’s still one more than Bafana are going to manage*.

But we’re all singing the praises of the South Africa Homeless World Cup team this week, who are fresh back from Milan, trophy in hand! Fantastic stuff. That is, until you read the small print and discover that they won the trophy for finishing 16th.

It’s all enough to make you wonder if they didn’t just steal the trophy. In the traditional South African way.  I’m not suggesting that they did nick it or anything, but getting a trophy for finishing 16th? It does sound a bit fishy.

You must forgive me, because I recognise that even being there representing their country was a special experience and an honour for those guys. And I can only salute the great positive work that NGO’s and charities do in organising these sorts of events. But, being a traditionalist at heart, I have to say first, second, third… fair enough. But a trophy for finishing 16th? Well, that devalues thing a little for me.
16th deserves more of a certificate and a pat on the back. A well done and thanks for turning up but there were another 15 teams who were better than you kind of thing. Not a trophy.

So South Africa didn’t win. They didn’t even come close. But there are those who can overlooked this minor detail if it brings in some nice publicity. ID leader Patricia de Lille for one:

I am so proud of our National Homeless Soccer Team, who persevered right until the end of the World Cup, beating Malawi in the final.

Poor deluded Patricia de Lille is still under the impression that her political party won the recent election and can’t understand why Jacob Zuma is claiming to be President.
Fortunately, for the purposes of accuracy in this article, reporter Harriet McLea helped de Lille out by adding the word “(match)” into the published quote at an appropriate point.

All a bit of a joke as far as the competition goes, then. But this surely offers some hope for Bafana Bafana in the real World Cup next year. After all, if you get a trophy just for finishing 16th, maybe they won’t be empty-handed at the end of the 2010 tournament.