I’m busy, and I’ve not had chance to blog yet today. There was a visit to the knee doc (but more of that later), there was a lot of lab work, there was other stuff.

Now it’s lunchtime and it’s become evident that no-one has been bothered to look at 6000.co.za this morning at all.

I put this down to the fact that the political news has been moving at a breakneck speed here in SA, and people are choosing to try to keep up with that rather than keep up with their favourite blog.

But if you’re not going to read, I don’t see why I should waste my time writing.

Shall we try again tomorrow once he’s gone? [audience laughs]

What? It might happen.
This country never fails to amaze me (not always for the right reasons) (but still…).

2017 has been yet another rough year for everyone, everywhere across the globe. I guess then that the only individuals who are even vaguely happy are the astronauts on the International Space Station, but even they have to come back down to earth (figuratively and literally) at some point.

But I’d wager that the people of South Africa have had it worse than most, on average. On top of all of our usual daily problems of unemployment, poverty, crime and getting distracted by the outstanding scenery, we have descended deeper into so-called State Capture, and with it, many the associated depressing economic consequences, which in turn have exacerbated the unemployment, poverty and crime.

It can like to be a vicious circle of note.

Things may seem bad right now, and that’s precisely because things are bad right now. But South Africa has a history of bouncing back from these sort of seemingly impossible-to-bounce-back-from situations. Hence this sort of positivity from this brilliant Nando’s advert.

There’s a lot in there that South Africans will understand. But it will leave a lot of 6000 miles… readers overseas a little bewildered. So, why am I posting it, knowing that half the people who see it will already have seen it and it will mean nothing to the others?

Well, because I like it and I know that in n years time, someone – probably in a pub somewhere in Bloemfontein – will go:

Hey – remember that Nando’s advert? The one just before JZ got dumped as President? That was so funny.

…will google “Nando’s State Capture Advert” and will arrive here and enjoy the above once again. For old times sake.

If that’s you: Hi. We’ve been waiting. Amazing how prophetic the advert was, hey? We really did manage to fix out s#*t once again.

I’m flying to Dubai today, and that’s got me quite excited.

Travelling is exciting anyway, but Dubai is especially thrilling.

Reason: Loads of ANC-related people seem to have gone to Dubai in the past, and returned with lavish gifts, bonuses, jobs and property. (Not literally property, obviously, but the legal documentation thereof.)

Now, I’m not an ANC-related person, but I really don’t see how this will adversely affect my chances of hitting the big time in the commercial hub of the Middle East. It seems to me that all I have to do is attend a meeting that I will thereafter swear never took place, say yes to the right people, and suddenly Atul and Ajay are my metaphorical uncles.

Ker – if you’ll bear with me for one more moment – Ching.

I can’t wait. I might even take a R600m bribe when I’m offered it.
Well, it’d be rude and wholly ethical not to, wouldn’t it?

And I’d hate to be rude.

I’ll be back presently, and in the meantime, blog posts will obviously continue, as they always do. Once I’m completely captured, I’ll be able to travel a lot more to Dubai, launching 6000.ae before potentially retiring there and avoiding numerous criminal charges.
Impunity and immunity can like to be my middle names.

I mean, have you seen their extradition policy with SA?
No? Exactly.

Julius Malema, writing about a proposed City Press boycott in 2012:

Our forefathers thrived for many years under difficult moments because they cherished free press and freedom of expression.
Banning newspapers simply because we disagree with them and boycotting them on the basis of believing that our conception of truth is absolute really poses a real threat to our democracy.
Even when we expressed utmost anger against a BBC Journalist in a Press Conference incident which we later apologized for, we never took a decision to ban the BBC or the Journalist from our Press Conferences, because we need to protect everyone space to disagree. 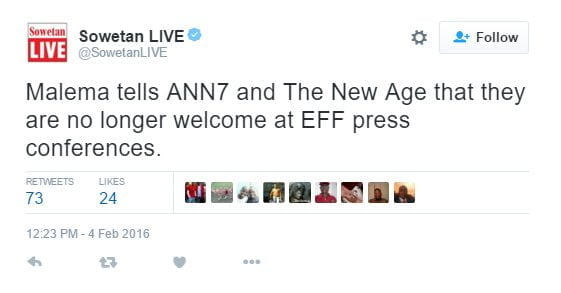