Earlier today, the JG Zuma Foundation – the somewhat shady organisation with no official headquarters or web presence (ok, there’s a twitter account) – set up to spread happy happy joy joy stories (wholesale propaganda) about our horrifically corrupt ex-President, posted this image (which I have slightly adulterated), requesting donations towards legal fees as JZ (occasionally) tries to fight the numerous charges against him.

He needs your money.

Great news: you don’t have to be these people.

If you have money to spare (in this economy, ruined by guess who? ha!), then please don’t give it to JZ.

Give it to The Haven and help homeless people in Cape Town who don’t have a R250million mansion to live in.

Or give it to Gift of the Givers, who are doing remarkable work all over South Africa and overseas.

Or even just go and treat yourself to a burger or something. You deserve it.

Just please – please – don’t give it to Jacob.

And this from today, the Constitution fighting back after 24½ years of hurt, here:

What happens now?
Meek jail time, a midnight flight to DXB, the complete implosion of the ANC and/or the beginning of the Civil War?

Zuma has 5 days to hand himself over. Grab some popcorn and let’s watch the fun* together.

But I’m so busy. If only there was some quick and easy way to precisely express my true feeling about this decision.

It’s Election Day in South Africa, and although we all know who the winners are going to be, a quick perusal of the manifestos and promises of each and every party contesting today’s election clearly shows that whichever one gets in, the citizens of this fine land are going to be living in Utopia for the next five years.

Crime, poverty, unemployment, corruption and laughable foreign policy, which have all been the bane of our collective lives for the past 2½ decades will be swept away. The appalling track record of service delivery (or rather “non-delivery”, lol) will be a thing of the past. I’ve checked what we’ve been promised by the new government and I can tell you that the future is looking pretty bright. If we have any electricity.

Please be aware that this time around, the majority of the population will not be voting for Jacob Zuma’s ANC. Oh no, they’ll be voting for Cyril Ramaphosa’s ANC.
This is the novel, clean, corruption-free version, with only half of JZ’s cronies in the hotseats. And a leader who saw nothing dodgy going on during his four years as Deputy President (despite… well, see the link above). And who has prosecuted and jailed exactly zero of those implicated in State Capture and corruption since his promotion to President 15 months ago. And who seems regularly amazed at what a crappy state the country is in.

I can’t wait. The next five years are going to be absolutely amazing.

Many of you will remember the 6000 miles… popular PistoriusBalls blog post series, with twitter offerings amassed from several (or more) journalists at that infamous trial.
Given the likely length and complexity of the Zuma trial, I have no plans to do a similar series for JZ, but if I did have such plans, I’d be starting right here: 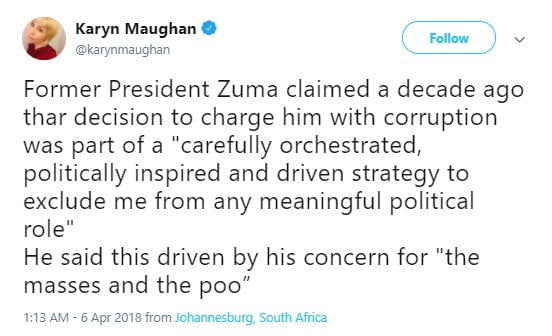 I’d be concerned about that too if I were him. The shit has really hit the fan.