Generally, I have to say that the agency responsible for encouraging you to go down south – “Discover Cape Agulhas” – does a pretty good job. And while the drive through the rolling hills of the Southern Cape is usually very enjoyable, I’m really not sure what they were thinking by posting this quote over (arguably) their biggest draw card this morning: 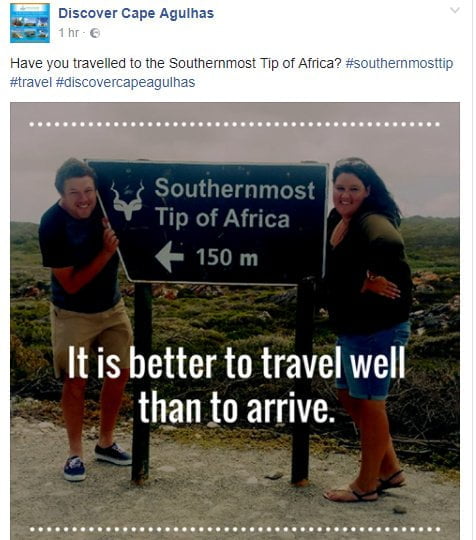 Let me set the record straight (if you haven’t worked it out from my first paragraph already):

Yes, the journey is great, especially if you travel well. But arriving is actually what it’s all about – we’ve been through this before. Don’t be put off by the thought of a decent journey being ruined by eventually getting to Cape Agulhas. Because when you get there, it really is very good – I promise.

Despite whatever the tourist agency are hinting at here.

Left-leaning UK Facebook is knee deep in election propaganda at the moment. A lot of it centres around the assertion that Theresa May “is evil”: a convenient strawman argument, distracting us neatly from the fact that in the real world, Jeremy Corbyn’s policies are laughably pie-in-the-sky, laughably costed and seemingly aimed at making the UK a complete no-go zone for business.

But how do we not know this already? We read the papers, don’t we? Why haven’t they told us about Theresa’s nastiness?

So, now that we’re a global community, and you might find yourself reading a UK newspaper website from overseas, let me just quickly fill you in on what to look out for with a quick guide to the usual suspects.

But then there’s one more, quite popular newspaper called The Independent. It used to be a part of the Dead Tree Press, before going online only from last year. And, because of its name, and its infamous motto: 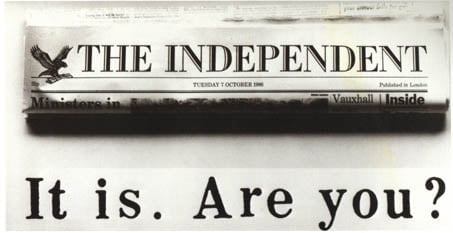 …you can probably already guess at its lack of political affiliation.

But be careful, because this, as the quote goes, is “the biggest misnomer since Pussy Galore”. With each of those other papers, you get to make your own mind up, there’s no hint of which way they’re going to try and sway you. And of course, you should never believe everything you read anyway.
But please, when it comes to The Independent, don’t let your critical standards slip, just because of the title.

More from Facebook, and from my favourite group thereon, previously mentioned here.

Here’s an image shared to the group by one of its members. 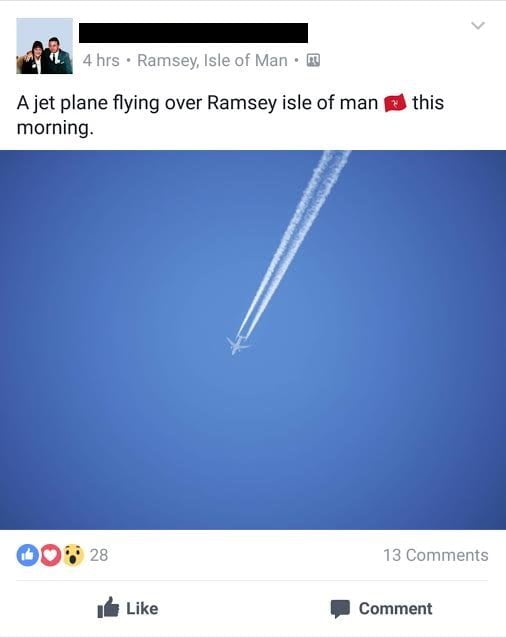 Given the geographical position of the island in question, together with the profile of the aircraft, it’s most likely to be a 777 going from somewhere in Western Europe to somewhere in the USA.

But this is just a post from a guy who has spotted the plane going overhead, pointed his camera heavenward and pressed a button. It doesn’t matter where the plane is going from or heading to. We don’t need to know: the strength of this image is its sheer simplicity

But then, there’s always one, isn’t there? Because in the comments below, this:

I must admit that I hadn’t even considered this aspect of the situation.

The picture was ok. Look, I wasn’t hugely impressed with it, but it was ok. Just nice. And, being me, I had thought a bit about the type of plane and its likely journey. But as I mentioned above, that’s not what matters. And I was inadvertently right.

Because what actually really matters are the jet waves polluting our sky. Yeh?

Air travel isn’t the cleanest form of transport. It’s getting there, with the all new A350-10 series belching a whole 25% less carbon dioxide than its predecessor and such, but putting couple of hundred tonnes of aluminium and suitcases 10kms up into the sky and then moving it several thousand kilometres is always going to be a fuel intensive process. I knew that. But I hadn’t thought about the jet waves, polluting our sky. And I’m sure I wasn’t alone in this. Because no-one ever thinks about the jet waves, do they?

And yet, there they go. Those jet waves. Polluting our sky.

When the UK PM called a general election recently, I spotted this line on Facebook:

Please god let the “great” British public stay in bed and let the rest of us make a sensible decision.

…which, you know, is a bit demeaning to a lot of people who might not happen to share the same point of view as you do.

The individual in question voted Labour in the last election (they lost) and voted to remain in the EU in the recent referendum (that side also lost). Since then, that person’s timeline has been a cascade of anti-Conservative (they won) and anti-Brexit (also a winner) stories and articles.

And that’s fine. Each to their own.

Really, my only problem comes when “Remainers” protest about the steps that the Government have taken towards the UK leaving the EU. Yes, the referendum was a close run thing, and there are probably lessons that we could learn from that when running future referendums, but it still finished 52-48. That means that a majority of people voted to leave the EU, and thus, the Government should be taking steps to do so. That’s what referendums are for. That’s how they work.

Look, I’m sorry for you that there weren’t enough people sharing your point of view to swing the vote in the way that you wanted. Democracy can be a real bummer when more people vote the other way.

But then imagine, if you will, that the Remain vote had won 52-48 (or whatever). If more people had voted to keep the UK in the EU. Imagine then that the UK Government had ignored that majority and gone ahead with Brexit anyway.

Pandemonium! And rightly so!

Having asked the question and got the answer, how could the powers that be drive their fat political steam roller over the wishes of the British people?

And yet that’s exactly what you’re demanding must happen, simply because the result didn’t go your way. Simply because “the ‘great’ British public” chose to wake up that day and spoke their mind.

But I find this idea that your side holds some sort of intellectual or moral high ground over the other simply because the viewpoints don’t agree is rather pompous and actually counterproductive. Some people argue that it’s one factor as to why Trump won the US election.

But to be honest, for me, it’s less about the collective effect of these sorts of protest (which has been negligible anyway) and more about me finding out a bit more about people I know on Facebook. And that’s no bad thing either.

Look, we’ve covered this before.

We noted the city’s request for prayers here:

Why haven’t our religious leaders been praying for rain already? And if they have, where’s the evidence? Who’s withholding the damn rain anyway, and why?

And we added a touch of sarcasm here:

Tamboerskloof vicar Rev. Denise Woodhouse stated that she had been instructed by her senior clergy to hold off any specific reference to rain in her Sunday prayers “until April or May”.
When it was pointed out to her that this was rather convenient timing, given that that’s when the seasonal rains usually begin anyway, she replied, “Yes, isn’t God amazing?” and hurried off to help with pouring the tea at the Women’s Auxiliary meeting.

But the weird thing is that with just n days of water left, people are still genuinely suggesting that prayer is the answer to the current water crisis: 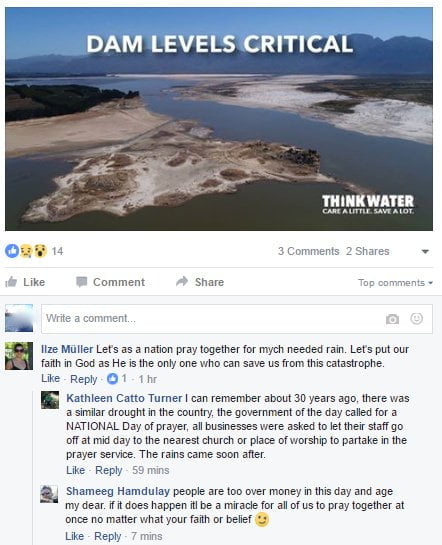 Exactly what do these people think is responsible for this crisis? The underlying cause of the lack of water is simply a lack of rain.

Given that we are advised to “put our faith in God as He is the only one who can save us from the catastrophe” (as He did just after that day of prayer about 30 years ago), I’m left wondering why He hasn’t done something about this already.

Is He really sitting up there in heaven, omnipotent, but waiting for us all to worship a bit harder before He sends any precipitation to Cape Town? Are the recent floods in Gauteng a sign that they prayed harder or better than we did, or is He just trolling?

Behold what I am capable of, just up the N1! Enough rain to fill their dams (and sweep innocent schoolchildren to their deaths), but no: you’re not having any until you get yourselves to church and beg for it. And, if you’ve already been to church and begged for it, then go again and beg a bit harder.

And then, when it does eventually rain, you will praise me for granting you watery salvation, conveniently overlooking all the times I ignored your repeated and increasingly desperate prayers over the past few months.

But that’s exactly what Ilze Müller and her kind will do: drowning (pun intended) in religious confirmation bias, defending the indefensible, brainwashed and blinkered.

Still, if I can get an afternoon off work on the strength of pretending to participate in their ludicrous charade, I’m obviously all for it.