What are our swimming pools short of at the moment?

For several months now, we haven’t been allowed to top swimming pools up because of the water restrictions and the ongoing drought. And fair enough too. Luxuries should be the first thing to be sacrificed in times of strife.
Actually, our small pool is still brimming, thanks to the pool cover I purchased over a year ago. Evaporation is next to nothing and the whatever rain we do get has been enough to keep it full.

But what if you don’t have a pool cover and your precious water has gone and done evaporated?

Well then you buy water from an (allegedly illegal) water delivery service to fill it up again.

Filling a 30 000 litre pool in Grassy Park would cost R7000. The total includes the transportation charge.
We have a 24 000 litre trailer with three compartments which hold 8000 litres. We deliver to any area in the Western Cape. We only work with cash payments. A recent fill-up we did was in Brackenfell and it was a 24 000 litre pool, the customer paid R6000.

My pool isn’t big, but it is slightly bigger than those volumes featured. My pool cover cost R1500. Just saying.

I have to admit that I am actually rather impressed and even a little amused by the entrepreneurial spirit shown by these guys, although not by their apparently nefarious activities and their exorbitant rates.
Also, cash only seems to be a simple and legit way to do business, hey?

Anyway, now that they’ve been outed by the local media…

The Daily Voice spoke to the owner of Bulk Water, Itsik Tsour, who stated the company was licensed. When called back to request proof of the licence, both numbers of the business went to voicemail.

…it seems unlikely that they’re going to be topping up any more local pools in the foreseeable future.

Big shout out to Andrew Sokolic, apparent head honcho at the WATER SHEDDING WESTERN CAPE Facebook group, who, it would appear, has chosen to copy and paste this popular post from my blog and pass it off as his own work to his 59,000 followers, thus: 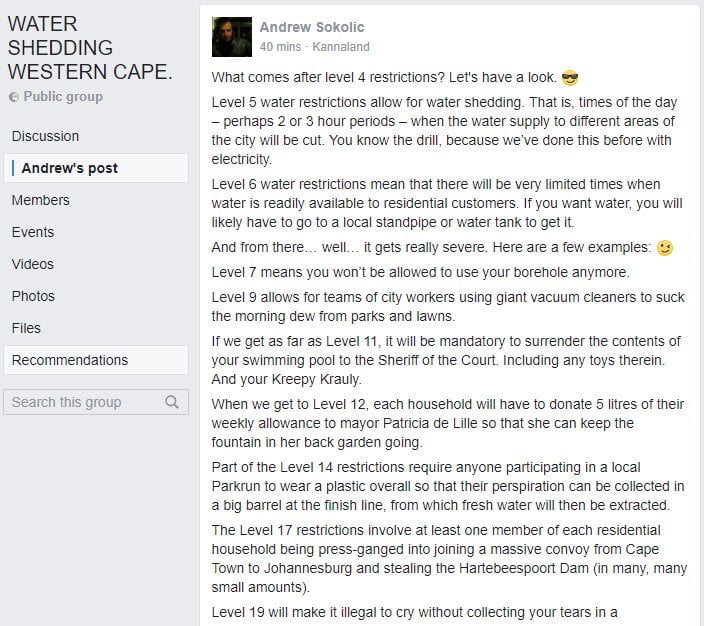 Well, they do say that shamelessly ripping off other people’s work is the sincerest form of flattery (or something), don’t they?

The good news is that everyone seemed there to like it. So if you’re in his group, why not drop a comment on the post, telling everyone where you saw it first? You can even point him (and them) to this post.

Thanks. And have a great day.

UPDATE: A ‘credit’ has appeared at the bottom of the post. It wasn’t there before. You can click the little drop down menu on the post and click “View Edit History” to watch it appearing, about an hour after the original was posted.

Thank you for all the fuss you guys kicked up. It’s been fun. 🙂

h/t Richard for the heads up.

I’m not going to go into the whole “there’s a drought” thing, because I have done that already. Several times. If you’re down here in this corner of SA, you’ll know that we’re already on Level 3b Water Restrictions. But with winter now just around the corner and still no sign of any meaningful rain (those prayers are really helping us out, hey?), the City looks likely to move to Level 4 restrictions real soon now.

Level 4 means no using potable water outside at all. For anything. At all. Ever.
And any water you do use (indoors) will cost more too.

But this got me thinking. Level 1, 2, 3a and 3b restrictions have had only a very limited effect on the dam levels, so what if Level 4 fails too? Just how high can we go?

I went down to the basement of the monolithic Municipal Building in Cape Town CBD and did some rudimentary research.
Here is some of what I discovered…

Level 5 water restrictions allow for water shedding. That is, times of the day – perhaps 2 or 3 hour periods – when the water supply to different areas of the city will be cut. You know the drill, because we’ve done this before with electricity.

Level 6 water restrictions mean that there will be very limited times when water is readily available to residential customers. If you want water, you will likely have to go to a local standpipe or bowser to get it.

And from there… well… it gets really severe. Here are a few examples:

Level 7 means you won’t be allowed to use your borehole anymore.

Level 9 allows for teams of city workers using giant vacuum cleaners to suck the morning dew from parks and lawns.

If we get as far as Level 11, it will be mandatory to surrender the contents of your swimming pool to the Sheriff of the Court. Including any toys therein. And your Kreepy Krauly.

When we get to Level 12, each household will have to donate 5 litres of their weekly allowance to mayor Patricia de Lille so that she can keep the fountain in her back garden going.

Part of the Level 14 restrictions require anyone participating in a local Parkrun to wear a plastic overall so that their perspiration can be collected in a big barrel at the finish line, from which fresh water will then be extracted.

The Level 17 restrictions involve at least one member of each residential household being press-ganged into joining a massive convoy from Cape Town to Johannesburg and stealing the Hartebeespoort Dam (in many, many small amounts).

Level 19 will make it illegal to cry without collecting your tears in a tupperware container (the container used for this purpose must be pre-registered with the city using Form L19-6b, available from the Water & Sanitation Department offices) for recycling.

Level 23 means that the City can legally harvest and press Fynbos from the local Table Mountain National Park and collect the juices, from which water will be extracted. The pulp will then be donated to the hippie communities in Noordhoek and Kommetjie where it is routinely used instead of soap. And deodorant. And paint. And food.

At Level 26, residents will only be allowed to drink grey water.

At Level 27, residents will only be allowed to drink black water.

At Level 28, residents will only be allowed to inhale fog.

At Level 29, residents will only be allowed to drink sand.

Level 30 makes it illegal to live in Cape Town.

Of course, all this unpleasantness could easily be avoided in Cape Town mayor Patricia de Lille would only take on board (or even acknowledge) my brilliant plan to solve the water crisis for the next 25,000 years. Just like the UAE have.

In order to understand the thinking behind my idea what has just single-handedly solved the local water crisis, you need to be aware of a couple of points.

Point 1: There is a water crisis in Cape Town. I may have repeatedly mentioned the drought and the ongoing – and constantly more stringent – water restrictions somewhere on the blog previously.
The dams are down to 37%. We need water.

Point 2: There’s an absolutely massive chunk of ice about to fall off Antarctica.

Beagle-eyed readers might already see where I’m going with this, but you’re too late. I’ve emailed everyone who matters in this (fairly obvious with hindsight) plan of mine. Stakeholders and roleplayers are on board. Some of them quite literally.
I’m talking about the Smit Amandla Marine Salvage (and now Iceberg Towing) guys; I’m talking about the Mayor of the Cape Town, Patricia “Peppermint Patty” de Lille (I also gave Empress Helen a buzz, just to keep her in the loop); and I’m talking about several local artisanal gin manufacturers, who – together with their tonic making colleagues – would surely not want to miss out on this opportunity to have pristine Antarctic ice freshly-delivered right to their metaphorical doorstep, courtesy of global warming and the newly-formed 6000 miles… Ice Company (Pty) Ltd.

I’ve been doing some rudimentary calculations and I reckon that the distance from the Larsen C Ice Shelf (for it is that what is breaking) to Cape Town is a distance of about 6000…. [audience hold breath expectantly] …kilometres [audience sighs with disappointment]. 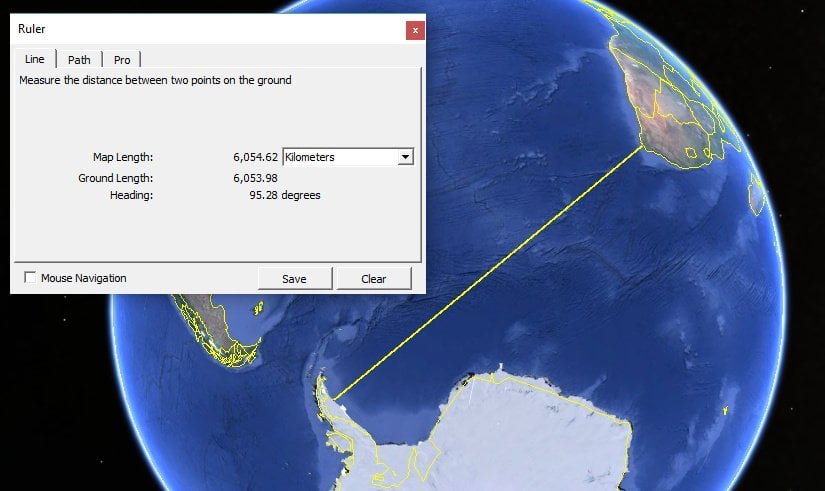 That’s not so far, and the amount of ice that’s going to break off, while difficult to accurately estimate, is certainly substantial enough to warrant the effort of towing it to Cape Town. The depth of the broken ice shelf is almost a kilometre, and it’s going to be between 120-150km long and about 75km wide.

A further rudimentary calculation suggests that it therefore has a volume of 8,400,000,000 cubic metres. That’s 8.4 billion megalitres. Moist.
We can’t (and mustn’t) get carried away though. Remember that ice is an expanded version of water. A version of water that’s 9.05% expanded.

Still got to be worth it.

There are a couple of logistical challenges to overcome, I admit. It’s quite close to Argentina and they might want it, but then again, so are the Falkland Islands and they want them too, but they’re not having them. Or my ice shelf. Hard luck.

Then there’s the issue of where to store it. Ideally, what we need is a nice long, deep, three-sided valley that we can build a big wall across the end of. Franschhoek will do. Franschhoek, with its outrageous faux French accents and that ridiculous double H nonsense in the middle.

True, we’ll lose one of the scenic gems of the Cape, some of the best restaurants in the world and some truly amazing wine farms… 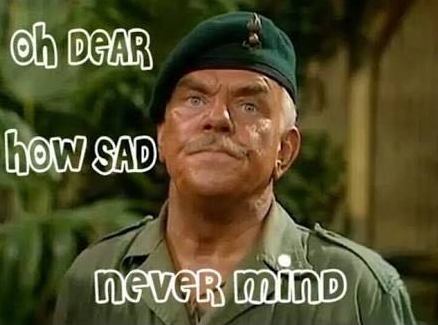 …but on the plus side, we’ll have water for the next 250 centuries.
A worthwhile sacrifice, I’m sure you’ll agree.

This particular idea is mine, but the genre is not new. As this article informs us:

Long-distance iceberg towing is one of those ideas that will not die but never really springs to life either. It exists in a kind of technological purgatory, dressed up in whatever technology is fashionable during an epoch and resold to a happily gullible media.

Pretty much what I just did in the 450 words above, then. And pretty much what Hult and Ostrander did in 96 pages back in 1973. True, their idea has never caught on in the 44 intervening years, but then they never had the power of social media available to make their case.
And once you get some middle-aged white people in Constantia – desperately concerned at the state of their lawns – on your side, once you get Facebook groups and online petitions going, once you bombard Cape Talk and Carte Blanche, those bastions of public opinion, with your fantastic plan to provide water for the Cape for the next nine and a half million days, (and once you’ve silenced the whinging residents of Franschhoek) I think we’ll come up with a plan to get the Larsen C Ice Shelf to the Western Cape fairly quickly.