There are lots of online things happening to entertain you and your family during these difficult times, but none so far has topped this one for me.

It’s only a LIVE GOAT CAM!

Fairview‘s goats are a big draw for the Paarl wine farm, and visitors had been missing them. No longer though, because now there is GOATCAM and you can watch the goats at play on the famous tower, on the bridge and – in my experience this morning – hiding behind stuff for ages and ages when you need to get a screenshot for your blog post. All with an empty car park backdrop.

It’s rather addictive. Have fun.

Construction of what will be Cape Town’s tallest building at 150m and 34 floors, Portside, has begun.

You’ve been able to read about it here for ages, but now, thanks to the webcam of (very) local resident Wannabe Bond, you can watch it too. 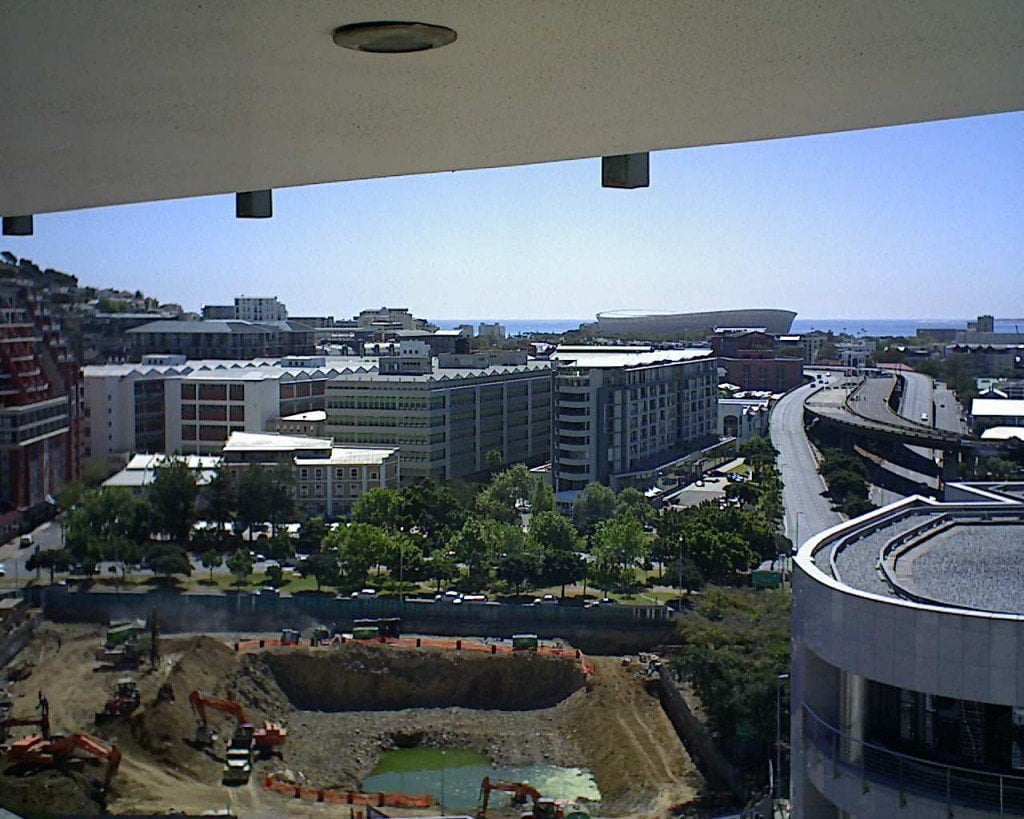 I have it on good authority (his) that he’s doing some behind the scenes timelapse stuff as well. Awesome!

Please give him some traffic as some small recompense for building noise of the next 4 years and the loss of his beautiful view of the stadium and (more importantly?) the Fireman’s Arms.

I was delighted to read Luke Alfred’s inspired and inspiring piece on the South African media’s view of the 2010 World Cup in yesterday’s Sunday Times, not least because it neatly sums up a lot of stuff that I’ve been moaning about for ages.

You may have noticed that when it comes to the 2010 Soccer World Cup there is an endlessly circulating merry-go-round of stories, each with its own shape and unique place in the system.
There is the tryingly familiar “stadium budget” story with quotes by ex-deputy minister of finance Jabu Moleketi; there is the “Sepp Blatter mildly reprimands the organising committee” story, and the grotesquely amusing “plan B” story with its many denials.

Interestingly, I note that we are not the only ones to suffer with these stories. The plans for Euro 2012 tournament, to be jointly hosted by Poland and Ukraine are plagued with the same issues; who could forget that construction for the Athens 2004 Olympics was miles behind schedule (which we’re not) and they still managed to stage a thoroughly successful event? But it’s one of the duties of the world’s press to find the worst in everything and to sensationalise minor events in order to make mountains out of molehills and sell newspapers. And it’s something that the South African press are especially good at.

With sport to some extent replacing nationalism (or being one of the ways in which the nation expresses itself in these post-nationalistic times) the stadiums for the World Cup will express the best of what South Africa has to offer as the century progresses.

They’ll become monuments by which the world recognises this country and by which we define ourselves.
In this sense, debates about what they will cost and how they will be used are profoundly beside the point. Despite the threadbare narratives of the present, stories of striking workers and an underachieving national side, the World Cup will be a pivotal event in the history of post-apartheid South Africa, a time that future generations will look back on with justifiable pride.

So besotted are we with the present that we can’t see it now, but over the long arc of time our children will look back on 2010 and tell their children “I was there”.

Alfred makes a good point, but no-one’s listening. There’s more to life than the present, no matter how tough times may be for many in SA right now. One of the major benefits of 2010, aside from the immediately obvious tourism and sponsorship revenue and its spin-offs is a shared national experience which will generate pride in the country. Our kids have yet to be tainted with the negativity running deep in the veins of the South African media and its followers. And it’s the children’s reaction as they view things with that objective innocence which will be the true marker of the success of the 2010 tournament.

It’s my intention to expose my son to as much of the atmosphere and spectacle as I possibly can.
He’ll be 4 years old and just beginning to form his first “proper” memories and I can think of no better time, place or event for him to remember. It’s going to be an amazing experience. Looking back to my own football-dominated childhood, I can only dream about having experienced a World Cup on my doorstep. (Yes, I was born well after 1966, thank you very much!)

Down the line, my son and I will watch rugby, football, concerts and gladiatorial events possibly involving tigers and pointy sticks at the Green Point Stadium. And while each event will be special in some way, the memories of 2010 that they trigger may never be matched.