Just found this in an old email folder: 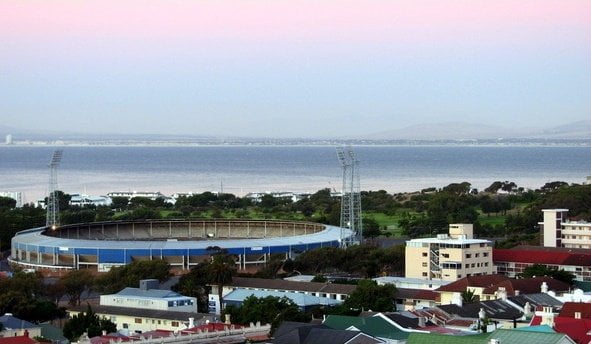 As the opponents to the new Cape Town Stadium built for the World Cup asked at the time: “Why can’t we just use the stadium that’s there already?”

Beats me – it looks great.

The Slug & Lettuce in Green Point opened in December, but unless you are a regular at Ultra Liquors next door, you’d probably never know it. Somehow, I seem to have become aware of it. Hmm.

Of course, for all those Saffas who did their stint in the UK, most likely working out of somewhere with a SW postcode, “The Slug” was a favourite haunt. Now the idea has been exported back to South Africa, where presumably hordes of expat English will descend on the pub, get hideously drunk, be arrogant about their country’s sporting prowess and then dance topless on the bar.

It was thankfully quiet when we popped in there for Valentine’s Day lunch. Mrs 6000 was immediately drawn to the S&L classic Snakebite & Black, while I settled for a draught Peroni (they also have Jack Black on tap). The pub itself is tiny, but the welcome was warm and the service excellent. The tapas menu looks interesting and I would highly, highly recommend the chili poppers, the mere mention of which is making my mouth water in front of the Winter Olympics highlights this evening.
We also tried the sweet potato crisps, which were great.

Mains were a superb cheeseburger and a standard, but enjoyable calamari. We probably would have stayed for dessert, but by this time, Mrs 6000’s third snakebite & black had gone to her head and we wandered down to Three Anchor Bay where I took advantage of her inebriation to comprehensively beat her at Putt-Putt.

The Slug will need to get a few more punters in if it is to survive. On a strip where there is a bar every few yards, some advertising wouldn’t go amiss. Apparently when there is an event on at the stadium, it is packed, but unless it manages to reproduce those numbers on other days, it will quickly fall by the wayside. And that would be a pity.
The trick will be keeping it open until June, when it’s sure to be a big hit with the visiting fans. I’ll certainly be making it my pre-match drinking haunt. Whether the match is in Cape Town or not.

It seems that Saturday’s rugby game may have been the final nail in the coffin for Newlands – traditional home of the Western Province Rugby Union. Previously, the Union had steadfastly refused to consider any move from the Newlands ground to the new stadium. However, popular South African rugby website keo.co.za thinks the friendly game at the new Cape Town Stadium may have forced their hand:

It was impossible for the 40 000 people who attended the pre-season game not to draw comparisons between the new stadium and WP’s home ground on the other side of Table Mountain. Quite simply, the one is modern, light and uplifting, while the other is old-fashioned, dark and depressing.

There is no reason for the rugby not to move from Newlands save for tradition. As has been remarked upon in the comments on this post, change is never easy to accept – especially where such a long and proud history exists – but there are very few occasions when clubs move to new grounds and stadiums and management and fans look back and are unhappy with their new home.

Newlands is inevitably going to suffer the same fate as those other rugby relics, and it’s time WP administrators accept this. They need to start preparing for the future, and the future of WP rugby – whether they like it or not – is in Green Point.

The Stadium would also benefit from the move and has already demonstrated that it can comfortably handle a big rugby occasion.
Having the Stormers and Western Province as an anchor tenant would be a huge bonus. The Stormers could fill the stadium for many of their Super14 fixtures and it would inevitably attract other large rugby events such as international matches.
Meanwhile, the Newlands Stadium site would be of huge commercial value as real estate.

All it takes is the courage to make the move.

How any rugby fan could possibly ever complain about vuvuzelas after yesterday’s inaugural rugby match at the Cape Town Stadium is beyond me. At least they make you realise that you’re at a major sporting event.
As for yesterday, I have experienced more atmosphere on the moon. Not personally, obviously, but my good friend Buzz Aldrin assures me that it was one long party while they were up there, although bodily functions were a little difficult to perform.
What a sterile occasion. Sure, rugby fans can drink a lot, but they are seemingly almost completely silent during big games. 40,000 of them, mainly white, quiet as mice for large periods of the game. When the stadium announcer has to organise and then continually propagate a Mexican Wave, then you know that something’s not quite right.

In fact, the biggest cheer of the day was for Emperor of the Western Cape, Helen Zille and ineffectual City Mayor, Dan Plato, who entered the field pre-game to a bizarre Medieval-style regal trumpet fanfare, then gave overtly political speeches about how great it was to have a stadium, frequently interrupted by sycophantic and raptuous applause.
Quite where those speeches were for the football a couple of weeks back is beyond me, although every cynical bone in my body (and I have a few) is screaming something about the “wrong audience”.

Bryan Habana also got a huge ovation when he came out in the first half for a bit of a warm up. Later in the match, he came on for 20 minutes and didn’t touch the ball once. Obviously, he would have scored loads of tries if he had touched it though, because he’s Bryan Habana.

For those of you that don’t follow me on twitter, my son was horribly ill on Friday night and Saturday morning and wasn’t allowed to go to the match (Doctor’s orders). Both he and I were hugely disappointed. (Our plans for Saturday morning will also have to be rearranged). So he didn’t pass his World Cup readiness test.
The Stadium, on the other hand, did (I think). Yes – there were traffic issues on the way into town – mainly thanks to the disco effect traffic lights at Buitengracht and Western Boulevard – and yes, our seats were removed to make way for a TV camera position. But we got there in plenty of time and we were swiftly apologised to by Sail-StadeFrance staff and escorted to the VIP section to watch the game. Nice. I haven’t heard much public opinion on the organisation for this event, but I certainly didn’t see any major problems. The traffic on the way out was amazing – 29 minutes from leaving our seats to getting home to Kenilworth. It regularly takes longer than that to get home from the rugby at Newlands, which is less than a quarter of the distance.

The stadium is looking superb, and despite the breezy conditions outside, was very sheltered within – no problems for the kickers. The pitch looked great and the players certainly seemed to enjoy the day. Even the Boland team, who were beaten 47-13. All in all, it seemed like a great success and who knows if it will help WPRU to do the sensible thing and move from Newlands.

If they do, they’ll need to import some more excitable fans, though.