This was just emailed to me. I’m not sure if it was off some Lancastrian pinterest board or other, but it’s proof that there’s nothing that you can do to properly domesticate people from that side of the Pennines. 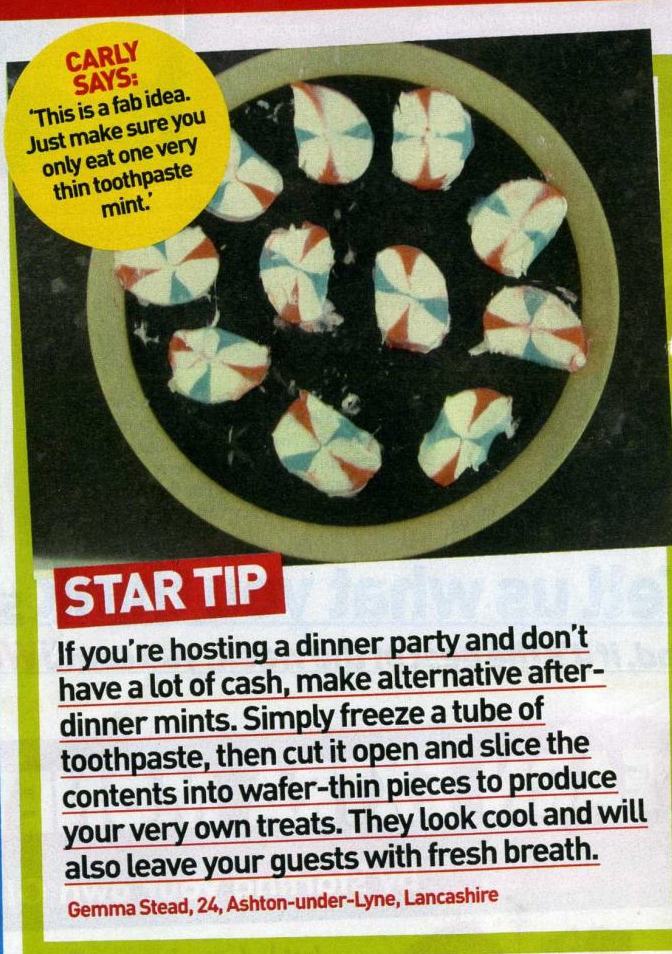 Frankly, I’m amazed that a Lancastrian even knows what a “dinner party” is. But I’m guessing that Gemma is just using a posh term for some people eating tripe together.

To be honest, if I felt that I was so broke that I had to resort to frozen Aquafresh as an alternative to after dinner mints, I’d probably just not invite anyone around. Jesus, can you even imagine how bad the rest of the meal must have been?

“Yes love, we went to Gemma’s ‘ovel. We ‘ad some twigs for starters, tripe fer main course, some lovely muddy water fer afters and then she topped t’evening off with some wonderful frozen toothpaste.”

However if, for some utterly bizarre reason, you think that this is a good idea:

a) Stop reading this blog and get away from me. And everyone else. And,
b) Please remember the dangers of fluoride toxicity and don’t eat too many of these “cool” “tasty treats”.

South Africa isn’t the only country to have potentially economy-changing amounts of shale gas underneath it. The UK has some too. According to the usually politically-left In The Back section of Private Eye magazine:

Cuadrilla, the gas exploration company drilling for shale gas in Lancashire, has announced its discovery of 200 trillion cubic feet of gas – a seriously big find.
If only a tenth of that were to be produced, it would still make it far larger than any gas field discovered in the North Sea, with the added benefit of it being accessible from dry land.
It represents a potential lottery win: not just for Cuadrilla, but for UK plc as a whole.

And here we are talking about 200 trillion cubic feet (tcf) of shale gas.
South Africa’s shale gas deposits are estimated to be at least 450tcf. That’s 450 000 000 000 000 cubic feet of gas. Putting that into some sort of perspective, Mossgas, the successful refinery in the Southern Cape, was built on the assumption that there was just 1 (one) tcf in deposits under the seabed.

Recent shale gas discoveries in the US have already transformed the North American gas market, changing it from a net importer to a net exporter in just two years, and significantly lowering gas prices there. If the Lancashire discovery turns out to be even remotely as big as has been announced, the UK will be in a position to keep its lights on cheaply – and cleanly – for a very long time to come.

The technology for shale gas production is controversial [including] the alleged – but disputed – potential for contamination of groundwater. Again, if the amounts of gas are as large as stated, the highest environmental standards could be imposed on its production and it would still be profitable.

Because abundant shale gas undermines the case for subsidising nuclear and renewable power generation, it faces a well-funded hostile lobby, keen to play up any negatives it can find.
Lurid films of gas-flames shooting out of bath-taps in America have comprehensively been shown to have nothing to do with shale gas production (it is a naturally-ocurring phenomenon in part of the US) but they capture the public imagination.
We can therefore expect largescale anti-shale gas protest from a range of vested “green” interests.

Indeed. I wonder if the British-born Lewis Pugh will take time out from poking his nose into other country’s affairs for long enough to “save” his homeland from an economic boom and cheaper, greener energy like he is trying to do here in South Africa.