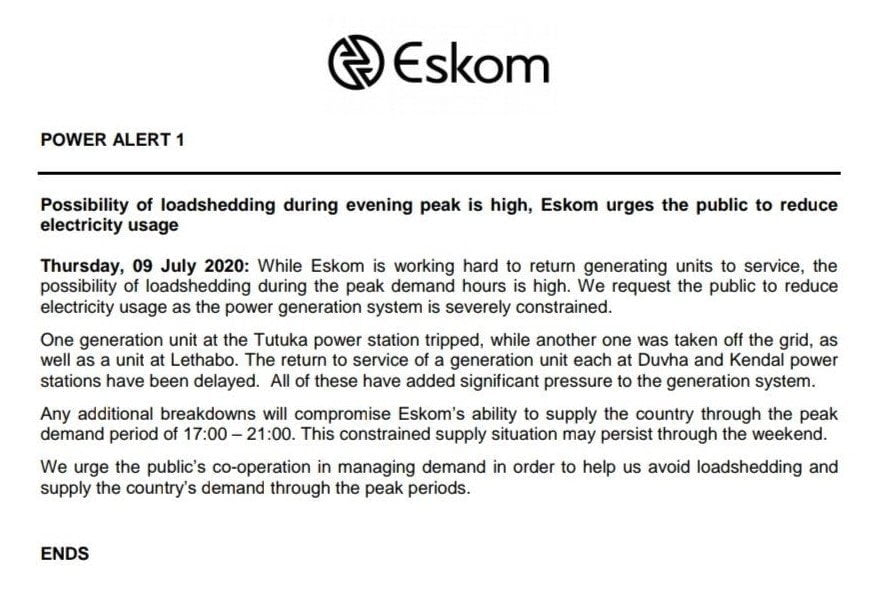 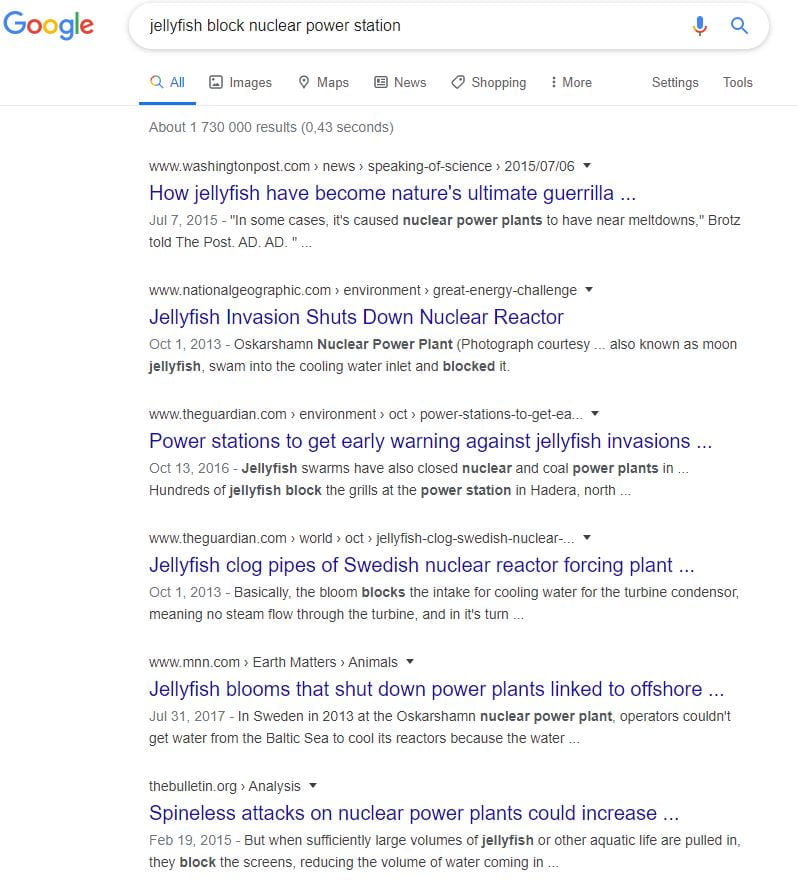 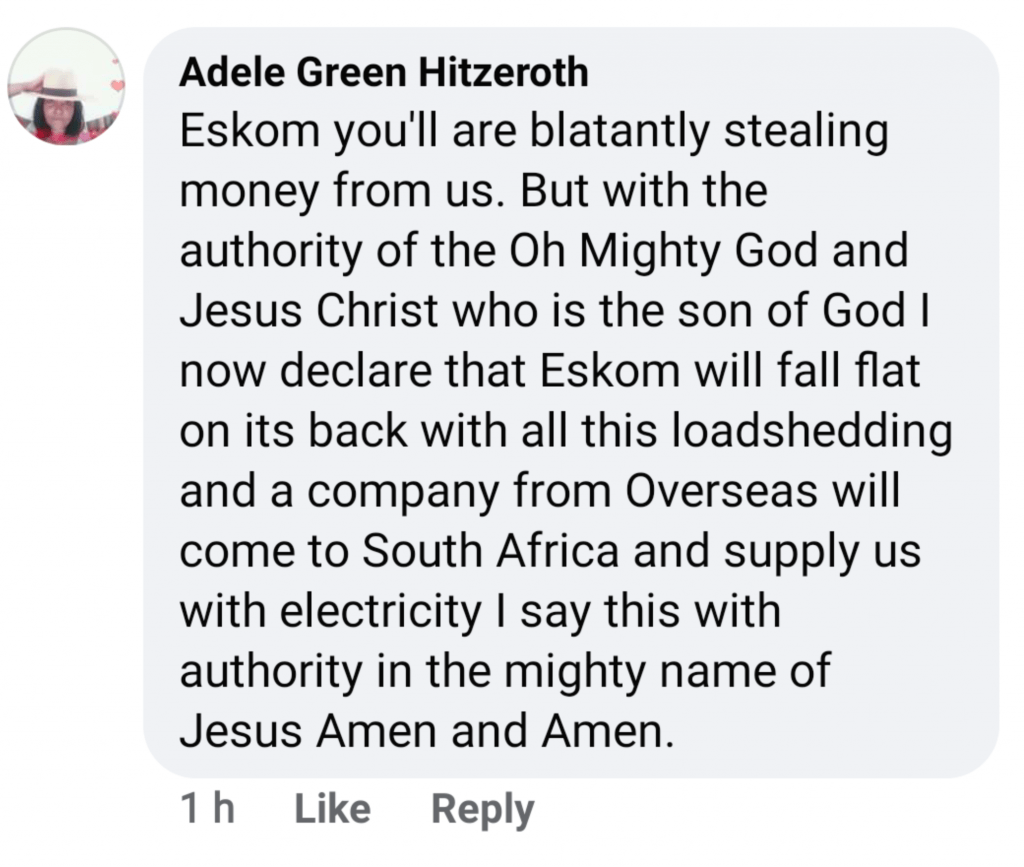 Seriously, who starts writing a blog post 12 minutes before loadshedding is about to start, taking with it computer equipment, connectivity and safety?

I wouldn’t want to work for Eskom’s social media department. It’s a thankless task, constantly relaying bad news to a bloodthirsty audience of rabid, baying hounds, simply waiting to pounce on your every word.

Or to the keyboard warriors of middle-class South Africa, at least.

But you can help yourself out if you’re in that situation. Like by not linking to an article in the Randburg Sun entitled: 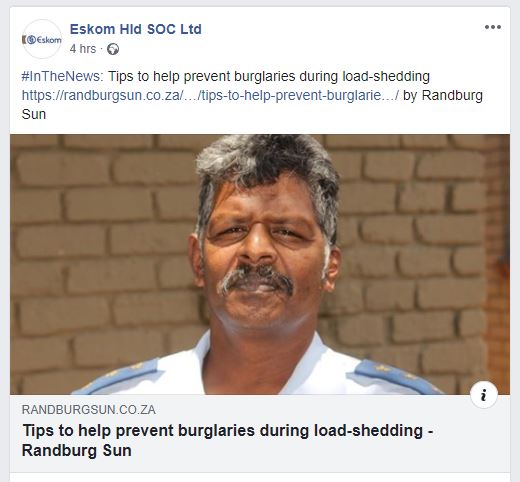 Firstly, this makes people feel (even more) unsafe within their own homes, and secondly, given that Eskom is responsible for the loadshedding, does that not imply some sort of responsibility for the increased crime during loadshedding?
I”m no legal expert, but I think it probably does.

The prosecution rests, your honour. Whenever it gets the chance.

I’m just asking, given that some of the tips include:

Good outside lighting being imperative when there’s no electricity, of course.

If your house alarm goes off or you hear strange noises or your dogs bark, switch on the outside lights, but do not go outside.

Of course, there being loadshedding, those good outside lights will be of no use, but you can flick the switch and hear the click of nothing happening if it makes you feel any better.

Also, because we have a beagle, our dog barking is quite a strange noise, anyway.
Two birds right there.

Ah yes. The lights have just gone out and they won’t be back on for another 2½ hours. It’s the third of these blackouts today and there will be at least another three tomorrow. I’m going to have to post this via my cellphone using the tower in the adjoining neighbourhood – our local one is down, as it always during these times. So now, I need to go and stand in my front garden to get signal.

It’s looking rather dark out there. I’d better go and switch on the outside lights.

It’s been a bit of a crappy day. Sick son, various work stresses, lots of running around, covid panic, loadshedding. Loadshedding times three, in fact. Seven and a half hours without electricity. Let’s not pretend this is anywhere near the First World.

It all seems horribly out of my control right now.

commented someone. And he wasn’t far wrong. That’s also (almost) the opening line to Therapy?’s Stop It You’re Killing Me, which given the ever-rising death toll from the virus, seems spookily appropriate.

I’m sure I’m not the only one feeling rather hopeless at the moment. But knowing that really doesn’t make things any better.

I haven’t personally verified these (but they’re all probably more true than yesterday’s nonsense).

The makers of Corona (beer) have already lost sales of R4.3 billion to the coronavirus.

Not because of the name association, just because China was one of their biggest markets and no-one is going out drinking there anymore.

Visits to Mecca halted because of coronavirus outbreaks.

“Saudi Arabia on Thursday halted travel to the holiest sites in Islam over coronavirus fears just months ahead of the annual Hajj pilgrimage, as the Middle East recorded more than 220 confirmed cases.”

And Friday prayers in Tehran have also been cancelled for the first time since the Islamic Revolution in 1979.

That’s as much as Chile produces in a whole year.

Not least because of the slow down in domestic air travel there.

The Rand has fallen through the floor

Global fears over the coronavirus, jittery markets overseas, emerging markets hit hardest, loadshedding still very much a thing, Moody’s downgrade coming. If you were here for good news about the South African economy (because honestly, where else would you go?), I really can’t help. “Soz.”