Back to back to back gym days and it’s only Tuesday. [crowd gasps]
I’m getting the car serviced tomorrow, so I won’t make it four in a row, but hey, the thought was there. I’ll come home and walk the dog instead. Something a bit more gentle with a side-order of snorfing.

Finally, the excesses of the festive season are falling away, and my knee is beginning to recover from the (still bewilderingly) rock hard sand on Struisbaai beach. I’m starting to put a bit of stress and strain on it – a short run here or a quick row there – and I can still walk.

That said, I’m still giving myself another few weeks before I even consider approaching the health insurance fitness assessment. Let’s at least give me a chance of passing the test and being allowed to live for another year.

Days like tomorrow… er… today were made for relaxing and drinking wine at wine farms, and that is what I fully intend to do. The weather could be better, but you can’t actually have everything and wine, a wine farm and a family will do very nicely in lieu of some sunshine, thank you very much.

Yes, the week (it was actually 6 days) of being good is over and I have lost 1.7kg by just exercising a little more and eating and drinking a little less*. It’s really not that difficult, and if you think you have to buy an overpriced cookbook based on dodgy science and suffer by not enjoying nice things like chips, bread, and chip butties, then you’re sadly mistaken.

Just be a bit better than you were being and then reap the rewards the following Saturday.

Just like what I am doing. Expect photographs… soon.

* The Tall Accountant will agree.

In these days of constant contradiction and heightening hyperbole in the mainstream media, especially when it comes to their reporting on scientific studies, I spotted this voice of sanity shared on Twitter. 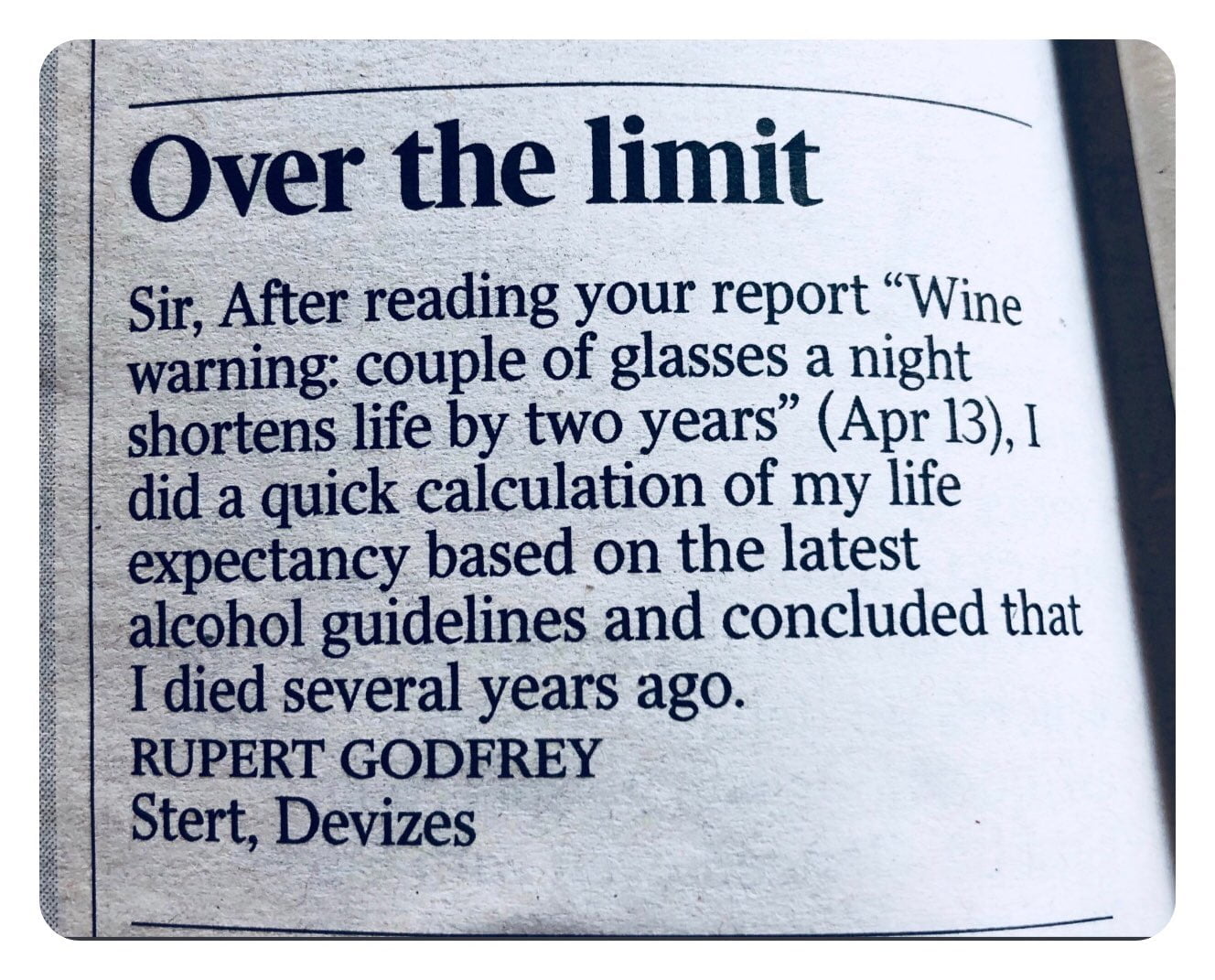 I like this approach. Why not enjoy life while you can, given that we’re all going to kick the bucket eventually?

So, go for it! Drink that wine! Especially if – like Rupert – you’re actually already dead.

Much relief today as a friend and teammate survived a medical close call. But a wake up call, too. Not that I wasn’t beginning to stir anyway. I covered that in part here.

This post dedicated to Nix-Grim, who can (hopefully) now relax for at least a couple of weeks.

As part of the enrollment for this ground-breaking new initiative, I was forced requested to fill in a Personal Health Review which covered everything from Smoking (I don’t), through Drinking (I do) and Stress (I am) to Physical activity (chance would be a fine thing). Prospective answers for each question were given from a drop-down menu, like this example from the stress section:

Suddenly the mass fainting episodes at schools in KZN are explained. This isn’t a case of witchcraft, nor pollution, nor drugs. This is  an example of what happens when you foolishly take the 1-3 times a year option and then use up all your eating on the run opportunities by the first week in February. You go hungry and you faint.

Safer then, to do as I did, risk the wrath of your Medical Aid and tell them you eat on the run most days. Of course, in doing this, I suggest that I lead a high-stress lifestyle which puts me at greater risk of all sorts of nasty disorders and they told me that they’re pretty unhappy with me because of that.
A heated argument ensued over the phone, with Discovery threatening to increase my monthly premiums unless I cut back and only ate on the run 1-3 times a year. In the end, blood pressure sky-high and anxiety levels through the roof after a full-on 20 minute row with the dear Boitshepo in the Johannesburg call centre, I gave in and promised to eat on the run less often.
(She was ever so forceful.)

I put the phone down and had to have 4 beers and slab of chocolate to get over the stress of the whole situation.

* Note that this is different from eating cereal on the run.