We did a lastminute.com and headed down to the Cape Town Stadium for Ajax’s biggest fixture of the season, against Kaizer Chiefs. It was 0-0 until the 88th minute, but at least it was an entertaining 0-0.

And then, up popped Tasreeq Morris:

I think Ajax would have been happy with a draw, so the three points are very welcome indeed.

The crowd was loud, cosmopolitan and generally well behaved. The atmosphere was superb, reminding me that I must go to more Ajax games this season.

And so should you.

So the infamous board tells the players heading out onto the hallowed turf in L4. And we get to experience our own little bit of Liverpool magic as they head out to Cape Town later this month to play Ajax at the stadium. But – according to this piece in the Guardian from the well-respected David Conn, at least – Liverpool FC is letting down the local community in the search of bigger profits.

In the blighted streets around Liverpool’s Anfield stadium, residents are packing up and leaving their family homes, so the football club can have them demolished and expand their Main Stand. In the six months since the club scrapped their decade-long plan to build a new stadium on Stanley Park, and reverted to expanding Anfield instead, Liverpool city council has been seeking to buy these neighbours’ homes, backed by the legal threat of compulsory purchase.

People’s farewells are bitter, filled with anger and heartbreak at the area’s dreadful decline and at the club for deepening the blight by buying up houses since the mid-1990s then leaving them empty. A few residents are refusing to move, holding out against the council, which begins negotiations with low offers. These homeowners believe they should be paid enough not only to buy a new house but to compensate for the years of dereliction, stagnation and decline, and crime, fires, vandalism, even murders which have despoiled the area. Their resentment is compounded by the fact that they are being forced to move so that Liverpool, and their relatively new US owner, Fenway Sports Group, can make more money.

It’s a complex story of urban decay and degeneration over a number of years, none of which can be directly attributed to Liverpool FC, but there is a wealth of good anecdotal evidence suggesting that the onset of the problems in the Anfield area coincided with the club buying up – and then leaving vacant – housing in the local area.
Between the club, the local council’s compulsory purchase orders and the ruination of the area, residents believe that they are not moving out, they are being driven out.

I hope this story, if true, gets a lot of attention. Football fans, me included, focus on stupid non-stories, the various handbags-at-dawn things: the ludicrous moral outrage about Luis Suarez biting someone, or players diving, as though those are anywhere near as bad as a potential leg-breaking tackle. But we too often forget or ignore the real stuff, the venality in the game, the immorality of the people who run it.

Yes. What he said.

Soccer Laduma is reporting that Ajax Cape Town, my choice of local football club could be on the brink of liquidation, despite “being in good financial state”. The reason then? Infighting between the two families who own a 49% stake in the club:

We had an Ajax Cape Town board meeting yesterday which once again proved to be unfruitful. We have failed in all attempts to come to an agreement or settlement with regards to the family’s assets, including the club. We have now called a board meeting of Cape Town Stars (the company that holds the 49% of Ajax Cape Town that the Efstathiou and Comitis families own) on Thursday at 10am. At that meeting we will discuss the future of Ajax Cape Town.”
The crew asked what was meant by ‘the future of Ajax Cape Town’, questioning whether liquidation was an option, to which he replied, “Yes, it is. One of the points of discussion will be the winding up or liquidating of the club.”

While I note that the liquidation is only one possible option, it’s obviously the worst case scenario and therefore the one which Soccer Laduma have seized upon.

I always find it hugely disappointing when grown adults cannot see beyond their differences (petty or otherwise) and actually act in a mature, rational manner, especially when the livelihoods and passions of so many others are involved.
It would be massively disappointing for the fans, the PSL and for Cape Town if this doesn’t get – favourably – sorted out soon. 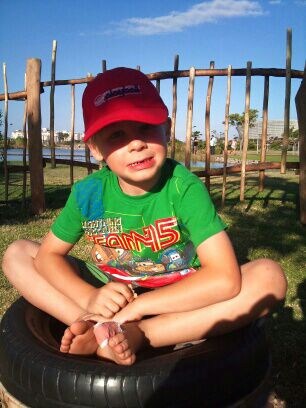 I know that much has been said about the Green Point Urban Park childrens’ play areas by other notable Cape Town blogs, but we hadn’t actually test driven it with the kids until yesterday. Suffice to say that we’ll be going back.

If you’re a parent of young kids and you haven’t been there yet, you’re missing out. We were there between 5:30 and 7pm yesterday evening (it’s open 7am to 7pm) and had to physically tear the kids away from the place. And while there were families around, it was serene and peaceful there yesterday (aside from Alex splitting his toe open and the associated noise), I can only begin to imagine how packed it is going to be during the upcoming holidays *shudder*. Something else which is going to be busy and fun is the Newlands VWS Open Day on Saturday. Now look, I’m telling you about this because it was an amazing experience for my boy last year, but I don’t want you all to turn up, otherwise it’ll just be rubbish. Apart from all the usual fire engines, helicopters and big hoses (careful now), there are snake shows, stall and competitions:

I can highly recommend it.

And then to complete your parenting weekend plans, how about a visit to the magnificent Cape Town Stadium for the Ajax Cape Town vs Bloemfontein Celtic match on Sunday? Gates open at 1pm and kick off is at 3:30pm.

Ajax are once again making this one of their Family Fun Days, with jumping castles, fussball, face-painting and entertainment for everyone. I want you all to turn up (this includes the Ajax strikers), otherwise it’ll just be rubbish.

Add these events to the School PTA Fun Day and a braai from 3pm on Saturday and I’ll be glad to get back to work on Monday for a nice break. (Just kidding boss! hehehehe.)

It didn’t seem that difficult.

And that’s probably why the fans went in to the game so full of optimism. The merchandise store was already selling replica kits with the trophy and “PSL Champions 2010/11” on the back. Dangerous chicken counting.

However, once the game started, you could see the gulf in class between the teams. Ajax were all over Maritzburg like an aggressive moss. But chance after chance after chance went begging. Then, just when I was about to remark that this had all the hallmarks of a 0-1, player of the season Thulani Serero, playing his final game for Ajax before heading overseas, passed to Khama Billiat who danced though the Maritzburg defence and slotted a shot low into the bottom corner.
[thanks It’s Still Ayoba for the correction on this]

At half time, it was all looking ever so good. Pirates were drawing, and who cared what Chiefs were doing, cos Ajax were ahead and fully in control, china.
But nerves crept in, passes went astray and Maritzburg worked their way back into the game. And then came 9 minutes of second half madness. Firstly, with the ever-dependable Hans Vonk being strangely undependable and doing… something… with a backpass that wasn’t a backpass and which he should have just simply picked up.

He didn’t pick it up.

And by the time he tried to kick it out from under his own crossbar, ex-Orlando Pirate Gert Schalkwyk was right on top of him. Goal Maritzburg. 1-1.
But rather than coming out and playing the dynamic, attacking football that put them within reach of the PSL trophy, Ajax continued to sit back. And it was to cost them dearly. A shot, an arm, a penalty. No complaints from the Ajax players and Diyo Sibisi stepped up and scored confidently from 12 yards.

Finally, Ajax remembered what had got them where they were this season and it was all guns blazing for the last 20 minutes of the game. But Bafana Bafana goalkeeper Shu-Aib Walters was virtually unbeatable. And though Sameehg Doutie got the equaliser with 3 minutes to play, it was too little, too late as news was already coming through from Orlando Stadium that Pirates had gone into a 2-1 lead.

At the end of it all, it was the end of it all. The were tears, but there was pride as well. For Ajax to get another opportunity next season will be asking a lot, with their irrepressible manager Foppe de Haan retiring, captain Hans Vonk on his way as well and the mercurial and magical Serero also leaving the club. Half the players made it out to acknowledge the fans – the rest were littered across the pitch and down the tunnel, utterly shattered.

Critics will point to Ajax’s capitulation in April against Mamelodi Sundowns, where they let a 4-1 lead slip and drew 4-4. Others will think that the 4-0 beating they took at Kaizer Chiefs a fortnight ago did for them – and that -4 goal difference did turn out to be critical. Me, I look waaaay back to October 2010 and the world’s dodgiest penalty that cost Ajax a win over Santos.

Had any of these games gone differently, Ajax would be PSL champions this evening.
But then you could say that about today’s game as well.

One final message from those who care in Cape Town, as displayed by my little boy, who was as disappointed by the result as anyone else there today and put on the bravest face he could: All in all, it’s been a pretty rubbish year as far as my football choices are concerned.

Doesn’t mean I won’t be back next season though…