Toggers! Here’s an excuse to blow your own trumpet (if you’ll pardon the expression).

I was uploading some lousy sunset shots onto Flickr when I spotted the Your Best Shot 2015 group being advertised. As you might already have guessed, this is a group into which members are encouraged to upload the ONE shot that they consider the best that they took and uploaded to Flickr in 2015. And as you might also already have guessed, beauty being in the eye of the beholder, there are a range of shots from the extraordinary to the… well… rather ordinary.

Butterflies, beaches, birds and black and white feature prominently, but being such a diverse collection, it’s difficult to pick a favourite.  There are already around 20,000 images submitted (presumably) by around 20,000 individuals, and having gone through the first few pages, nothing has jumped out at me screaming “Ignore any potential copyright restrictions and put me on your blog!” yet.

So here’s one of a lighthouse. 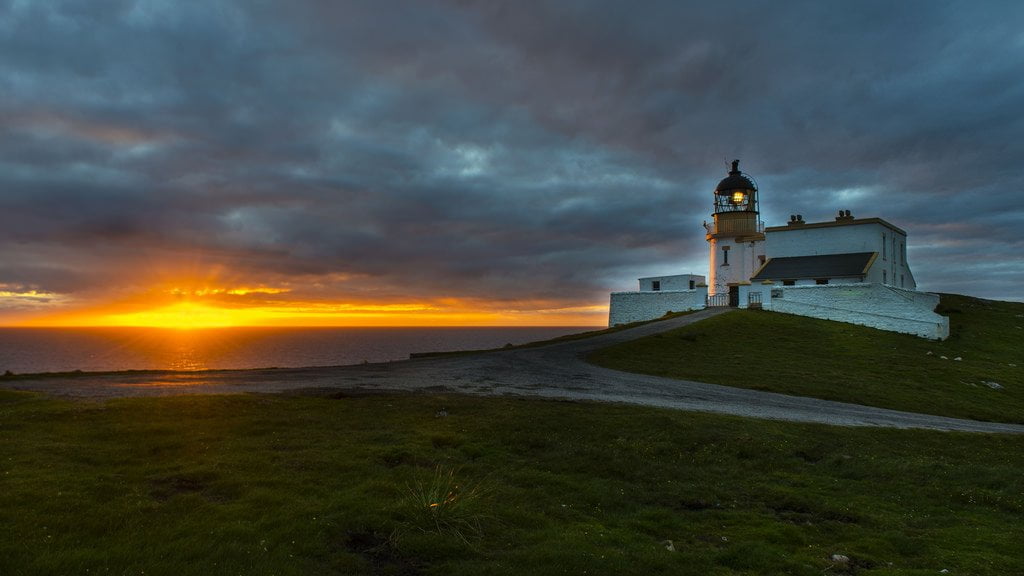 The group is worth a look (click through on the link above) if you have some time. And it’s also got me thinking about which shot I would choose, if I were so asked. If I can be bothered (and I manage to stay awake long enough), I might have a go. (I might not.)
If YOU were choosing your best effort, what would it be?

Southern Scotland is starting to look a little blue in our #GE2015 forecast: http://t.co/FbkC8IWXS0 pic.twitter.com/KhPvlxmltH

and I was intrigued, because Southern Scotland (much like the rest of Scotland) isn’t known for its support of the (blue) Conservative party.
I went to the (rather cool) website to have a closer look, and yes – it seems that in their latest polls, the Tories hold an ever so slender lead over Labour and the SNP in those three constituencies. I don’t actually come close to believing this, by the way. But supposing for a moment that I actually did, how cool are the numbers in Dumfries & Galloway? 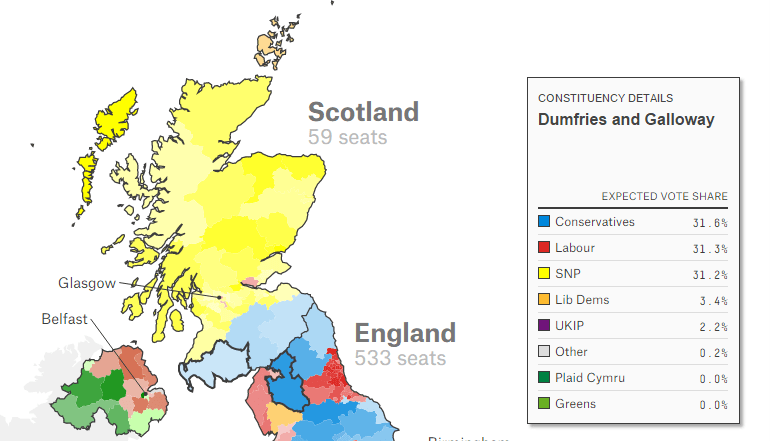 In fact, according to figures from the 2010 results, it would mean that those top three parties are separated by only 200 votes. It would also mean that the Conservative vote has remained completely unchanged while loads of Labour voters moved from Red Ed to Scary Nicola’s Party (SNP). OK, so that latter bit is more believable.

I have limited interest in the UK election, if I’m honest. I do enjoy the websites and the facts and the figures. But it’s all been a bit negative, confrontational and depressing. I’m not voting and unless something amazing happens, it’s probably going to end up in a horrible, horrible mess after the vote, no matter who doesn’t win.

Still, I’m going to have my beagle-eyes on D&G, and I’ll try to remember to update you on exactly how close it turned out to be after the big day.

Yep. Here’s a slide from the Eskom briefing this morning. That legend up at the top reads as follows: 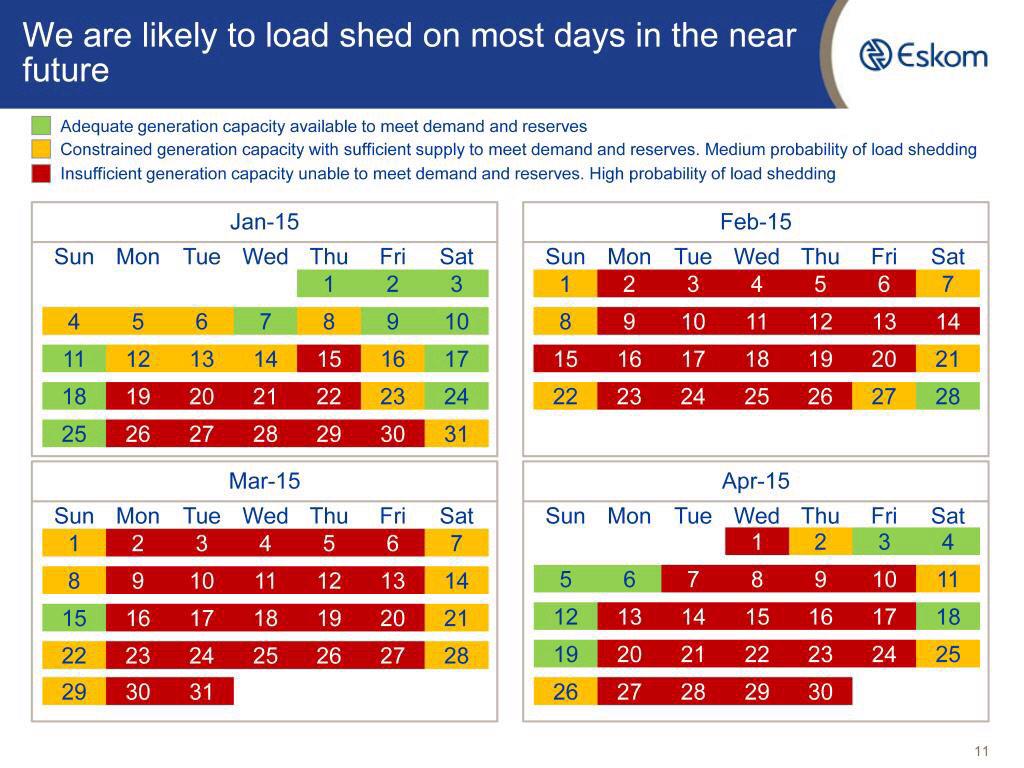 A rudimentary count from next Monday gives us 102 days of which 11 are green, 20 are yellow and 71 are red. That means that until the end of April, SA will have a high probability of loadshedding 70% of the time. Even more worrying for the economy is that there are only three working days which are not red, and none of those three are green.

This is summer, when demand is lower, meaning that in some ways, we’re getting off lightly. But there’s no indication that come May, some magic bullet will have solved everything. No quick fixes here.
So yes, we’re screwed whichever way you look at it. But I think the time for recriminations is done now (I actually think that the time for recriminations was done a long time ago). Spilt milk. This has happened, it’s how it’s dealt with now that matters.
And that doesn’t mean that you shouldn’t try to help out. Switch off what you’re not using, use high-wattage equipment less and try to make some sort of difference.
Do your bit in trying to turn a red into a yellow or a yellow into a green.
It really can’t do any harm.

Just a reminder that you can view the Cape Town schedules here. These are due to change on the 1st February, and we’ll keep you updated when that happens.

A lazy morning on the beach, a light lunch (“I’m going to do tuna rolls; all I need to buy is tuna and rolls”), some late afternoon braai action and then this sunset: 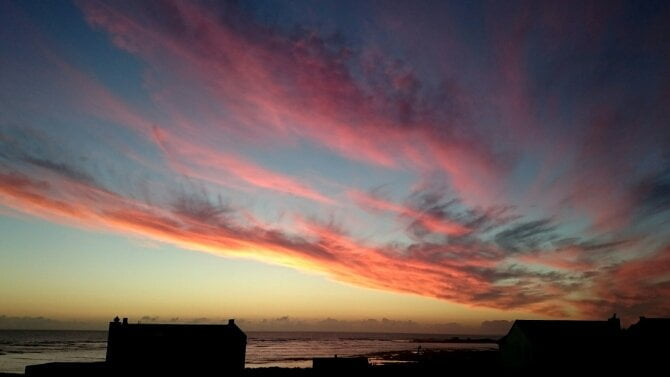 Of course, it’s a marathon, not a sprint: 2015 won’t all be like this, but at least it’s done its best to make a decent start.

I’m thankful for its efforts in that regard.

Look, 2014 had its moments of greatness, but generally, it was pretty rubbish. Really rubbish, actually.
The good news is that, because of that, 2015 will obviously be better.
And even if 2014 was wonderful for you, I hope that next year tops it.

6000.co.za will continue to be here for your entertainment and to throw stuff at when you get frustrated.