Just before we embarked on the 2009 Kids in Tow Tour, we had an evening of very strong northeasterly winds in Cape Town. Those of you from this area will recognise that northeasters are fairly rare and bring with them the heat of sub-Saharan Africa.

Not all of it, obviously. I mean, I am in no way suggesting that the Democratic Republic of Congo drops to Absolute Zero just because it’s a bit breezy in Cape Town. That would be silly. But when it’s blowing at 45km/h at three in the morning and the temperature is still 23°C, then you know that someone, somewhere, is missing that warmth.

The other potential issue for me was that aeroplanes taking off and landing at Cape Town International Airport don’t like those sort of winds. And that was my main concern regarding the gusty conditions – at least until I woke up the next morning and found what it had done to my big tree in the garden. It had broken it. And the big tree, being a big tree, had broken some more stuff underneath itself. Gravity wins again.

Before it was broken, the big tree used to provide a landing spot for Cape Turtle Doves who would gently coo and… coo some more; it gave us that little shady nook at the corner of the pool where you could escape the fierce rays of the Cape Town summer sun. And perhaps most importantly, it hid the rather messy bit at the back of the garden from us.

Now I have a broken garden with a big tree sized hole where the big tree used to be.

But then she stopped and there was silence, because there was no bright side.

We have a broken garden and it’s very sad.

Each and every weekday morning, just before the 8:30 news, 5fm’s breakfast DJ Gareth Cliff plays the “Old School” (should that be “Skool”?) track of the day.
This is the part of the show which is designed to make people of my age feel much older than we actually are, by playing tracks from the mid-00’s, which people of my age consider to be “recent”, and calling them “old”.

Still, some of the stuff he plays is much better than that modern R&B rubbish that’s being released at the moment. Or at least it was, until today when he gave us the 1988 Billy Ocean “classic” Get Outta My Dreams, Get Into My Car.
I was stuck in traffic in Rondebosch at the time (the time he played the song, not 1988) and suddenly became aware of several questioning glances coming my way. Contrary to popular belief, there are not a huge number of places to hide in a car (Mexican immigrants know this) as you are mainly surrounded by glass.
Schoolchildren were laughing and pointing. Elderly pedestrians frowned disapprovingly at the noise.

Fortunately, no-one actually tried to “get into my car” (and who can blame them with that racket going on?). But now, everyone on Campground Road thinks I am a Billy Ocean fan.
Suddenly, life has new meaning to me. It’s been a taxing day in many ways and so we’re heading quota photoward again. Sorry about that.
This one could have been taken in Cape Town today (although it wasn’t): bright and sunny with stunningly clear blue skies, so we chopped down some trees in the garden and burned the wood under some meat.

It’s nice to be back home. Although the trees aren’t hugely happy about the whole return thing.

Not having a braai in the rain: that’s perfectly acceptable. When you need to braai, you need to braai and precipitation shouldn’t change that.
No – I mean having damp braai apparatus. They go rusty, they get that nasty ash-paste in the bottom and they won’t light. Hence the age old expression: You never cry when you have a dry braai.

All of which is why you need a braai cover. 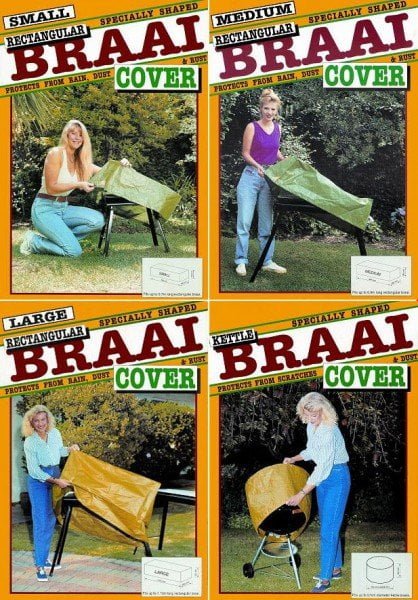 Note that you must buy the correct “specially shaped” cover for your braai. And that the Kettle option doesn’t protect your braai from rain or rust, but does feature the scratch protection option. Perfect.

When looking at “dated” photos from South Africa, it is important to note that one must add about 7 years from the date you think it is if you’re basing your estimate on the UK and about 4 years if you’re comparing with the US. Thus – my first guess was 1984-ish, but that was based on fashion in the UK, so I’m putting this at about 1991 in South Africa.

All of which means that we might have decent broadband by 2016 and a great national football team by 1973.

Pic snapped up from missmoss.co.za – thx!

After a 20 hour trip during which I was impressed with National Express coaches, during which we were repeatedly thrown all over the sky (most especially above Nigeria) and during which the children were mysteriously (but thankfully) well behaved, we find ourselves back in Cape Town, where the Mountain is flat and the people are allegedly rather cliquey.
Not that either of those things bother us particularly, because although the excitement of the holiday is disappearing and although the thought of work looms large on the horizon, we have our own beds in our own rooms; our own sandpit and our own Nanny (where applicable) and I have my own Uitkyk potstill brandy. And although in some ways, I wish we were still over on my beautiful Island, it is good to be back home. Routines can be reinstated, normal life can begin again. And yes, routine and normality have their highs and their lows, but if they didn’t then those times away wouldn’t be so special.
Of course, if when I win the lottery, I will be on holiday all the time and it will still be special, but that’s because I’ll take my own bed with me wherever I go. The benefits and security of home coupled with the enjoyment and novelty of being away. I think I could manage that quite nicely.

Many thanks to all of you who have made the last few weeks so special. You know who you are. Apologies to those of you who we were unable to see. You know who you are too. And you should also be aware that you are top of our list for next time. Whenever that may be. I would say “don’t hold your breath”, but that would be a little pointless, since I’m sure it’ll be longer than a minute or two and you’d get all uncomfortable.

And with that, I am heading off to pray at the temple of El Matresso, the Mayan God of Sleep.

All hail, El Matresso. We are not worthy.