I spotted a nice little rant from Jeffrey Kluger on Time.com on anti-vaxxers.

I hope that writing it was some sort of cathartic experience for Jeffrey, as while it carefully explains all the reasons that anti-vaxxers are foolish, short-sighted and downright wrong, it will have about as much effect as bringing a banana to a gunfight. But I recognise that sometimes you just need to get these things out of your system before the frustration makes your brain go totes cray cray and you start using sloppy internet slang.

Parents who oppose vaccines are not only misinformed, they’re spoiled, having grown up in a world that stands behind the berms built by the scientists and vaccine developers who came before them. If you’ve never seen measles — or polio or whooping cough or mumps — you have the luxury of believing they don’t exist.

Forget the pretty flowers and the Instagrammable sunsets. There’s another side to Nature: viruses, evil bacteria, disease, sickness. Yep, sadly, it turns out that Nature is actually a bit of a bitch. As Jeffrey points out, science (or “messing with nature”) allows us to live longer, it means that we don’t die in childhood, it means that simple infections don’t kill us anymore (for the moment, anyway).
Because those were all things that happened a lot before science happened (see here).
Now, I think that those are good things. Positive things. Fine reasons to embrace and celebrate the progress we have made. Working in science, it’s disappointing when others don’t feel that way, but it’s tragic when their irresponsible decisions impact on the defenceless individuals in our society.

I’m not going to carry on. My rant would have about as much effect as Jeffrey’s and rather than raising my blood pressure by thinking about the idiots, I’d rather be doing my (little) bit to stop quite so many people dying of TB. That said, do click through and have a read of Jeffrey’s column, because it does make very good sense.

Here’s Alex Perry (you may remember him from such articles as “Why Cape Town’s Woodstock Rocks“) in Time Magazine with a scathing piece detailing “How The ANC Lost Its Way“.

To be honest, there’s not a lot of new stuff here for the local audience – we are used to the cut and thrust of the South African political scene around the facts and alleged facts that Perry details. But for the international audience, it must make interesting reading. And two sentences (highlighted in the DTP version of the article) particularly resonate in Perry’s argument.
Firstly, the words of Tumelo Lekooe, a 20 year old street sweeper in Bloemfontein:

I don’t know why we still vote for them.
It’s our grandparents. They say we are here only because of the ANC.

and then Perry’s explanation of the ANC’s continuing electorial success:

With such an underwhelming record in office, how does the ANC win elections?
By invoking its legend.

The DA, our official opposition party, has a  “better” record on service delivery (or at least, its record is better perceived) , but it has yet to make that record – or that perception – count anywhere outside the Western Cape. That’s because it has the dual obstacles of its (again, perceived?) “white” party status and the massive and emotional history and legend of the ANC to overcome.

That said, it’s widely expected that they will overcome those obstacles, prompting these ominous words from journalist Gwynne Dyer:

The election in 2014 will probably be the last in which it can hope to win a parliamentary majority honestly.
The most important crisis in South Africa’s history will occur when it loses the election after that. Only if the ANC then goes meekly into opposition can we conclude that South Africa really is an exception to the rule that liberation movements don’t do democracy.

The ANC announced at the weekend that it has surpassed 1,000,000 members. But as Perry and Dyer both state, it’s the growing number malcontent amongst the ANC voters that will mean that the political landscape may already be very different by the time those 2019 elections come around.

Another sensible article on shale gas, its value in the energy demands of the modern world and the environmental dangers of its extraction? Surely not. 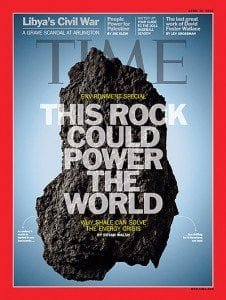 Bryan Walsh gives us a few thousand words on the natural gas boom (poor choice of word, I guess), the need for alternative energy sources, the benefits and the difficulties that it has brought to the communities where drilling is taking place and the the awkward balancing act between powering and protecting our lifestyles.

Along with the Scientific American article I pointed to here, this has to rate as one of the most balanced pieces of reporting I have read on this often hyped and unnecessarily emotive subject.
Walsh takes in both sides and, importantly, doesn’t conclude by coming down on either. After all, that’s not for a journalist to do: that’s the politicians’ decision based on the evidence set down before them.

And, once again, I must stress that I am not fighting for the oil companies here – merely for people to have all the information laid out objectively in front of them before they choose sides in this debate.

“The gas is out there, and it can be accessed,” says Dean Oskvig, president and CEO of Black & Veatch’s energy business. “But we do need to solve the environmental issues surrounding that extraction.”

If that can be done right, shale gas really could change the way we use energy for the better. But even if it does, the industry will still fundamentally remake parts of the U.S., and of the world, in ways we won’t always like. But that’s the price of extreme energy, and it’s one we’ll continue to pay until we can curb our hunger for fossil fuels or find a cheap, reliable and clean alternative to them.

Opponents of fracking will pay heed to the 1,218 violations issued the Pennsylvanian Department of Environment “for offences ranging from littering to spills on oil sites” last year, but what this article emphasised to me was that fracking is as safe as any other industrial process if it is done properly. The vast majority of issues around pollution stem not from wells exploding or aquifers being polluted (a “huge concern” for the Karoo groups, but as Walsh mentions, there are actually no proven instances of the latter), but from the mismanagement of waste water. That such a simple part of such a complex process can be the cause of so many problems is inexcusable, but it should also be easy to remedy.

Walsh also compares the localised pollution from fracking with the more generalised pollution of coal-powered electricity generation: a methodology which is especially relevant while the problems at Japan’s Fukushima-Daiichi nuclear plant continue.

The economic benefits are also taken into account – from both sides. Obviously, while there is profit for the comapnies doing the drilling (otherwise they wouldn’t be doing it, durr) there have been both positive and negative economic effects on local communities:

“I think it’s been a good thing overall,” says John Sullivan, a commissioner for Bradford County. “But I just wish we could keep the economic benefit and minimize everything else.”

As Walsh says: “Good luck with that”.

Sullivan’s pipe dream is an ironic parallel to those who feel that we can produce enough energy through renewable sources such as wind and solar to bypass the need for fracking – either here in SA or anywhere else in the world. Yes, of course, I agree that that would be the ideal solution, but it really isn’t possible given the demands of our society. And yes, of course, I agree that it would be ideal if we could radically alter those demands, but as Eskom’s call for saving electricity back in 2008 proves, you’re smoking your socks (an environmentally damaging activity, incidentally) if you think that’s going to happen, as well.

Anyway – despite Time’s horrible habits of linking to other articles in big red letters every two lines, putting adverts everywhere and breaking it up into five pages – this is an informative article which weighs up both sides of the fracking debate and is well worth a read, either as a first introduction to the subject or for those seeking more facts and figures and further questions posed by our need for alternative energy sources.