We begin with a quote…

It is not a pleasant behaviour to observe, as the seals completely freak out and make a lot of noise.

So says Austin Gallagher, a postdoctoral researcher at Carleton University in Ottawa, Canada. As if it would be pleasant behaviour to observe were the seals all cool about it.

Well, it is the story about the Kelp Gulls pecking out the baby seals’ eyes and then eating the blinded corpses. (Come now, we’ve all done it…)
Suddenly, what that American tooth bloke did to Cecil the lion seems almost… well… humane.

Life for a Cape fur seal pup is pretty tough to begin with.
For one, the babies can’t swim and have to rely on their mother’s milk.

To be honest this is pretty much the same with human babies.

To supply that milk, the mother seals must occasionally go hunt fish, leaving the pups alone at the colony for several days.

Yeah? Well, new mum Sharon might go down to her local pub and then call in the kebab shop on the way back to the flat.

The unprotected pups might then fall prey to land predators such as lions and hyenas—and now, seagulls.

OK. I’ll admit that this is less likely to occur in a human, urban environment.

In the study, kelp gulls were successful in plucking out eyeballs in roughly 50 percent of observed attacks.

“A blind seal cannot forage, cannot find mom, and will get attacked by other gulls,” says Gallagher.

Nice. And from there, obviously, it’s game over.

I’m not saying the killing animals is right. Not for one minute. (Unless you’re making tasty burgers or ribs or something and then it’s totes fine.) But when Cecil gets a million column inches; when Rhinos get a billion hashtags – why is no-one going after the damn Kelp Gulls and their disgusting torture of these innocent little baby fur seals.

I’ll tell you where: Nowhere, because seagulls make difficult targets for their daft campaigns when compared with the poor Faroese fishermen and the wholly landlocked Johannesburg base of the South African Department of Energy.

It’s pure, seagull-favouring hypocrisy, and I, for one, am sick of it.

Because I’ve been busy with many other things, and South Africa has been busy with talking about e-tolls, I haven’t got round to blogging until now. And even now, I don’t have a huge amount of time to blog.

So have a nice video:

Just off the north coast of Cornwall, I’m filming a swarm of blue jellyfish when a grey seal comes to play. The water’s clear and calm so neither of us are as worried as we would usually be. He seems quite playful but not threatening in any way, just mouthing at my fins a bit. As I stroked him he put his fin around my arm (29 seconds in) and held on while he investigated my mask (or admired his reflection maybe!)

It’s nice that people in the UK can enjoy this sort of interaction with their local seals (although teeth! at 1:03). Here in SA, they seem mainly to try to kill them with bullets and plastic.

On the drive through to the Waterfront today, we stopped off near the Twelve Apostles Hotel to watch some real seals diving off the rocks near Oudekraal.
Later, we bumped into their stuffed cousins in the Aquarium shop: 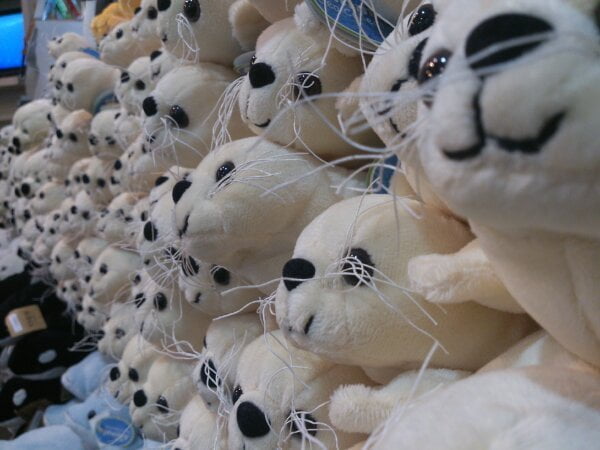 And at R150 per seal, that’s a whole lot of otarine capital, right there.