I’m still messing around with (literally) about 1000 photos that I’ve taken over the past two or three weeks – you’ll get to see them in due course. In the meantime, here’s one of the lighthouse at Cape Agulhas that it has been suggested might make a nice desktop background. If you want it as yours, please feel free, by downloading the original here (handily in 16:9 format).
And – assuming I remember – I’ll try to prevent any staleness and stagnation by giving you something new to look at behind your each and every month.

One of a great many photos that I took at Boulders Beach this morning, more of which I will upload tomorrow morning as there is a rugby and curry evening starting 4 minutes ago and we’re hosting. Oops. This is the Roman Rock Lighthouse, just outside Simonstown Harbour, thus satisfying my lighthouse fetish. And, in the foreground, some of the famous Boulders on the beach, which was actually surprisingly devoid of penguins  – apart from the odd one every now again stumbling onto the sand after being pushed down the path by TMNP employees desperate to keep the tourists happy.

As I said, more photos tomorrow. But now: some Tri-Nations and a quart of Castle Milk Stout. As you do.

Does exactly what it says in the title. 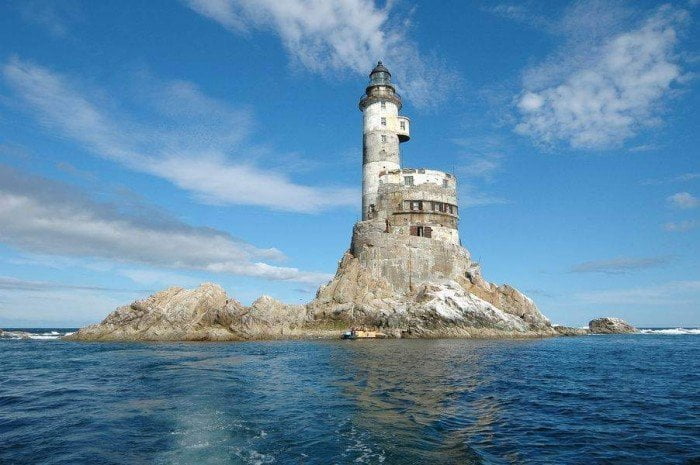 …the Communist Party of the Soviet Union decided to build a chain of lighthouses to guide ships finding their way in the dark polar night across uninhabited shores of the Soviet Russian Empire. So it has been done and a series of such lighthouses has been erected. They had to be fully autonomous, because they were situated hundreds and hundreds miles aways from any populated areas. After reviewing different ideas on how to make them work for a years without service and any external power supply, Soviet engineers decided to implement atomic energy to power up those structures. So, special lightweight small atomic reactors were produced in limited series to be delivered to the Polar Circle lands and to be installed on the lighthouses.

Some great photos and handy hints for rogue states and terrorist groups on where to find unguarded plutonium.

Well, not to a lot of people as our future President anymore, since fraud and corruption charges were re-instated against him yesterday, following the National Prosecuting Authority’s successful appeal against Zuma’s previous appeal to get the charges against him dropped was overturned.

It’s pure comedy, isn’t it? And add to that the improbable names of Zuma’s lawyer, Kemp J Kemp, and the NPA’s spokesman Tlali Tlali (which isn’t pronounced like you think it should be) and it gets even sillier.

Many, including FF+ leader Pieter Mulder, are now calling for charges against Zuma to be dropped and some sort of “agreement” to be reached. (I wonder where he got that idea from?)
One only has to look at the effect yesterday’s judgment had on the exchange rates to see that this case has much wider-reaching implications than the freedom (or otherwise) of our dear Msholozi. It’s harming the country and something needs to be done to halt the damage before it’s too late.
For many people, the ideal solution would be JZ stepping down as the ANC leader and presidential candidate before the election in Autumn. That’s not going to happen though. Too many people stand to gain too much to allow something as trivial as fraud and corruption charges and the wreckage of what was once South Africa’s shining reputation to get in the way.

And so, it comes down to a settlement to allow the charges to be waylaid or put aside or dropped or something. Safety first. It’s a wholly unsatisfactory way of doing things, yes, but it might just save the country. Or it might not. Thank goodness I don’t have to make these sort of decisions and have people like Julius Malema to do it for me.

In other more important news, that statue mystery turned out to be some artist wanting to “mix art and nature”. Boring.

Although I will in future follow the correct procedure and obtain permission from the relevant organisations, I will continue to place sculptures in different locations in South Africa and abroad to raise awareness and provoke debate.

Yeah – whatever. Now go and get a proper job.

And, in a poke in the eye for Victorian maritime engineering, Port St Mary lighthouse has been washed away by a big wave.

A combination of a high tide and strong winds over night dealt a fatal blow to the 19th Century light that has been there since the breakwater was built, between 1882 and 1886.

I could sit here by the fireside and relate a myriad of tales from my childhood, many of which would be about that lighthouse. But that would be rather dull for you and a lot of them would be made up anyway. So I won’t.