This is very disappointing from Jesus and his Disciples. Offered up to us throughout our childhoods as a shining example of how to lead our lives, I’ve just been sent this image of Him and His friends out and about last night, and quite frankly, I’m shocked.

Let me just say that I’m not impressed with the idea of celebrities not being able to lead their private lives privately, either. I wouldn’t usually use a paparazzi shot like this on the blog.

But this has got me mad. 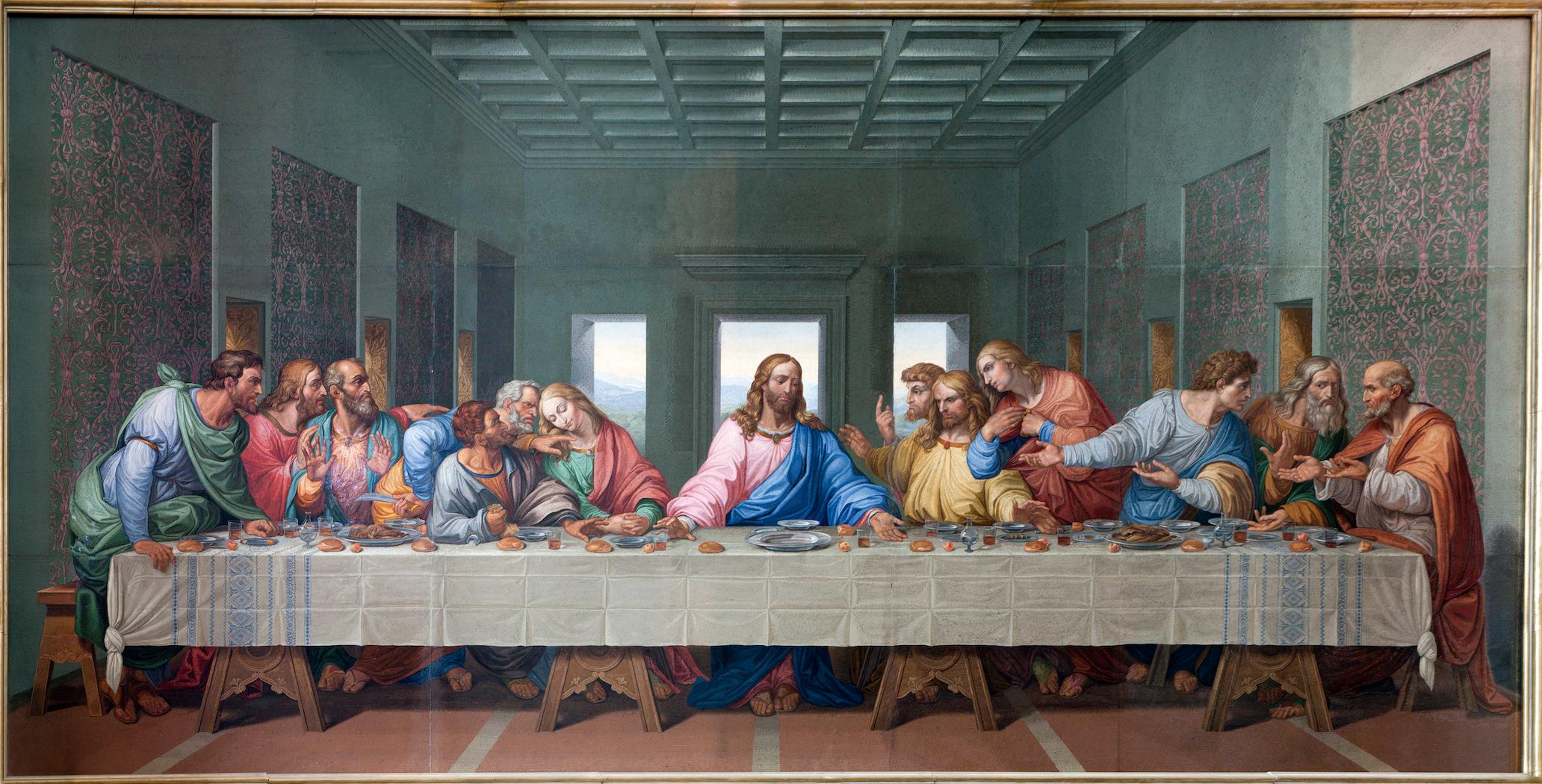 Zero social distancing. And not a mask in sight.

I’ll bet that they didn’t even sign in with their contact details for Track and Trace in case someone ends up with the bad Covid. Which they will, because, I mean, just look at the state of this.

And while the restaurant owner needs to step up and take some responsibility – why not space them out over both sides of the table for starters (and the other courses)?? – this really comes down squarely on the shoulders of the guys at the table. I’m willing to bet that alcohol was involved here: they’ve clearly all been on the water and have forgotten about the rules and regulations put in place to protect us all.

And are those Jägerbombs on the table? That’s illegal.

Look, it’s all very well dying for the sins of mankind, but when stuff about your private life like this comes out, it really devalues the whole message. Very poor.

Get it together, for Christ’s sake.

Another address from the President at short notice yesterday evening and it’s all change again for the rules and regulations of Level 3 Lockdown. Or Level 3 Enhanced or Advanced or Plus or Plus Plus (which makes everything better). I’m a bit lost as to exactly where we are now.

I think we’re all a bit lost as to exactly where we are now.

What changed last night, then?

Masks became mandatory in public places. There are now a lot more rules and detail about that, replacing the previous:

Which did kind of suggest that masks were mandatory when in public places.
Good. There’s plenty of evidence that this will slow the spread of the virus – especially in indoor space (which aren’t good places to be anyway right now, remember?)

The sale of alcohol got banned again. Annoying, disruptive, damaging to the local economy, but sadly understandable, given the current pressure on our healthcare systems. And yes, it does feel like the whole class is being punished because a couple of kids wouldn’t stop talking, but that’s the way it goes sometimes. Trying to put those two children on the naughty step has not worked, so we all have to suffer. Once again, the black market will open up, shebeens won’t be adequately policed and the law will instead choose to crack down on someone with a six-pack of Savannah in his car boot. It’s all part of the dysfunctional society in which we live.

A new curfew 2100-0400. It seems like that those two kids who ignored the teacher and kept chatting also do it mainly at night. Alcohol and late nights are apparently the thing and time that there is most pressure on hospitals – at least from a unnecessary admissions point of view. So – no more booze and no more late nights. Not that the rest of the class were out and about much anyway.

Taxis can now have 100% occupancy for short distance trips. As long as their passengers wear masks (as above) and as long as the taxis have their windows open.

Eish… Taxis… taxis… taxis… The transport lifeline of low income South Africans.
The bane of every other road users’ life.
Let me take you through the folly of these regulations in no particular order.

100% occupancy. This in the same week that it was revealed that having middle seats empty on planes halved the risk of catching coronavirus. 100% occupancy in taxis will only increase the chance of passengers catching Covid-19 on their taxi journey. However: honestly, given the infamous disregard for the law amongst SA taxi drivers, it’s unlikely that they were sticking to the previous 70% rule anyway.
Opening windows. I can be pretty sure that the windows on taxis will not be opened during journeys in winter. It’s either freezing cold, soaking wet or (and yes, actually at the moment) both. Opening the windows may seem like a silly thing, but ventilation is key in preventing the spread of respiratory illness. It’s one simple way of reducing the spread of TB. However: honestly, given the lack of anyone opening taxi windows to “Stop TB” and yes, given the infamous disregard for the law amongst SA taxi drivers, it’s unlikely that any windows will be opened.
Wearing masks. This one is down to the passengers, because they sit behind the driver and once they are on board, s/he can’t see them. Given the adherence to the mask rules so far, and adding that there is no apparent punishment for the passenger – only for the driver, I can’t see this one working out either.

So, while fully understanding the importance of the minibus taxi industry for many South Africans, taxi use will merely lead to more infections and provide an excellent vector for the virus to spread further, both due to the very nature of the rules, and the fact that any mitigating regulations are likely to be ignored.

We can still go to church, to cinemas and the theatre, but only if there are fewer than 50 of us there. We can pop in to the casino or restaurant, as long as they make sure it’s not more than 50% full. But we can’t go and see our families in their homes. I don’t agree with half of this. Probably not the half you think though.
Let me explain it from a couple of places.

I have mentioned before that just because something is permitted, it doesn’t mean that it’s a good idea. And being inside with other people is not a good idea at the moment.

It’s almost as if that first line of the lockdown regulations:

You must remain at home at all times…

was put there for a good reason.

I would strongly advise against going to cinemas, theatres, casinos and restaurants right now. But at least if you do (and assuming that they are following regulations, which many/most seem to be), you will be screened on entry and have your details recorded, so 1. things are controlled and infection risk is reduced, and 2. if there is a problem, they can get back in touch with you and tell you that you may have been exposed.
I wouldn’t be visiting family and friends (especially older family and friends) even if it were allowed right now. Really, infecting relatives because the little asymptomatic transmission fairy was hitching a ride on your shoulder is not a good look.
Let’s be honest, many people have been going round to see their families and visit friends, been meeting in groups to exercise, and generally ignoring regulations since lockdown began. And who of them is going to then obey the rules about not going out if you are feeling under the weather?
And there are no screening precautions in place at Ouma and Oupa’s place.

There are far too many stories about people getting sick because they have done silly things.

So don’t go out if you can possibly avoid it: and you really can avoid cinemas, theatres, casinos, restaurants and Aunt Mary’s. You can.

So in conclusion, once again, if you take a step back and look through neutral-coloured spectacles, the government is trying to balance the dangers of the virus and the dangers of a collapsing economy. And they are trying to follow best practice as far as limiting potential exposure and protecting people – in words at least.
Are they doing it very well? Not really.

They’re in a no win situation. And they’re not winning.

Will people continue to break the rules as and when they see fit? Damn straight.
Will any of this be adequately, fairly and correctly policed? Nope.
Will we see the black market rise again for booze and continue for cigarettes? Of course.

This is not a pretty picture. But then global pandemics rarely seem to paint those.