Father’s Day, and after some lovely gifts and a nice coffee in bed, I was lucky enough to be taken out (not in a Mafia way, no) for a picnic brunch at Kirstenbosch.

A few things that are relevant or of interest at this point:

It’s midwinter’s day tomorrow, but today is 28 degrees with a strong, gusting gale force, Bergwind blowing. (You’ll note that that link is illustrated with a photo from Kirstenbosch, almost as proof that it can happen there. Because it does.) It’s hot, dry and very breezy. Not bad for June, great to be out and about, but not great for watching the birds, as their perches were waving about all over the place and the feathery things themselves were very skittish.
Kirstenbosch was empty. Like, park right outside the gate empty. On a sunny Sunday morning (and Father’s Day, nogal) at 10am.
Why is this? Where is everybody? I don’t understand. Still: fantastic for social distancing.
Also, Kirstenbosch needs a bit of TLC. I’ve never had to say that before. Yes, of course it’s still utterly magnificent, but the lawns need a mow and the beds need weeding. Basic stuff that makes a lot of difference to the general appearance and the overall impression. I don’t know if this is a money thing or a Covid thing or a environmental decision, but it looks a bit tatty at the moment.

Anyway, after a very pleasant brunch and an international Zoom call to partially fulfill my own filial duties, I tried to find a few more sheltered places to get some quick shots. The pincushions were bright and cheerful, and the sunbirds were out and about. It was frustrating stuff with the birds flitting at the slightest movement and the flowers being buffeted by the wind from all angles, but I did manage to get a few decent images. You can see them on Flickr here.

I feel that in better conditions, I could have done better, and so I’m determined to pop back “soon” (it is just up the road and we are BotSoc members, after all) and see if I can improve on what I got today.

So… look out for that then, I guess.

Not the one in… [checks Google Maps]… Port Elizabeth. No, a square protea, taken a couple of days ago on a visit to Kirstenbosch National Botanical Gardens. 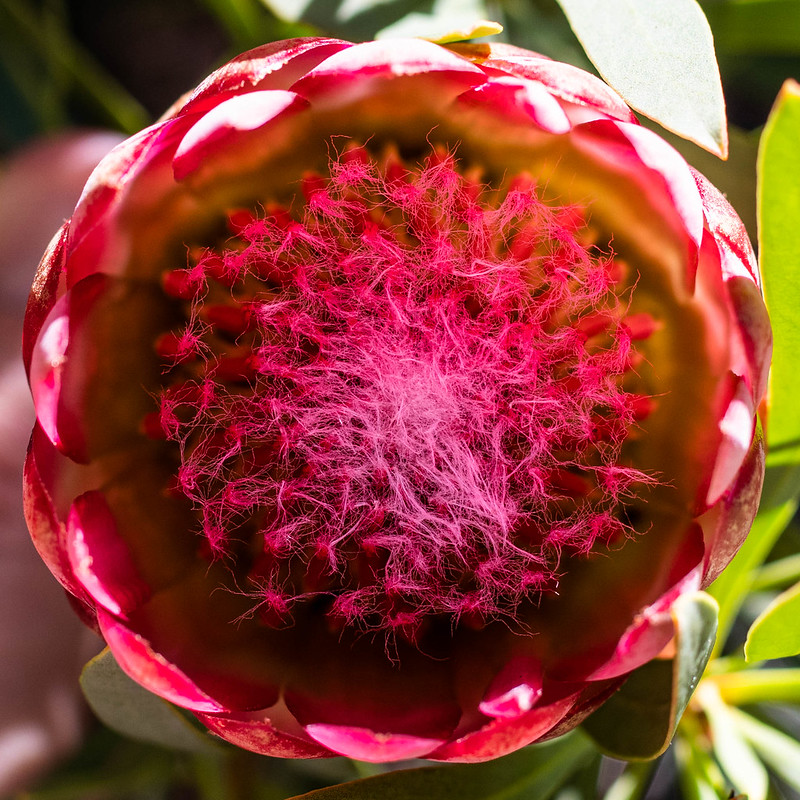 Biological near symmetry and perfection.

I also have a weird panorama from the trip that went horribly wrong in processing but came out “interesting”. I might share that another time though.

A lovely morning out in the local utopia that is Kirstenbosch Botanical Garden yesterday yielded some (or more) photographs. I’ve got several plans for today not of which involve editing, but here’s one of my favourites in a likely (and understandably) vain attempt to keep your attention: 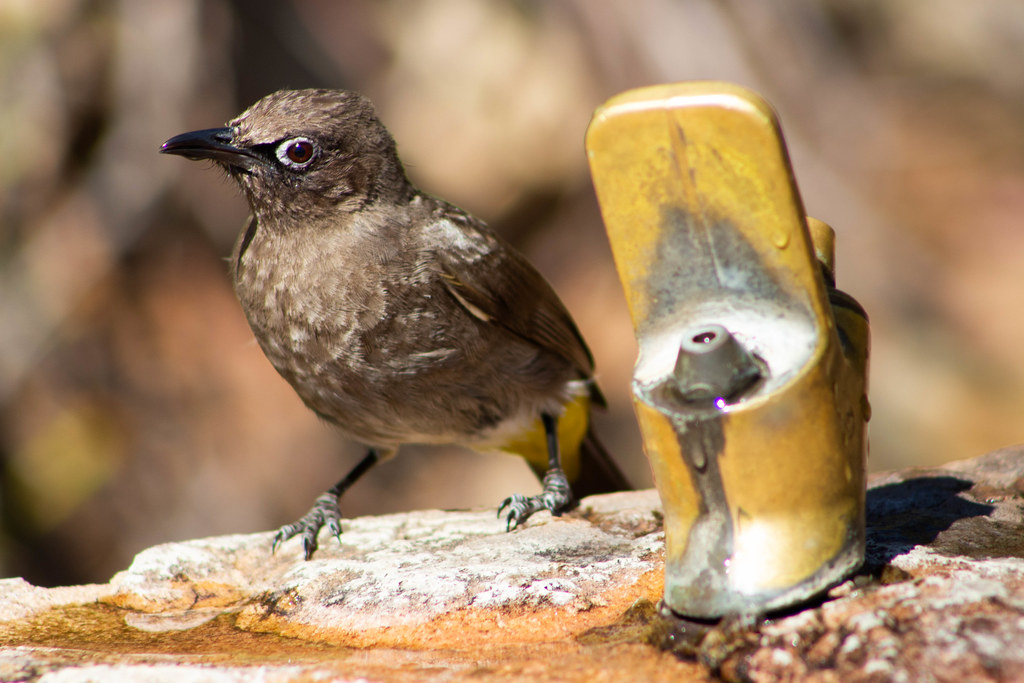 That’s a Cape Bulbul (Pycnonotus capensis) enjoying a quick visit to a (human) drinking fountain on what was a very hot day.

More pics on Flickr when I get around to it.

On the way to the lab this morning, I spotted a poster for a horticultural event which is coming up this weekend, based specifically around a single sort of plant. 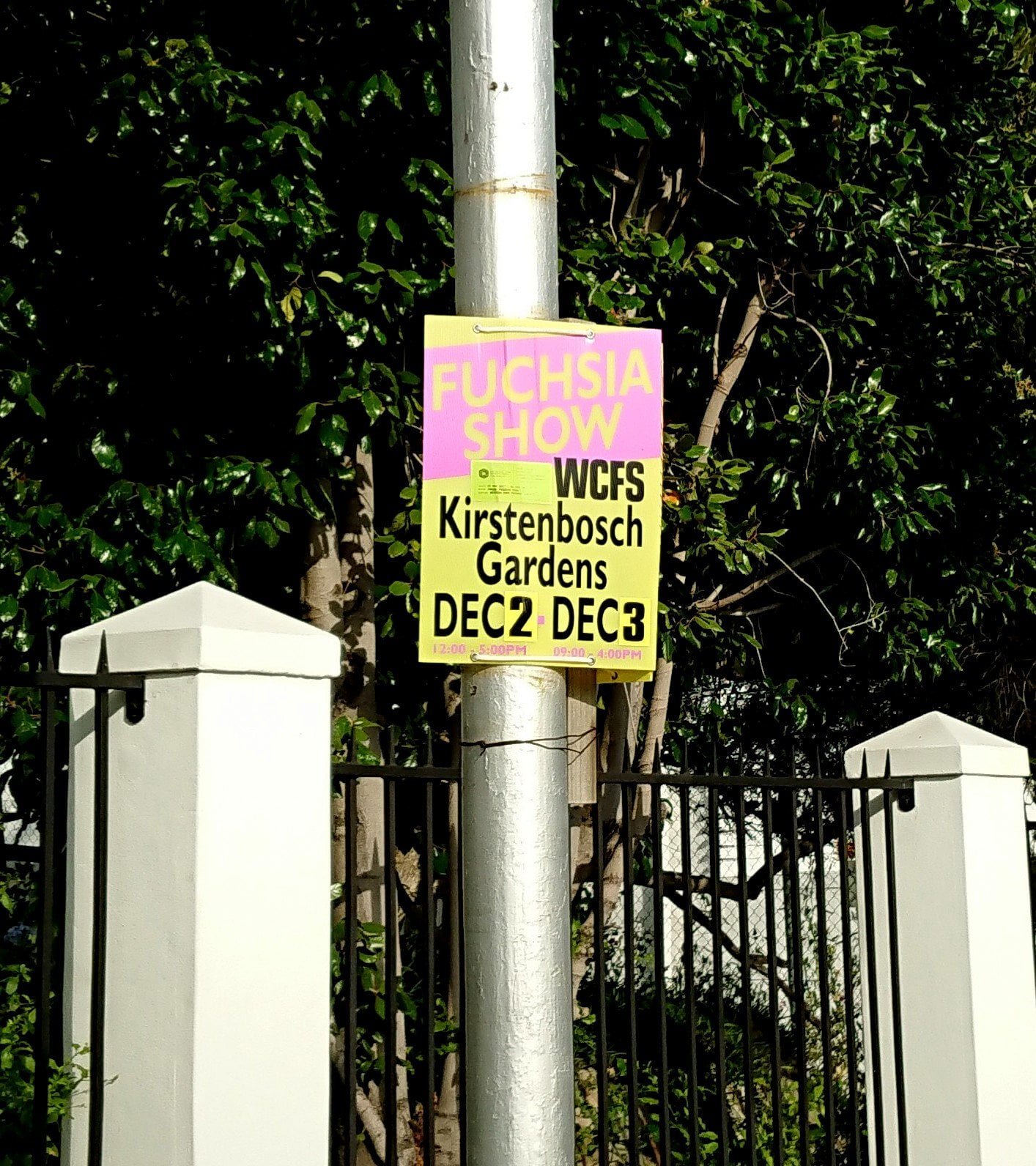 So yes, there’s not long to go now before this show is due to happen.
I suppose that you could say that it’s coming up in the very near fuchsia.

All is going well Chez 6000. Mrs 6000 may be overseas, but we are perfectly capable of looking after ourselves and while she’s living the grand life, we’re going to have some fun too. This was going to be achieved by going on a trip to Kirstenbosch and having a go on the new treetop canopy walk – the Boomslang – until the older half of the children got invited out to the cinema.
Then, of course, the younger half of the children wanted to go to the cinema too. That was until it was pointed out to her that she could be the first of the family to go on the Boomslang. The younger half of the children is six and when you are six, being the first to do something is a Big Thing. The cinema was soon forgotten and suddenly every second word was Boomslang. I’ll be honest here, the pronunciation may have been a little iffy on each of those occasions.

Heading in to the bottom gate at Kirstenbosch leaves you quite a climb up to the walkway – you have to traverse the concert lawn, which is much emptier, but somehow also much steeper when there aren’t thousands of people sitting on it. And then, tucked away at the right hand side of the path, there it was: a rather unassuming entry onto the Boomslang. 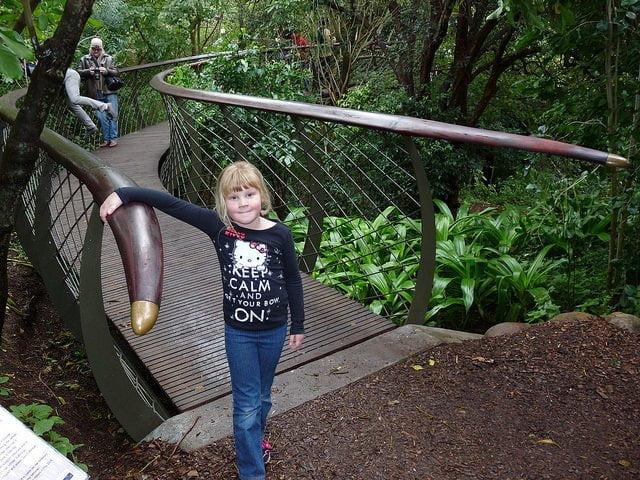 First on. (Not sure what the guy in the background is doing)

I wasn’t sure what to expect. I’d heard mixed reports from “spectacular” to “underwhelming”, so I guess I went in with an open mind. I was quite impressed though. It wasn’t too busy and while the views weren’t as good as they could have been (because of the weather), the way that the gardens open out beneath you is quite something. The name (meaning tree snake in Afrikaans for our forrun readership) is apt, as it does wind through the canopy like its namesake. It also moves. Quite a lot. Not up and down, but side to side. It’s difficult to say how much, but I’d guess at a few inches at most. Still, it’s an interesting sensation.

And, because I’ve already been asked twice, did we feel safe? Yes, completely. You’d have to work very hard (and be very foolish) to fall off it.

So, would I go to Kirstenbosch just to go on the Boomslang? No, I wouldn’t. As a standalone attraction, it’s just not “wow” enough to go just for that.
But it’s something I’m sure that I’ll do each time I visit and I think it’s a great addition to the gardens.

Some few photos here, tacked onto the end of the Aquarium tour we did on Saturday.