I am SOOOOO ready to get back to playing football again. Tuesday nights are a bit of a nightmare Chez 6000, so while I’m not playing, I’m doing my level best to help out with taking kids to various places. That way, when I can play once again, and I can’t take kids to places, we can at least look back over the year and note that I did take some of the kids to some places at least some of the time.

The only thing holding me back now is this bloody calf, which sadly, I do need to chat to a Physio about. Medical expenses can like to be absolutely ridiculous this year. Not quite one hour at the cardiologist cost over R4000, but as was pointed out, that’s a tiny fraction of what an actual cardio incident might cost, and that’s a reassuring way to look at it.

The calf is a weird one. I can do everything except run. I can walk up huge hills at 6kph. I can walk for 10km around the neighbourhood. I can use a stepping machine. I can do a cardio session. No issue.
But 20 seconds into a gentle jog (ok, it was a bit longer here, but…) and we’re back to square one. And downhills are worse than uphills, which makes me wonder if the calf actually knows what it’s doing.

I read this article which told me I was getting old, but did have an interesting link to L5/S1 lower back trouble (which I’ve had since I was 16) in elite athletes (which I’ve been all my life). Just weird that it’s never manifested itself in my calf until now, but I guess that’s where the age bit comes in. If “the science” is to be believed, that is. [rolleyes emoji]

Because like I say, everything else is ready to go: I haven’t been this fit since… well… just before I got Covid. Whether I can ever get back to that level, I don’t know, but there’s no harm in trying and hoping.

So I’m very ready to get this one little thing mended now and get going again.

The calf has been tested by walking a lot. And that includes Forest Drive (the posh one in Bishopscourt, not the crappy one in Pinelands) which is 100m of going upwards in 650m of going forwards (mainly upwards and forwards).

But still taking things slowly because I’m older and wiser than I used to be.

And then I jogged down Oak Avenue (the one with the dead cat) and just as I got to the bottom there was a twangy poppy snappy ping and some pretty nasty pain from my left leg, and now I had a couple of kilometres and the best part of 100m to climb before I was home – with a mashed calf.

And so ice packs and drugs have been the order for the afternoon (plus some Deep Heat, because who doesn’t want to smell like a Frenchman’s groin?).

I think I need to chat to my physio next week.

I hurt my back at the end of November and – because I’m old now – it’s taken a long time to get right. As a measure of just how long, I don’t think it’s quite there yet. But nearly.

Still, with that as a reason, and my Dad’s visit as a handy excuse, I’ve managed to avoid most forms of strenuous exercise for almost 8 weeks now. Add to that all the calamari, beer and burgers I’ve been enjoying during his stay, and well… there’s some work to do.

This morning (with my Dad still only over Algeria), I went for a slow, hot run. The speed was simply because I couldn’t go any faster, the heat was because it was a hot day.

It didn’t break any records, save for perhaps being the most overdue run in recent history. The back seems to have held up and there have been no immediate after-effects save for quite a lot of tiredness.

Watch this space for more updates as the weight comes off and the fitness increases. Or not, if I decide not to exercise or not to blog about it.

So this cartoon doesn’t really apply to me, but having spent another hour at the gym yesterday, I can completely sympathise. 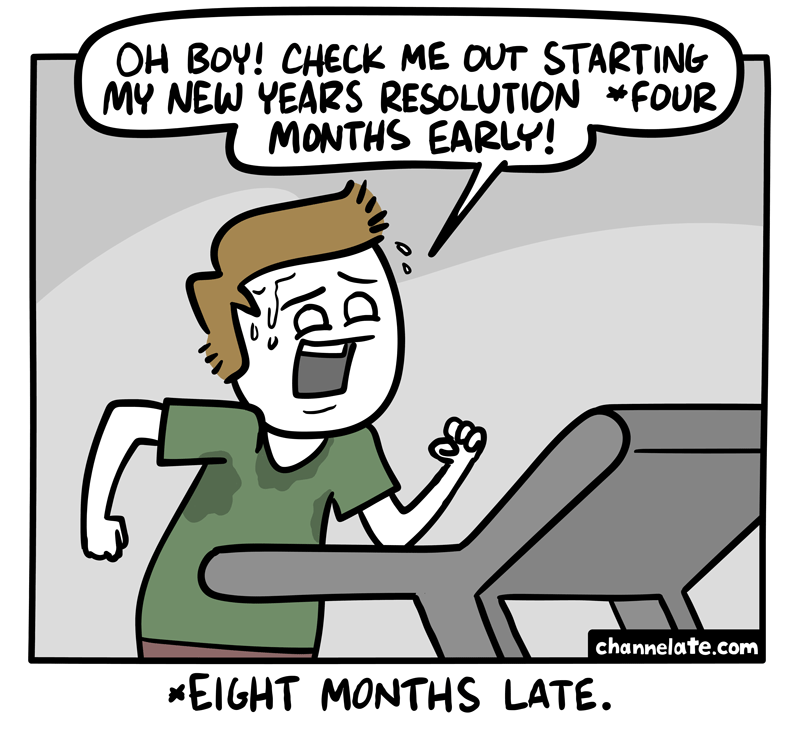 It’s all about how you choose to look at things, I suppose. Starting to do something good is a positive thing to do, no matter when you begin.

Although it didn’t feel great at 8 o’clock on a grey, wet Monday morning, I’ll be honest.