Yesterday, the Burj Khalifa (or Burj Dubai, depending on who you’re reading) was officially opened in Dubai, breaking records all over the place. Stuff to do with elevators and concrete pumping, having lots of floors and a really high mosque.

Oh, and at 828m, it’s also the tallest man-made structure in the world, of course. 828m is a whole lot of height – the Burj would stand over 150m above the 669m Lion’s Head in Cape Town if it were built alongside it, although I’m pretty sure planning permission would be refused.

And before the Burj came along, that record belonged to the  HUGE Taipei 101, the MASSIVE World Trade Center or the REALLY TALL CN Tower in Toronto. Or did it?

Since the collapse of the Warsaw Radio Mast on 8 August 1991, the KVLY TV Mast in North Dakota, USA has been the tallest extant man-made structure. That was its claim to fame. That and the fact that it transmitted TV signals, but then other shorter masts do that as well.

And now that claim to fame has gone.

Still, at 628.8m high, the KVLY Mast is still tall enough to warrant lots of space filling if you decide to put a picture of it down the side of a blog post.

Or some sort of adrenaline-packed fairground ride, anyway.

I’m watching the Arsenal v Hull match including the disgusting off-the-ball antics of Samir Nasri with a fine supporting act of comedy refereeing by Steve Bennett, while being annoyed by the all-new, all-singing, all-dancing, all-bloody irritating WordPress 2.9, so I’m popping a quote photo up here. This was taken at Munich’s 2009 Oktoberfest, I’m told. 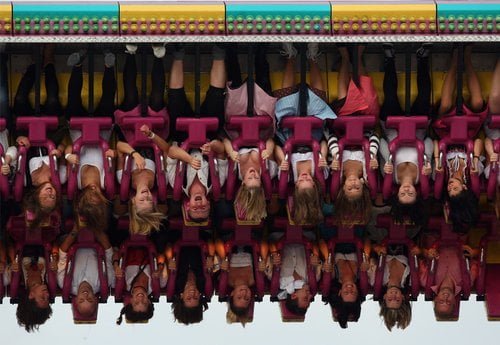 Reminds me of the annual St Giles Fair in Oxford, where the kids from the estates used to congregate under these sort of rides, hopeful of picking up any loose change from the punters.

Because – as you can see – anything that’s not properly secured is in grave danger of falling out.

I learned a lot of new stuff last night on my management course. Last night’s topics were “dealing with conflict” and “establishing a good rapport with your customers”. These are obviously hugely important things to master when you are wanting to run a successful business. The most important thing that I discovered last night was that – contrary to the old adage – the customer is not always right. In fact, even if the customer has a valid complaint and speaks to you about it in a calm and rational manner, then you are quite at liberty to tell the customer that he “has an attitude”.

The management course in question was an impromptu affair, held at the Ocean Basket in Plumstead, Cape Town. I’m a big fan of the Ocean Basket chain of restaurants – it’s good food, it’s well cooked and they have quirky adverts which often spell the word “fish” as “feesh”. And it was for these reasons that we decided to get takeout from their Plumstead branch. Having ordered by phone and been told it would be ready in 15 minutes, we arrived at the restaurant 15 minutes later and were greeted by a very friendly lass called Robyn, who happily took our money and showed us our food, ready to go.

But uh-oh. That’s a Hake and Calamari Combo with rice and we wanted a Kingklip and chips. Just like we ordered and just like it says on the till slip, see? Never mind says Robyn – she’ll sort us a Kingklip post haste. Of course, at this point I should have remembered all the bad things that I have experienced at the hands of the South Africa Post Office. Yes, of course they are known for the speed of their service, but not in a good way.

Time passed by and pretty soon, we had been waiting half an hour, not enjoying the unenjoyable view. And so had the rest of our food, which had been placed in a prime position for looking at the funeral parlour across the road, quite literally chilling by an open window at the front of the restaurant. Which was nice. Unless you like your food warm.
As we (once again) asked Robyn to check on the status of our Kingklip and watched as she went across to talk to the restaurant manager who was barking orders from the kitchen hatch, we were bemused to see an argument begin between the two of them.

I went over to the manager and – noting how firm he was being with Robyn, impressed by his authoritative approach and anxious for my management workshop to begin – asked politely where our Kingklip was.
He grunted, like a manatee. Actually, I have no clue what noise a manatee makes, but think of what a manatee looks like and you’d imagine it grunts in a manner similar to the way in which the manager of the Ocean Basket who I was just talking about, did. Phew.

“It’s in there,” he stated (the bleeding obvious) flapping his right flipper toward the kitchen, “my Kingklip always takes 45 minutes.”
“Oh right,” I countered, mildly confused, “but your staff told us our order would be ready in 15 minutes, so…”
“They lied,” he interrupted.

I was taken a little aback. “Well, perhaps you should sort that issue out,” I suggested.
“What do you think I’m doing?” he asked, incredulous.

At this point, I resisted the huge temptation to suggest that what he was doing was not getting my Kingklip and, eyeing his somewhat portly figure, I began to wonder if he had actually eaten it himself.
Then I reminded myself that manatees are vegetarian.
Then I reminded myself that he wasn’t actually a manatee, he just had some of the physical features and the grunt of a manatee (if, as was queried earlier, manatees do in fact, grunt).

Sadly, this hypothesising took far too long and he dived, sea mammal-like, into the waves of the gap in the conversation.

“You have an attitude,” he stated.

Perhaps it was the manner in which he said it, but I had a feeling that this wasn’t a compliment. But as I was about to respond with a magnificently pertinent and witty comment that I, sir, would still be drunk in the morning (or something of that ilk), which surprisingly appeared on cue from the depths of my brain, a box of Kingklip was thrust under my nose and the moment was lost.

After a short seethe home and some hot microwave action, we enjoyed the feesh. The Kingklip, ironically, was especially good. The service was bloody awful, but made for a blog post. What you might call a win-win situation.

If it wasn’t for the poor service.

Never believe a thing they tell you.

It all began when the buyer, new to the job, went out to the nectarine farms. His inexperience was quickly detected by the evil nectarine farmers who had barns filled with dud fruit.
They’re not ripe, they’ll never be ripe.
But the buyer didn’t know that. He’ll take the lot, please.
Here’s the fat cheque – put them on the back of the lorries.

Once back at the warehouse, the managers were aghast: money down the drain – we can’t sell unripe nectarines. In this terrible financial climate as well. We’re for the chop once Mr Woolworth hears of this. If only there was some way out. But there isn’t. It’s brilliant. And we’ll put “KEEP REFRIGERATED” on them right underneath the bit where we say “will ripen in 2-3 days at room temperature”. Confusion will reign.
And before anyone knows what’s going on, we’ll have sold the whole lot and the customers will only have themselves to blame for believing us and keeping them in the fridge.
Or not keeping them in the fridge. Whatever.
It’s a win-win situation. Unless they want to eat the nectarines.
Which they won’t, because they’ll never get ripe. I don’t usually play around with my photos on the computer “post processing”. As far as I’m concerned, once they’re taken, they’re taken: I don’t have the software, the time or the inclination to mess around with them. That’s something else to learn and I haven’t even learnt how to take photographs yet.

However, I just poked this one of Alex’s Winnie the Pooh sprinkler a bit and I quite like the results.
I think that this is one of those photographs that is best viewed large and you can do that here.

There now. That wasn’t so controversial, now was it?