Here, via The Poke, are 28 Invaluable Lifestyle Tips From Chat Magazine.

Some aren’t that bad, although there was nothing that jumped out at me as being a really good idea.

However, there are several that are just terrifyingly, mind blowingly, bewilderingly bizarre: 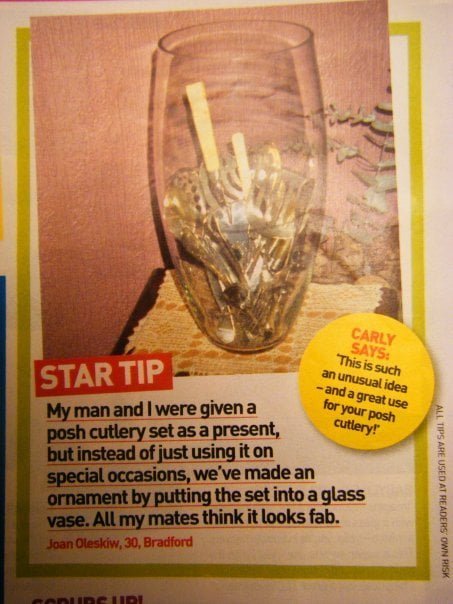 A sobering reminder: These people exist, and they walk among us.

I love Guy Fawkes Night and I love these tips to make it EVEN BETTER from Michael Spicer, via The Poke: 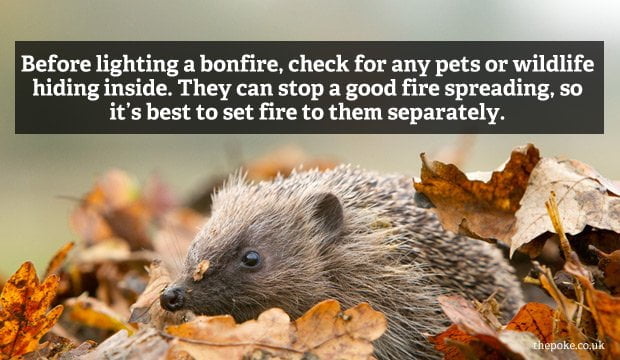 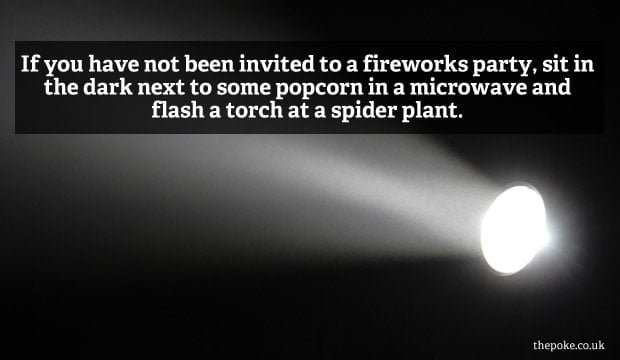 I await, with some dismay, the traditional plethora of comments and complaints from pet owners, who presumably weren’t aware of the 5th November before buying their dogs, cats, children etc.

We’re heading back to the Tips page of Popular Mechanics for this one. It won Top Tip for July 2013.

As time moves on and we get older, some of us are faced with the loss of our close detail sight. Fading eyesight is usually addressed by purchasing reading glasses from a chemist (I have pairs of these dotted all over the house and garage). However, sometimes the magnification of these glasses is just not enough for close-up work.

My simple solution: acquire a second pair of reading glasses (perhaps from your wife), place one pair over the other and hey, presto! You may look like a character from Revenge of the Nerds, but it really works!

Why has no-one else thought of this?

Ian has obviously got a keen mind. Perhaps, in these winter months, he noted that in order to be warm, he could put one jumper on, but in order to be warmer, a second jumper, place over the top of the first, was required. Or, potentially, he had to get something down from a particularly high shelf and became aware that while standing on one box got him closer to being able to reach said object, it took another box, place on top of the first, to make it possible for him to actually get to the shelf.

These may seem like simple observations, because they are, but let’s face it, none of us took these observations and applied them to optics and the correction of age-specific deterioration in vision, now did we?

Ian did. He did that.

And then he wrote to Popular Mechanics about it.

What Ian did then, though, is deeply puzzling. He stopped. He halted in his extrapolation of this great idea. Why he chose to do this is unclear, because surely for a great mind like that of Ian Ruinaard, merely sating himself with having the vision to complete close-up work would not be enough. Surely an exploratory continuation into this 1+1=2 phenomenon could have yielded further amazing results?

Ian stopped. But that didn’t mean that I had to.

Three pairs of chemist-bought reading glasses, perhaps acquired from the wife – perhaps selected from the pairs dotted all over the house and garage, it really is up to you – placed over each other and hey, presto, I could see LOADS OF STUFFS.
This gave me another idea. I quickly acquired an extra pair from the wife and then collected all of the pairs that were dotted all over the house and garage. Then I burgled the local chemist and chucked all the pairs on top of each other.
And then I looked.

The results were remarkable, if a little scary. It appears that I had created a nerd-like (but rather effective) face-mounted microscope. With incredible power.

We’ve all heard how many bacteria there are on a kitchen dishcloth, right?
Well, now I could count them.
Individually.
From my bedroom.

This was fantastic, and I’ve already applied to the local patent office to ensure that no-one steals my idea.

Indeed, the only issue I could see (geddit?!?) with this marvelous new-found vision-accentuating device was that my field of vision was now sadly some distance beyond my field of reach, making it rather difficult to actually utilise this undoubtedly exciting and potentially life-altering ability.

“Now, if only I could somehow change that,” I thought, as I pulled on my gloves and headed out into the cold.

Keep the change
Finding change for car guards at short notice can be a pain. To solve the problem, I store a few coins in my car’s ashtray, pressing them edge-on into a blob of Prestik to stop them sliding around.

It’s a problem we all have. You park your vehicle, give the car guard a nod and a wave – maybe even ask his name if you have time, but try to avoid getting into a deep conversation about the continuing political ambitions of Joseph Kabila – and head off to your meeting/football match/dinner.
Upon your return, a couple of hours later… erm… was it Charles?… well, whatever – the car guard is still there. And he’s awake. Amazingly, your car seems to still be exactly where you left it as well.
Who could have predicted this scenario, save for everyone, ever?
Surely some sort of reward is due for security services rendered? But you have no change at short notice.

The first place that every single South African driver looks is in their ashtray, for the simple reason that that’s where every single South African driver keeps their change. Even smokers keep their change in their car ashtray, because they use the roads for their ash and cigarette butts. Al de Bruyn’s masterplan gives us nothing innovative or helpful here.

But then, as you get into your car, lock your doors and glance nervously around to see if… erm… was it Alfred?… well, whatever – is hanging around looking for some payment from you: disaster strikes.

THE COINS IN YOUR ASHTRAY ARE TOTALLY AND HOPELESSLY JUMBLED UP!!!!!!

You fumble; dazed and confused by the plethora of assorted metal discs that lies before you. Panic is setting in – you’ve been in your vehicle for almost seven seconds now and… erm… was it William?… well, whatever – wants some money.

POP QUIZ, HOTSHOT – WHAT YOU GONNA DO NOW?

Actually, you’re going to relax, chill out, smile through your window at… erm… was it Douglas?… well, whatever – and glance down at your ashtray, in which there are 6 coins of varying denominations, stacked, in order of value – edge on, nogal – in a piece of Prestik.
How long have you been parked there? How dodgy is the area? How is the weather? Did… erm… I think it was William, actually, wasn’t it?… well, whatever – remember you? These are the questions you will be asking yourself as you reach towards the carefully ordered small change, all so very perfectly aligned in your ashtray. Al’s method means that once you have decided how much you wish to pay your car guard, some rudimentary mental arithmetic is all that will be needed to select the appropriate coinage required to make up the requisite sum.

I like Al’s idea. My evenings out and about in Cape Town are regularly spoiled by the spectre of having to find change for parking guards at short notice. It occupies my mind from the moment I park my car, preventing me from conversing with my friends over dinner or analysing the football over a beer at Fireman’s. Yes – Zuma does face many challenges in the run up to Mangaung, but do I have a R5 coin for the car guard? Indeed, that was an incredible cross-field ball from David Silva, but I’m going to look properly tight if I can’t find more than 50c in my car ashtray.

And may I suggest some degree of future-proofing for Al’s Bruyny plan? (see what I did there?)
With inflation constantly inflating, it won’t be long before every informal roadside transaction (careful now) is carried out with notes, rather than coins. For this reason, you should maybe keep some notes in your car ashtray BUT – use a paperclip to stop them from sliding around.

That little gem for the future is on its way to Popular Mechanics right now and it’s going to win me a Jigsaw Sawing Station Combo Kit from Bosch.