Incoming from my Dad:

Former Blade Jostein Flo is one of very few players to have a move or specific tactic named after him. In Norwegian, it is called “Flopasning” – translated into English as “The Flo Pass”. It gained prominence during a period of the early 1990s when the Scandinavians were ranked as the world’s second best team and utilised a very basic ploy of full-back, usually on the left, sending up a long diagnonal ball up to the totemic Flo.
Though a striker, he would raid down the right using his height to his advantage by heading the ball on for a central midfielder or striker who knew their job was to dart through and test the opposing keeper. Something of a long ball tactic eschewed by purists, it proved highly effective for a prolonged period as defences struggled to formulate a plan and is still used by many Norwegian clubs.

This was taken from Darren Phillips’ The Sheffield United Miscellany and holds particular relevance for me since I apparently, allegedly resembled the lanky Norway striker (and notably not his more famous younger Chelsea-playing brother Tore André) in those early 1990s. It all came about when a friend in Halls at Newcastle University looked at the poster of my beloved Blades on my wall and asked why I was on it.
Turns out that after a few drinks and in poor light, one tall blond bloke looks very much like another tall blond bloke.

I never really saw it myself – I was far more handsome.

But the nickname stuck and you’ll still see me in one of my Sheffield United shirts – or that of the 5-a-side team I play for here in Cape Town – with the name “Flo”  proudly across my back. Back then, it was very popular with fans at Bramall Lane as it was only three letters long and therefore cost less to have on your shirt. His squad number at the Blades was 12, but 21 has always been my lucky number, so I turned that around a bit.

I didn’t know this though:

Jostein Flo was a very good high-jumper during his youth and remains on his country’s list of all-time best practitioners of the ‘Fosbury Flop’ with a leap of 2m 6cm in 1987.

Such were the unusual circumstances in which I found myself over the weekend and such were the demands of Sky TV for a Friday evening kick off that I’ve just had a “oh christ, I’ve left the iron on!” moment.

I can’t believe I didn’t blog about this earlier, but I see no harm in blogging about it now. 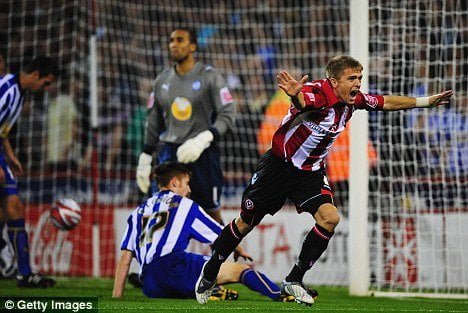 Not that there’s much to blog about. Thrilling game. We won, they didn’t.

Which is all as it should be.

what’s where at bramall lane, originally uploaded by evissa.

After the bitter disappointment of last season (which was actually only 9 weeks ago, give or take), it’s hard to raise my hopes yet again, but somehow, I will. I always do. I always will.

So, COME ON YOU RED AND WHITE WIZZZZZAAAAARDS!
(noting that, of course, you’ll be in your away strip for this evening’s game)

Well, that was suitably depressing.

My god, that Mike Dean is a complete twat.