More from this story.

But then, suddenly yesterday…

Surely this change of heart is solely due to compromises on policies and outcomes leading to better service delivery, because – let’s be honest – what could go wrong? Their track record on this sort of thing is perfect:

The refusal by the IFP to co-govern municipalities with the ANC in KwaZulu-Natal is a culmination of decades of mistrust arising from what the IFP perceives to be unkept promises to the electorate and a disgraceful breach of a solemn undertaking to its leadership.
In the words of IFP president Velenkosini Hlabisa, the ANC cannot be trusted as it “has not been honest with us in the past. They have let down (the) people of South Africa, and the voters clearly expressed themselves when it comes to the ANC.”

But that was last week.

This week, they’re the best of friends and everything is going according to plan so more politicians can have more power.

Who could have seen it coming?

When is Cyril Ramaphosa going to define what is unfolding by its correct term? This is a counterrevolution organized from within his party to stop consolidation of a democratic state because its sponsors are terrified of a functioning state with a rule of law.

Looking at the situation in KZN, and really, really not wanting to be dramatic, I am rapidly coming round to this conclusion as well. Yes, of course we have a million problems. The unemployment rate, the poverty, the pandemic, the years of poor leadership, the corruption, the broken promises: they all made for piles and piles of dry tinder, ready to ignite. Zuma’s jailing was just the spark that set it all off.

We have protests literally every day in SA. Some are small, some are big, some have even run on for days at a time. But this one is clearly different. Not just in its sheer scale, but also in the targets of the mobs. Sure, supermarkets, shops, malls… when this sort of violence occurs, they are sadly always in the firing line. And sure, some of that can unfortunately spill over into buildings nearby. You can argue all you like about why looters aggrieved at their situation need to steal 80″ LCD TVs to demonstrate their anger: it happens every time.

That’s clearly orchestrated, and that’s hugely worrying. While we were all rightfully distracted by the fires and chaos right in front of us, something very sinister has been going on in the background.
Deliberate political agitation? Certainly.

It’s a mess. A long, complicated, convoluted story has brought us to this point. Many people will even disagree about where the tale begins and which route it took. Short-term, it doesn’t matter. We’re going to be faced with food shortages, even worse unemployment, possible forced migration, and probably all against a backdrop of continuing violence and increasing instability.

It’s still very early days, but if you think that tweet above is accurate, here’s an interesting take (also from twitter, but I can’t find where):

The coup failed when many provinces refused to join in. We have averted a much bigger problem than what you are seeing now. Look at how key people went missing during this critical time and emerged when a coup failed.

And yes: suddenly big names like the Premier of KZN, the Police Minister – both prominently in the Zuma faction – and a few others are speaking out. Not that there’s anything unusual in that, aside from their complete silence for the first few days of this. But why now, suddenly?

And this guy agrees:

There is a clear attempt at rendering South Africa ungovernable. To use state paralysis as a bargaining chip to achieve a political objective. Call this what it is, its an insurgency.

I’m not convinced that this is done. The embers of the KZN blazes might still land and ignite fires in other places. But for the moment, much of the rest of SA has been spared.

Keep your thoughts and prayers. Donate money here if you can and you want to help.
Stay safe, wherever you are.

Phezulu Safari Park was arguably the second most bizarre place we visited in KZN. (More on the winner of that auspicious prize at a later date.)
A mish-mash of animals, posh housing, a curio shop, an apparently traditional Zulu village and a snake park, the reviews on Trip Advisor were divided, from the sublime through to the frankly terrifying. It wasn’t cheap either, so we were taking a bit of a chance.

First up was the tourist-aimed – but still educational – Zulu dancing and village tour. Perhaps the most surprising thing about this was that about 70% of the audience was Zulu. The dancing was good, the story-telling and village tour, interesting. I learned a lot.

The (45 minute) game drive was initially disappointing, but then I had been rather spoilt recently at San Bona. Still, the kids got to see a giraffe up close (real close) and then we headed back towards the reception place, through the larney housing complex. And, weirdly, that’s where all the animals were. We were asked not to take photos with houses in the background, and we did our best to comply, but it was difficult, because literally, that’s where all the animals were. Wildebees, impala and zebra all over your grass: lawnmowing and fertilising in one. 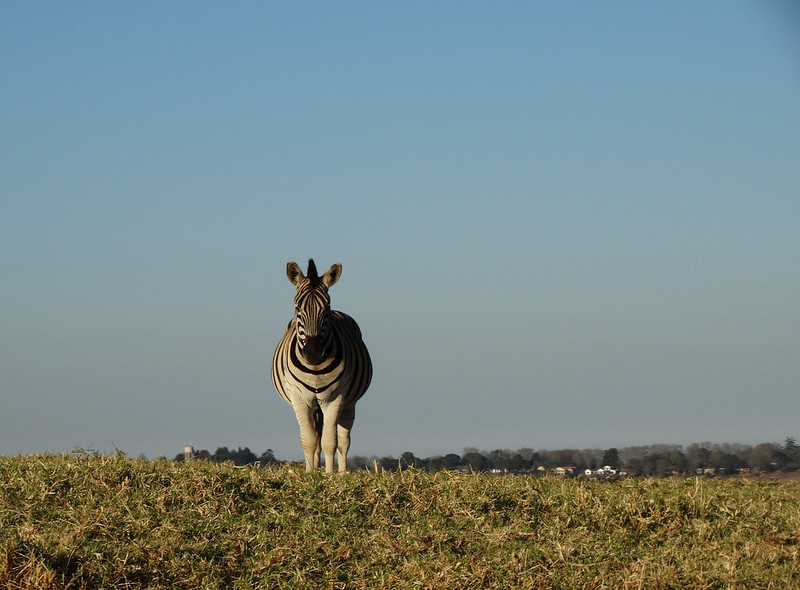 The beagle would have (rightfully) gone bonkers. The guide told us that there was nothing there that would eat you (‘erbivores, in’t they?), but that an irritated wildebees would happily trample you to death. (And we all know about the dangers of giraffes already.)

It wasn’t San Bona (although in fairness, it never claimed to be), and the kids did enjoy seeing the animals at such close quarters. But it was a bit of a weird experience.
As I mentioned above, the reviews do seem to be a bit hit and miss, and that describes our experience pretty well.

I guess what I’m saying is that if you are headed that way, this might just be for you. Or it might not.