We have a strange attraction to geographical extremities, don’t we? There’s a fascination with being the most Westerly person in Britain, or the most Northerly individual in Mauritius or whatever.

Regular readers will know that I like to spend quite a bit of time down by the Southernmost point in Africa. And actually, there’s something quite sobering about wandering down past the cairn there, turning to face North and knowing that each and everyone of the more than one billion inhabitants of the continent are in front of you. Even regularer readers will know that I hold the record for having written the most Southerly blog post on the continent.

For all that I love the place, it’s disappointingly nondescript. No towering cliffs, no jutting prominence (careful now). It’s flat and if there wasn’t the little monument there, you’d be hard pressed to identify the particular bit of coastline which is the official tip of Africa. And maybe that’s why so many tourists think that it’s Cape Point that matters, but for all it’s rugged beauty, including towering cliffs and jutting prominence, it loses huge marks for only being “the most southwesterly” point of Africa.
What does that even mean?

The most Southerly village in Iceland – as we all know – is Vík í Mýrdal. I bring that up because they’ve got a big, black beach and a stack there, as shown in this 8 second exposure: 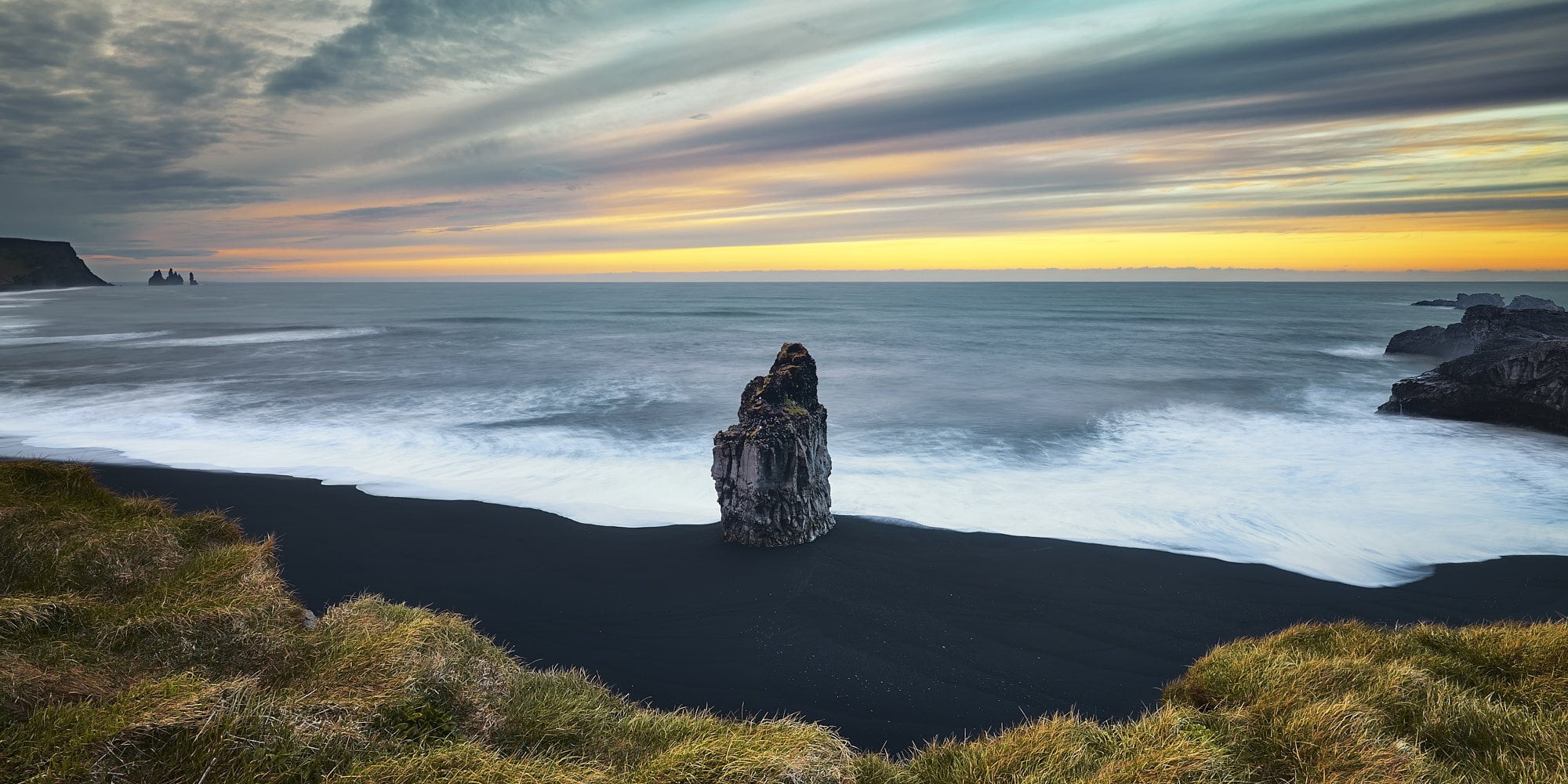 Iceland has always been one of those places that I would love to visit, and if I ever do get to go there, Vík í Mýrdal (population 318) will certainly be one of the places I will want to see. Aside from the dramatic landscapes, other reasons to visit Vík í Mýrdal include it being the warmest place in Iceland with an annual mean temperature of 5.3°C, as well as the long overdue eruption of the Katla volcano which experts feel, when it occurs, will completely obliterate the village by melting the Mýrdalsjökull glacier, which lies over the volcanic site.

Should this ever happen, much may be made of the fact that only the church survived the flash flood. But this is merely because it’s built on higher ground, just outside the village, rather than any divine intervention.

Football is a funny old game. Iceland beating England last night proved again that there will always be shocks and surprises in football tournaments. And that’s a good thing. Otherwise, why bother? If we were just to look at the pre-tournament rankings, we could see which team was “the best”, and then just give the trophy to them.

How dull would that be?

Belgium would win Euro 2016 (which they still might, at the time of writing), Argentina would have won the Copa America (which they nearly did, but actually didn’t), New Zealand would obviously win all the rugby things forever and Australia would win most of the cricket. All without the need for any tournaments.
In fact, the only place that this approach would assist would be in tennis, which is a terribly boring sport. Let’s just gooi the big plate to Serena and the gold cup to [checks spelling] Novak Djokovic, saving two weeks of our lives and a million comments about strawberries, cream and incessant rain.

The 24 teams which qualified for Euro 2016 all hold places within the top 28 places in the UEFA rankings. The notable exceptions from those attending France are the Netherlands and Bosnia & Herzegovina, who were 8th and 14th going into the tournament. Also, please note the less surprising absences of Denmark (26th) and Greece (27th).

As I said above, rankings aren’t everything. But if England had lost 2-1 to Sweden last night, no-one would have been hugely surprised. Yellow and blue, blonde-haired Scandinavian footballing superpower, ne? But actually below Iceland in the latest FIFA rankings.

And if England had beaten Iceland and gone through to face France, no-one would have been shocked when Les Bleus swept past Les Rosbifs through to the semi-finals. But France are way below England in the world rankings. Austria, also beaten 2-1 by Iceland last week, didn’t even make it out of the group stages and they’re supposed to be the 5th best team in Europe.

Yes, I was surprised as well.

(Those numbers represent the world rankings, by the way.)

I’m not making excuses for a very lacklustre England display last night. Too many individual errors, too many poor performances. But take nothing away from Iceland. Tactically, they were brilliant and I’m well aware that the result was an incredible triumph for them and testament to their amazing football programme. But if England were going to go out (and they were), I’d rather England go out to them that anyone else. We’ve always liked Iceland at 6000 miles… and now Norway has “been done”, it’s next on the bucket list of holiday destinations.

Iceland were already everyone’s second team at Euro 2016, and now that England are gone, they’re my first team.

UPDATE: And this quote from James Clark on Twitter:

I have no objection to losing to a side whose fans greet every set piece with a Viking war chant complete with improvised shield thumping.

…sums it up perfectly.

Hey! Look! It are the best photos from November from National Geographic’s Travel 365 pages.

It can like to include this one of the Aurora Borealis taken in Dyrholahverfi in Iceland. 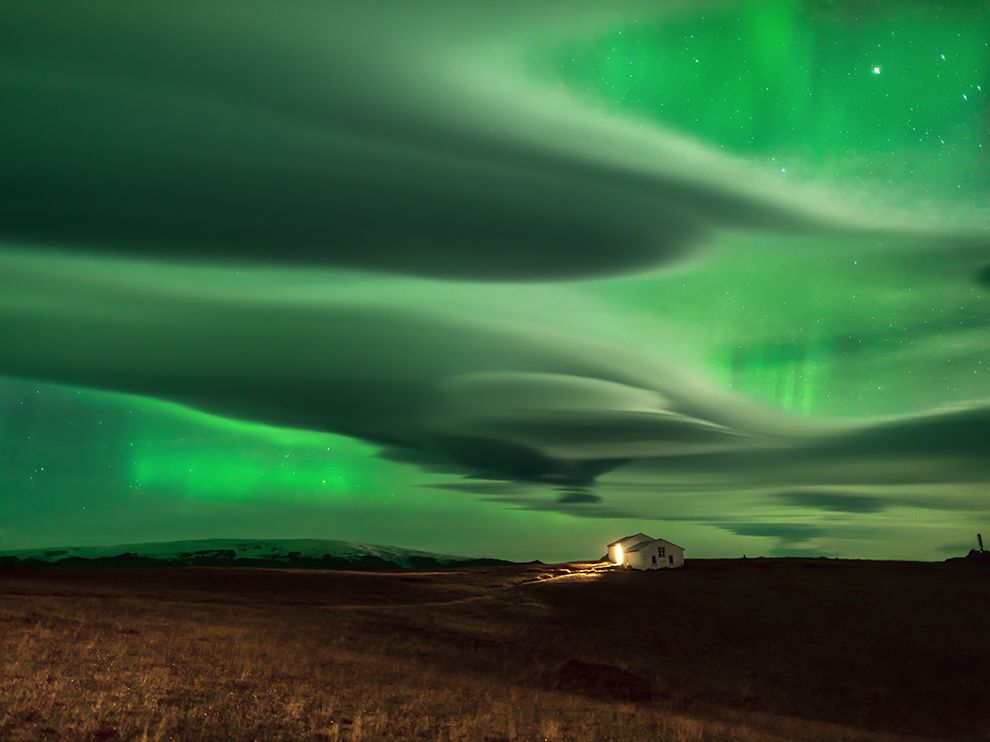 More loveliness from the bits of our planet we haven’t broken yet, here.

Yeah – after this, that might come as a surprise. But wait, there’s more. This massively disappointing volcano is also in Iceland, home of exciting stuff like whale-hunting tourism, puffin pie and the Best Landscapes In The World™.
Iceland doesn’t do “massively disappointing”. Or rather, it didn’t, until now.

Imagine my excitement upon reading this headline:

The view from inside Iceland’s Thrihnukagigur volcano

Thrihnukagigur – still way up in the top 50% of Icelandic volcanoes listed by ease of pronunciation. And now they’re going inside it:

I’m being lowered through the dome of a subterranean cathedral-like space. Above me, the volcanic crater is a small bright circle in a thin tube. Beside me rainwater runs down ripples of frozen lava and cascades into the quiet depths.

OMG! How cool? How HOT? But then anticipated amazement turns into that crushing, massive disappointment.
Because what it turns out to be is just a big cave.

And I’m not alone in thinking this way; even its discoverer – a local opthalmologist – was rather unimpressed:

On Midsummer Eve 1974 Mr Stefánsson was lowered down into it with the help of nine friends. He was really disappointed.”I dreamt about finding a drainage channel with lava falls, lava pits and formations, never seen by a human eye before,” he says.
Instead he found an expanse of bare rock with a pile of rubble at the bottom, “like a stone quarry”, he said.

And, over the intervening 41 years, bugger all has changed.

Still, there’s a video of this expanse of bare rock with a pile of rubble at the bottom, so click that link above and go and play.

Just don’t expect to be impressed.

We at 6000 Towers think that Iceland is pretty cool. We might have mentioned that before. Repeatedly.

But here’s yet another feather in the cap of the chilly volcanic island’s cap: Lögreglan – The Reykjavík metropolitan police official Instagram account.

How cool are these guys? 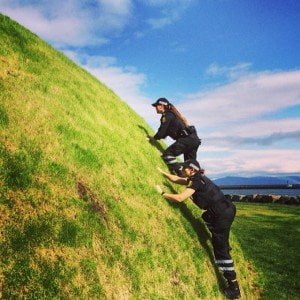 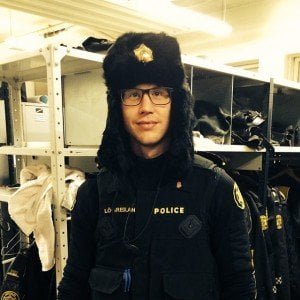 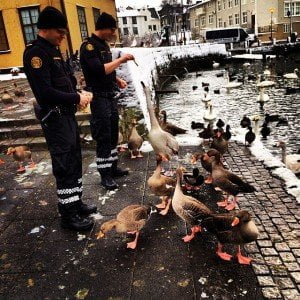 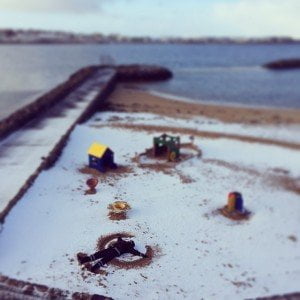 Presumably, there’s some actual police work going on at some point as well. Presumably.

I do use Instagram, but I use it to share photos rather than to follow other people – there’s Flickr and or twitter for that sort of thing. However, I’m going to make Lögreglan the first and only account I’m following. And I won’t be alone, with their cult following of almost 19,000 users.

I somehow can’t see the Cape Town metro cops doing something like this, and even if they did, I can’t see it being nearly as good as the Lögreglan one.

Yes, South Africa is very cool, but Iceland is (quite literally) a bit cooler.