It’s perfectly legal, but safety fun sponge organisation Arrive Alive (despite the fact that I’ve never ever actually done anything else) say I shouldn’t.

They use arguments such as:

Driving long distances can be very demanding on our feet and ankles. By wearing the right shoes and leaving the feet feel relaxed, we can enhance the control we have over the vehicle and react faster to changes in traffic or road conditions!

(Apologies for the dodgy English in there: their words, not mine.)
And:

Repeated use of the clutch could end up being painful, causing cramp or other spasms in the foot and reducing the ability of the driver towards effective control of the vehicle.

(I know, more problems with simple English.)
Oh, and (should the worst happen because of the reasons above):

In cases of traffic crashes with nothing to protect the feet, you may tread on broken glass and debris and sustain major injuries.

It’s all a bit pathetic. More on not overtaking on solid white lines, not driving drunk, not driving when tired, and not wandering along the hard shoulder in dark clothes on a dark night (it’s a real thing here), less on my selection (or not) of shoe, please.

If we were meant to wear shoes to do foot stuff in, why weren’t we born with shoes instead of bare feet? Why do gymnasts – for whom haptic contact with the floor or beam is essential for proprioception – not wear shoes when gymnasticking? It’s not just humans, either: the Norsk Lundehund, bred for its ability to traverse thin, slippery cliff edges, above dizzying, terrifying drops into the freezing Atlantic Ocean doesn’t wear shoes. Mind you, nor does it drive, but we’ll leave that minor issue out of our argument here.

I’m not a gymnast or a puffin hound, but I do drive barefoot a lot of the time, and I plan to continue doing so.

I got a mildly panicky voicenote from the Boy Wonder just after he arrived at school this morning. He had left some schoolwork at home. This doesn’t happen often, and normally it would be his indaba – the learning curves here are steep, hey?
But, being fair, there were a few mitigating circumstances with this one, so I used it as an opportunity to try my first drive since… like… forever… and took the missing flip file up to the school once the local rush had subsided.

I had to test my leg a bit before I set off, but to be honest, the clutch work (for it can like to be my left leg what are the problem) was actually just like doing my exercises, once I’d moved the seat forward a bit.

We live close to the school – it’s only a 3km round trip – but it was still quite tiring (because my leg muscles have basically disappeared over the last month) and required more concentration than I remember: 60kph seemed awfully fast.

But it was really, really good to be able to get around again.
Another box ticked.

I’m getting there – by car, nogal.

Road accidents claimed over 14,000 lives in South Africa last year, and almost 15% of those deaths were blamed solely on speed. Now, you might think that I would therefore be advocating for lower speed limits, but I’m not. That’s because no-one in South Africa obeys the current speed limits anyway. And then, if they do get caught speeding, no-one pays their fines. So there’s no respect for the law, because there’s limited enforcement of that law and very limited risk of ever having to answer for your naughtiness.
But we all still like to complain about the taxis, don’t we? Where are the police (funded by your traffic fines) when you need them?
Well, you didn’t pay, so they don’t exist.

Given the appalling record of South African drivers and speeding, this seems like a very bad idea indeed: 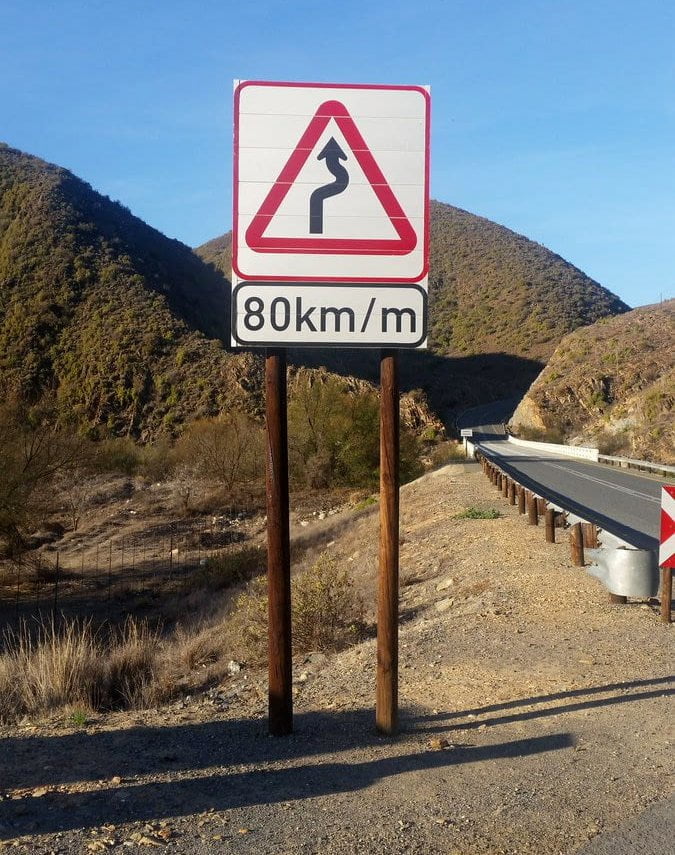 Now, I know that m usually refers to metre, but that doesn’t make any sense here. So m must refer to some length of time. We’d expect speed limits to be given in the traditional metric kilometres per hour (kph), but since hour begins with h, so we must therefore reasonably assume that m here is minute.

This appears to be awfully fast to me. Especially given the warnings about the somewhat wriggly nature of the road ahead, and that koppie standing pretty much straight on if you miss the right-hander ahead, because you were going a bit quickly or something.
Or because you sneezed. Because when you sneeze, your eyes close for about half a second. If you’re driving at 80kph, you’ll travel 11.1m with your eyes closed. If you’re driving at 80kps, you’ll travel (a rather prophetic?) 666 metres completely blind. Mind out for that obstacle you haven’t even seen in the distance yet.

4,800kph. That’s eight times faster than the world’s quickest dragster over a standard ¼ mile course. On the one hand, that was from a standing start, and there will clearly be no requirement for that here. But on the other, there were no corners for the driver to negotiate, and he was going 8 times slower than drivers on this road will be, so he didn’t die.

Thankfully, 4,800kph is still less than half the speed of a Saturn V rocket, so you could probably expect to die a quick and fiery death by being completely obliterated on that hillside and without actually leaving earth’s orbit. Small mercies, silver linings and all that.

Having loaded up the Ossewa – ‘n tradisionele vervoermiddel, veral in Suidelike Afrika – and all being well… we headed Oop North yesterday, via:

Eina – quite a ride. For those of you reading in the UK, it’s the equivalent of driving from Sheffield to just past Inverness. And you know that Inverness is a long way from everywhere, so “just past Inverness” is a near inconceivable distance.

Thus, I’m likely to be out of radio range for the foreseeable future, but posts will continue on 6000 miles…. via the seamless magic of WordPress.
As usual, please be aware that if some massive international incident, world war, political upheaval or mass outbreak of beaglitis virus has occurred, I will a) likely not know about it, and b) certainly not be mentioning it on the blog, because, as I am writing this, it hasn’t happened yet.

[EDIT: Actually, after I wrote this, but before we went away, there was some degree of local instability.]

Equally, if I die (or have died), you’ll only know when I don’t blog next Friday. Which will be good.

Good Friday, I mean – not great that I’ve thrown a seven.

Cape Town traffic police are closing in on their ten thousandth cellphone confiscation since they began confiscating cellphones in 2012. This isn’t a random thing though. No, they only take the cellphones off people who are using them while driving. You know, the ones who are clearly in contravention of Road Traffic Ordinance Regulation 308A, which prohibits a driver from holding a mobile phone or communication device in one or both hands or with any other part of their body while driving?

“The numbers are staggering and an indication that many motorists still refuse to acknowledge the dangers of using cellular phones while driving. It is astonishing to consider that people will very easily persecute drunk drivers for reckless behaviour, but cannot see the recklessness in fiddling with a cellphone while navigating through traffic,” said mayoral committee member for Safety and Security, JP Smith.

Look, this is Good. News. but it’s really just the tip of the iceberg, as I noted here.

And it seems that, as always, South Africa is high on the list of cellphone naughtiness while at the wheel – as you would expect given the impunity with which we treat traffic and/or any other laws. But it’s not just here that it’s a problem. In the US, the major cellphone companies have joined forces to produce the itcanwait.com campaign, and they’ve released some really good mini-documentaries to get with it:

It would be great if MTN, Vodacom et al. (Al being the only guy who’s still on Cell C) could team up and do something to try and reduce cellphone use while driving.
Although I think we’re still some distance from that tipping point whereby it becomes socially unacceptable to use your phone while at the wheel, I do think that people need something to remind them what tossers they are being, when in every single case – it can wait.

UPDATE: What happens to the over 6000 confiscated phones which haven’t been reclaimed? See this EWN report.