It’s ok: if you’re reading this, you’ve already done enough to be counted as one of the literally 10s of readers that visit 6000 miles… each day.

Thanks for coming along. But I know that you really want to head off somewhere else now and there is not better way of doing that than having a look out of someone else’s window using WindowSwap*.

You can go to a park in Hamburg, overlook a highway in Bordeaux, see some guys waiting to cross a road in Mexico City or watch an urban farmer at work in Bangalore. And why?

Let’s face it. We are all stuck indoors.
And it’s going to be a while till we travel again.
Window Swap is here to fill that deep void in our wanderlust hearts by allowing us to look through someone else’s window, somewhere in the world, for a while.
A place on the internet where all we travel hungry fools share our ‘window views’ to help each other feel a little bit better till we can (responsibly) explore our beautiful planet again.

I’ll be honest – it’s not quite the same as actually travelling the world, but it is a good deal cheaper and you’re actually able to do it right now.

I’m going to find time this weekend to record a bit of Cape Town and send it in. Maybe to go with my lockdown Flickr photo for a group with the same idea. 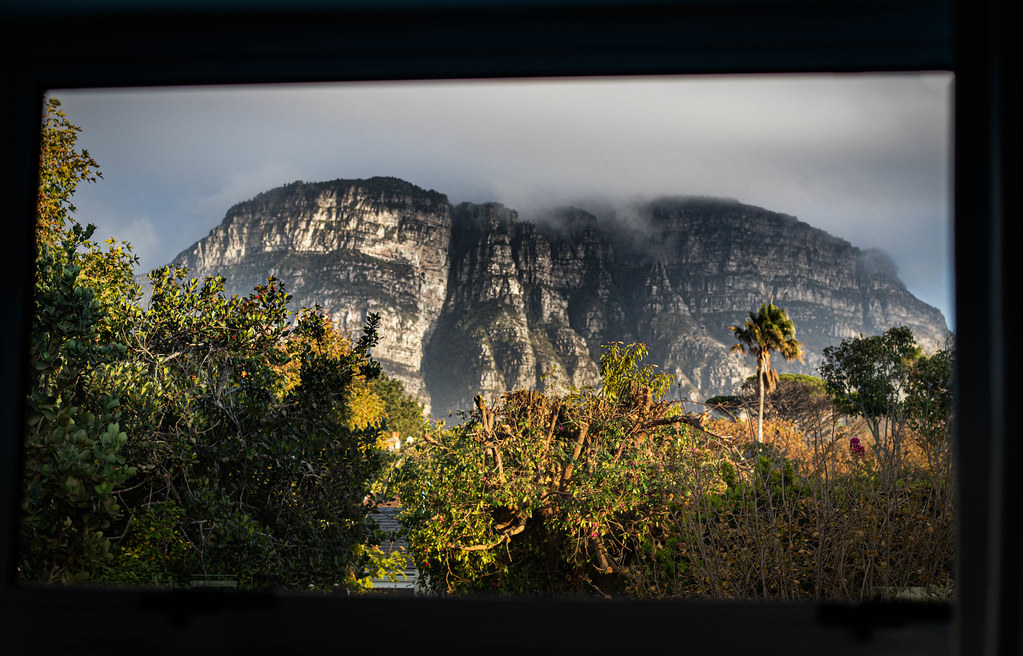 Right now though, a quick run around the block (to scout out possible views and angles).

I see some travel in my near future. Business rather than pleasure, but hopefully it will be an informative, interesting, enjoyable and rewarding trip.
Did I say “fulfilling”?
No, I didn’t, but hopefully that too.

I get to go on a plane this time. Talk about hitting the big time.

I’m not sure about how much spare time (not much I suspect) and connectivity (anyone’s guess) I’ll have while I’m away, so there will be a few pre-written posts around next week. Hey – you might not even notice, and there’s the added bonus of the chance of more posts should there be the inclination (and the time and the connectivity) to do so.

As I say, this is all planned for a few days next week, so normal service will continue until at least then. And if all goes well, while I’m away, my instagram might be the place to go to share my journey.

It’s perfectly legal, but safety fun sponge organisation Arrive Alive (despite the fact that I’ve never ever actually done anything else) say I shouldn’t.

They use arguments such as:

Driving long distances can be very demanding on our feet and ankles. By wearing the right shoes and leaving the feet feel relaxed, we can enhance the control we have over the vehicle and react faster to changes in traffic or road conditions!

(Apologies for the dodgy English in there: their words, not mine.)
And:

Repeated use of the clutch could end up being painful, causing cramp or other spasms in the foot and reducing the ability of the driver towards effective control of the vehicle.

(I know, more problems with simple English.)
Oh, and (should the worst happen because of the reasons above):

In cases of traffic crashes with nothing to protect the feet, you may tread on broken glass and debris and sustain major injuries.

It’s all a bit pathetic. More on not overtaking on solid white lines, not driving drunk, not driving when tired, and not wandering along the hard shoulder in dark clothes on a dark night (it’s a real thing here), less on my selection (or not) of shoe, please.

If we were meant to wear shoes to do foot stuff in, why weren’t we born with shoes instead of bare feet? Why do gymnasts – for whom haptic contact with the floor or beam is essential for proprioception – not wear shoes when gymnasticking? It’s not just humans, either: the Norsk Lundehund, bred for its ability to traverse thin, slippery cliff edges, above dizzying, terrifying drops into the freezing Atlantic Ocean doesn’t wear shoes. Mind you, nor does it drive, but we’ll leave that minor issue out of our argument here.

I’m not a gymnast or a puffin hound, but I do drive barefoot a lot of the time, and I plan to continue doing so.

You’ll be wondering if you need to declare your valuable personal effects to SARS before leaving South Africa, in order that you are not charged duty upon your return to the country, right?

After this alleged incident, there’s been some confusion over this, so here’s the definitive answer.

However: Yes, you do.

Unhelpful. So I looked for advice from some experts.

But before we go there, here’s an interview with SARS executive Beyers Theron in which he says:

If you have your laptop or cellphones with you, you’re not required to declare that when you leave the country.

So that’s clearly a no.
And here’s that statement from SARS, in which they say:

A more user-friendly and secure process has been created where the traveller completes a TC-01 (Traveller Card) notifying his or her intent to register goods for re-importation. This is presented to the Customs Officer who will then capture this online on a Traveller declaration system (TRD1). The traveller authenticates the declaration by signing on a digital signature pad. A copy is printed for the traveller to retain as proof of registration.

Which does appear to be a yes.

I’m flying out of the country soon, so I had a quick look at how many flights leave SA for other countries. Then I decided that that was a bit stupid because the numbers were just too beeg for my puny microbiologist brain to handle.
So I concentrated on Cape Town.

That’s a lot of flights. All of which got me wondering about just how many people were likely to be on those flights. So I looked up the most recent available statistics and found that on average, each day 2,760 people depart CPT on international flights.

Of those, how many travellers are local residents? There aren’t any recent figures, but a third seems like a reasonable assumption, based on what information is available. (Note that the figures are much, MUCH higher for JNB: ±80%.)
But back to Cape Town, because that’s where we can like to be looking at.

Now we have some numbers, I’can, and have been doing, some rudimentary calculations.

According to the missive above, each of those 920 people will have to go to SARS in town simply to register their personal goods (with proof of ownership for each) in order that they might not face having to pay duty on them upon their return.
Their cellphones, their watches, their laptops, their cameras.

920 locals per day = 6,440 locals each week, but since SARS is only open five days a week, that equates to 1,290 local people at that TC-01 counter each day. SARS is open 8am-4pm, so they’ll have to process 162 people per hour, or 2.7 people per minute every minute.
That’s 1 person every 22.2 seconds to ensure that everyone is accommodated and can:

avoid the inconvenience of having to explain ownership upon returning from travel abroad.

which clearly seems to be a perfectly reasonable and manageable target.

Of course, this legislation has been in place for years and years and years, and no-one has ever fallen foul of it until some petty jobsworth SARS official at OR Tambo decided to have a pop at the ridiculously named Mr Toler Wolfe-Coote as documented above.

The can of worms has been opened. But I’m sure the our erstwhile tax agency is completely and adequately prepared to deal with the situation.

Herewith a few (or more) thoughts on the last few days. In no particular order.

Sun City isn’t my kind of place. On arrival, the guy at the gate asked if I had reservations.

“Plenty,” I replied, “but the kids seem to be looking forward to it.”

Jokes aside, it is a ghastly, hideous place. Faux opulence, faux history and gaudy buildings are the order of the day. It’s repulsive… and it’s also completely incredible. It’s Grand West on South Joburg steroids. The scale of the place and the attention to detail is amazing. It’s other-worldly. And The Palace Hotel (where we’re not staying, see below) is an absolute work of art. You might not like it, but you have to admire the place.

And that’s the thing. If it’s not your thing, you need to get over it and just go with the flow and if you do, you’ll probably have a great time, like I did. Like we did.

This was a last minute, unplanned trip. One we wouldn’t even have considered were it not for the free air tickets that came with our new fridge. We’ve already spent a bomb on our Europe trip later in the year, so economy was key here. We chose the Cabanas to stay in, to save a bit of money. It’s been small and not very luxurious, but it’s been somewhere to sleep – we’ve been out and about the rest of the time.

The staff have been really helpful and are always smiling. That must take a lot of doing at the end of a long season. In fact, the only exception was a rude waitress at the posh hotel we had dinner at on Sunday night. She really did make an effort to be that exception though. Wow.

The breakfast buffet is cheap, cheerful and amazing value (included in the price of the budget accommodation). Two words for you:

The Valley of the Waves is a lot of fun. There’s something weird about watching a hundred-odd people standing chest-deep in an outdoor swimming pool, facing a wall and waiting for a single artificial wave every 10 minutes or so. But again, you join in and it’s kinda enjoyable. The tubes were great fun. I didn’t die on the Boomeranga ride, despite a couple of attempts.

The bus service is either brilliant or disastrous. Possibly both simultaneously. We never really worked it out.
(Or you could walk the 550m to the main centre. It won’t kill you.)

Resort-wide free wifi actually works, and it’s literally everywhere: from our room to the beaches of the Valley to the Forest at the back of the fancy hotel. Incredible.

We did a Family Safari Walk on our first morning. It was excellent. Zebras, Wildebees, Kudu and Impala and a lot of stuff you’d never have seen from a truck. The kids learned a lot. 10/10 would recommend.

Sun City is massively incongruous in the North-West Province, which is like an Eastern Cape Lite. You pass Marikana on the way here. It’s a massive reminder of how unequal South Africa is.

There’s water! I have had several long showers. You don’t realise how much you miss them.

There was a bottle of wine for R130,000 on the wine list on Sunday evening.
We did not indulge.

I need to enjoy our last morning before we head back to Lanseria and Cape Town, so I’ll leave it there. Photos will follow. Normal blog service will be resumed tomorrow.