Meanwhile, in the UK: 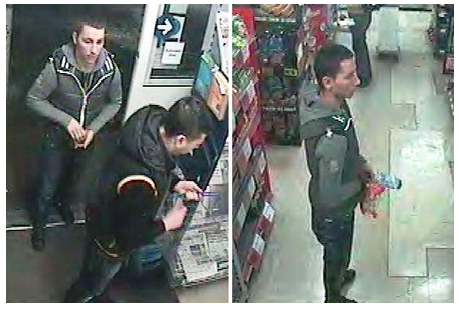 These are CCTV stills released by Humberside Police in the UK, relating to a crime at the Co-operative store in Swinefleet Road at 6.50pm on February 27. I realise that it’s now a couple of months on, but there’s a serious point to my sharing this:

A spokesman for Humberside Police said the men walked around the displays in the shop before one asked a staff member for assistance.
The other was seen on camera selecting a drink and a sandwich. He then approached the till but only paid for the drink.

Did you catch that little fact gently slipped into the end of that sentence? It could easily have passed you by: HE ONLY PAID FOR THE DRINK! This despite having selected both a drink and a sandwich, and approaching the till.

I’ve been doing some rudimentary calculation and this represents only a 50% payment ratio when considering the number of items selected. (Working: he paid for the drink that he had selected, but he didn’t pay for the sandwich that he selected, even once he had approached the till.) One out of two. Simply not good enough in payment terms, hence the appeal.

Now, you may think that selecting a drink and a sandwich before approaching the till and only paying for the drink was bad enough.
But no. It gets worse:

Both men then left the shop.

Silly because in only paying for the drink that you had selected and not for the sandwich which you had also selected when you approached the till, and then leaving the shop, you have landed yourself fairly and squarely upon Humberside’s Most Wanted list.
Yes, now your images appear alongside that man that missed the bin on Willerby Road with his slap chips wrapper in late January, and the individual who parked partially across the back gates to Swan Engineering on Scarborough Street for 13 minutes at 06:18am on December 16th 2011.

The might of the Humberside Police Force will continue to hunt you down and bring you to justice for selecting a drink and a sandwich and then approaching the till but only paying for the drink.
This sort of behaviour cannot, should not and will not be tolerated.

BRING BACK THE DEATH PENALTY! ON HUMBERSIDE!

But probably not the one you’re thinking about.

It’s been a busy weekend, but we still found time to finally make that ginger beer that we’ve been promising to make since… well… ages. And it is delicious.
We used this recipe from the Scrumptious blog and the kids had a whale of a time zesting lemons, stirring buckets of ingredients and helping to bottle the stuff before bedtime.

This morning – happy to note that none of our bottles had exploded overnight – I released the pressure before sticking them in the fridge and going and running around on a football pitch for an hour or more. When I came back, the young workers popped one open and: wow.
The ginger is actually rather understated, but as a refreshing lemonade-style drink, it’s an absolute winner. Almost half of our 5 litre stash has gone already. I suspect that the remaining 50% will struggle to make Tuesday.

In short, it’s simple and it’s delicious. An absolute must for summer.