As I start writing this, I realise that it’s my first post with WordPress 5.0. As usual with a WordPress update, I chose not to read any of the instructions – something that has never mattered before – and now I find myself quite (or more) bemused by the whole situation. My God, it’s horrible. How do I go back?

I clicked through on one of those review of the year things. This one was for Spotify, which I’ve only had for about 5 months.  Here’s my Top Artists, Genre, Songs etc.

That image might not look like much, but it took me 35 minutes to upload, so damn well look at it, even though it’s probably still far too big.

The several hours I spent solely on Ludovico Einaudi equate nicely with my air travel. His music has always been my goto on iPod or Spotify for calming, relaxing times on big planes.

Look at me with my lack of mainstream nonsense. And it’s not for want of being contrary. I like what I listen to. And I listen to what I like.

Right. You can do your Spotify Wrapped here. And I’d love to write some more about it, but this editor is wearing me down already. It’s fecking awful and I want to go back to 4.9. I have no idea how to add categories or tags and they’re supposed to making it easier, better, more intuitive.

It’s making me sad and I need to stop now.

Like a poor sequel, loadshedding (you may remember it from such terms as “Rolling Blackouts”) has returned, and once again, we are regularly being plunged into darkness.

Being plunged into darkness is never good at the best of times, but if you don’t know that it’s coming, it can be particularly irritating. So, best that you know when it’s coming then, and we’re here to help.

The good news for those of us in Cape Town is that some degree of loadshedding is often mitigated by our spare generation capacity (the hydroelectric unit up at Steenbras).

To see what stage the local loadshedding is on, check this page.

To check for who your supplier is, look at the map here.

If you’re not in one of the cheerfully coloured areas, you’re an Eskom customer, and you should go here to view the appropriate schedules.

If you are in one of the cheerfully coloured areas, look at which one and then head here to see when you’re going to be cut off.

And that’s it. Loadshedding isn’t an exact science, so no promises made as to what might actually happen on the ground at the time, but this is as good a guideline as you’re going to get.

Loadshedding should last for about 2½ hours a pop. If it goes on much longer than that something has gone wrong (or it wasn’t loadshedding in the first place – other electrical problems are also possible), talk to the City on 0860 103 089 or Eskom on 086 00 37566.

Or do some online shouty stuff:

Don’t forget to not tell them where you live. That’s always helps.

Let’s get the good news out of the way first:

For the 2018 season, PicknPay’s mince pies are both nicer and cheaper than Woolworths’ offerings. Fact.

I know. I was also surprised (at least on the taste bit).

It’s just that there’s something just a little bit concerning about the packaging.

See, if just below the product description, it said, in a nice curly font:

Our fruit mince pie has been made from spicy fruit mince and a shortcrust butter flavoured sweet pastry.

all would be good. And it does almost say that. It’s the four words in the middle that ruin it for me. 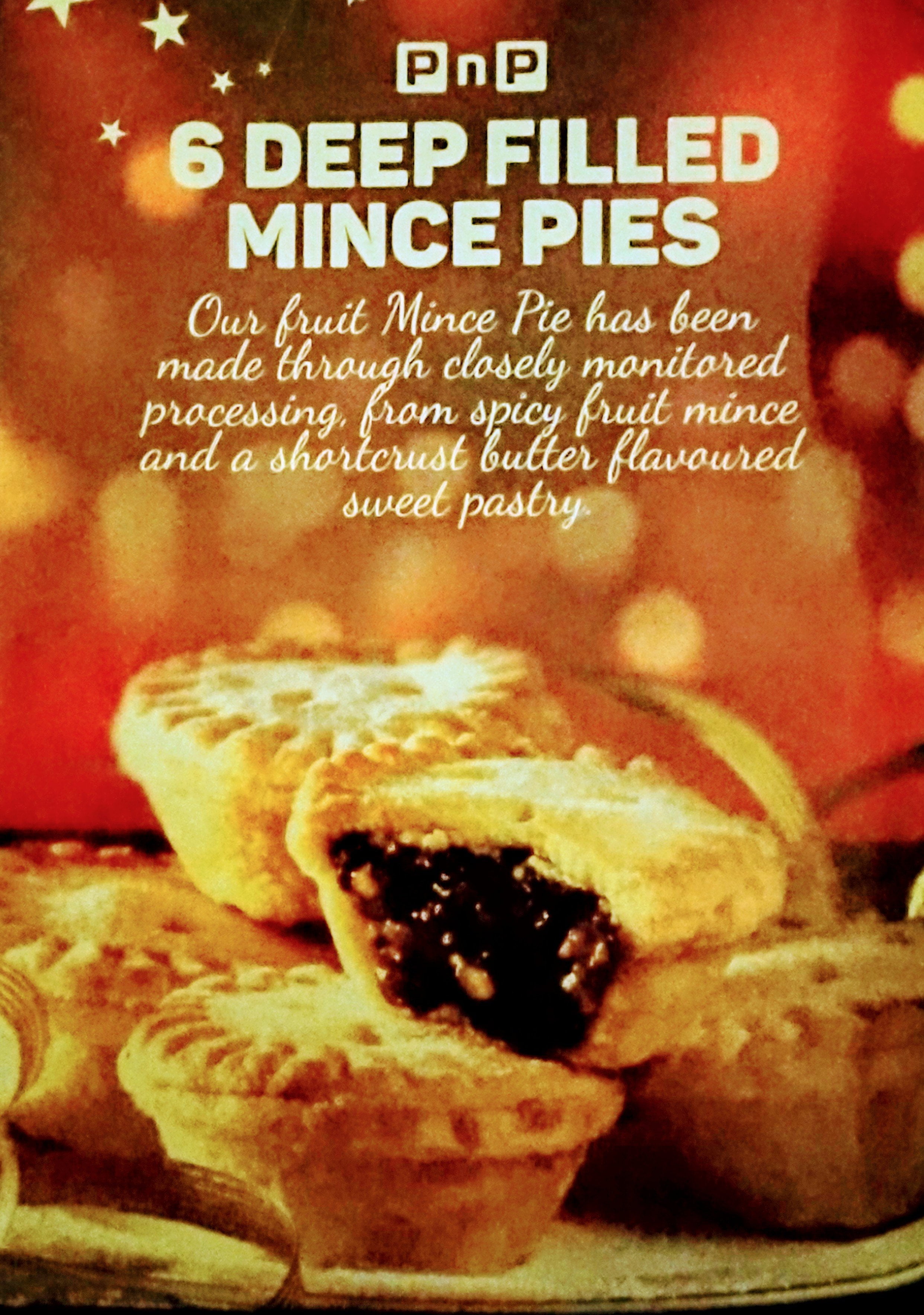 Our fruit mince pie has been made through closely monitored processing from spicy fruit mince and a shortcrust butter flavoured sweet pastry.

Because sure, I want my food to be under constant scrutiny while it’s being processed, but I don’t really want to think about it: especially not in nice curly font on the front of the box. It makes me think that there’s a good reason that you have to shout it out so loud.

If you’re going to add those four words somewhere as prominent as that, I’m instinctively mentally adding four more of my own underneath:

Our fruit mince pie has been made through closely monitored processing from spicy fruit mince and a shortcrust butter flavoured sweet pastry.

Was 2017 a really bad year for PicknPay mince pies, then?

I don’t know, but now I’m certainly imagining that it must have been. It’s rather off-putting. Was it glass, poison, workers’ hair, bits of metal or maybe even water buffalo that might have slipped into my Christmas snack while the processing was not being closely monitored? Did someone not read the N and sent out batch upon batch of Mice Pie?
And why doesn’t every PicknPay product have that “through closely monitored processing” line on the front?

Does that mean that their processing is not being closely monitored? Eww.

Actually, I have no idea. Fortunately, the 2018 vintage of PicknPay mince pie is so tasty that I’m almost able to completely overlook the dodgy inference on the front of the box.