Too little too late? Possibly. Probably, even. But the commitment and the sheer effort last night was a proper Sheffield United performance, not one of a team seemingly doomed to relegation.
Our defeating both Aston Villa and the best efforts of the officials and their laughable red cardism was wonderful to watch (if slightly stressful at the end).

What a goal. What a performance.
And a Sheffield Double as Wendy lost to relegation rivals Toytown in the last minute.

Finally! A win! And a well-deserved one at that.

I’ve been doing some rudimentary calculations and I reckon that we can still win the league.

With the municipal elections just 4 weeks away, the ANC have launched a new tactic to confuse the local electorate into voting (presumably) for them. A couple of weeks ago, Deputy President Kgalema Motlanthe admitted that the party had no chance of winning the Cape Town Municipality from the incumbent DA: 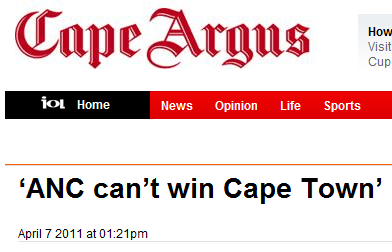 At first, I thought that this was either reverse psychology or actually a strange moment of honesty from a politician. Although, I have to say that Motlanthe has always struck me as being a fairly honest sort of bloke, which is pretty unusual for someone in that profession.

Anyway, apparently he was wrong because 2 weeks on, the “ANC can win Cape Town” according to his boss – and indeed everybody’s boss – Jacob Zuma: 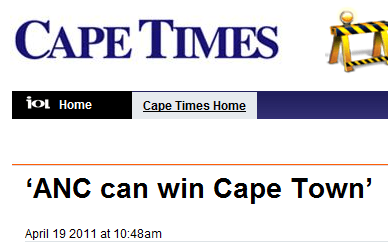 Bewildered? Of course you are. So allow me to explain.

Quite how two leading members of the same political party can publicly differ so much over a simple issue is beyond me. And of course, they’re both correct. Mathematically, the ANC can win Cape Town; realistically (barring any bombshells in the next couple of weeks), they probably can’t. Does anyone actually need to be told this? Probably not.

Are potential voters likely to be swayed by this sort of apparent difference of opinion? Probably only as much as they are by the overblown promises of either of the main parties in the election race.

Meanwhile, if any local political organisation can come up with a plan to stop my neighbours dogs barking at 5 o’clock every single sodding morning, then they can have my vote instantly and without question, whether they think they can win in Cape Town or not.

I don’t often blog about football considering how much of my time it occupies, so you’ll surely forgive me this (or, more likely, you have already stopped reading).

While the world was watching the Barca players and their referee overcoming Arsenal at the Nou Camp Circus, there was huge joy and no small amount of mild relief Chez 6000 as my beloved Sheffield United ended a winless streak of 14 league games, a spell during which they have only taken 4 points from a  possible 42, by beating Nottingham Florist at Beautiful DownTown Bramall Lane last night. This was obviously a great boost to the Blades, but was marred by Bafana Bafana’s Kagisho Dikgacoi scoring the winner for Crystal Palace against Cardiff, thus meaning that we made absolutely no ground on the London club whatsoever.

It’s surely onward and upward from here: mainly because we can’t go back in time and we can’t go much further down at the moment and Watford must surely be quaking in their collective yellow boots as the Mighty Red and White Machine rolls into Hertfordshire for Saturday’s High Noon (Brazilian time) showdown.