I got given this by my 2½ year old daughter this morning: Look, to be honest, the painting isn’t up to much, but on the plus side, her typing is really coming along (despite missing the apostrophe).
I also received a butterfly-shaped Valentine cookie which I haven’t dared to eat yet.

I’d happily trade it all in for another hug, though.

Damn. Don’t you hate it when good ideas come along just too late?

This one came to my attention about 7 weeks too late for Valentine’s Day this year, but I can only imagine how overwhelmed Mrs 6000 will be to find that I have arranged her funeral for her as a romantic gift next February. 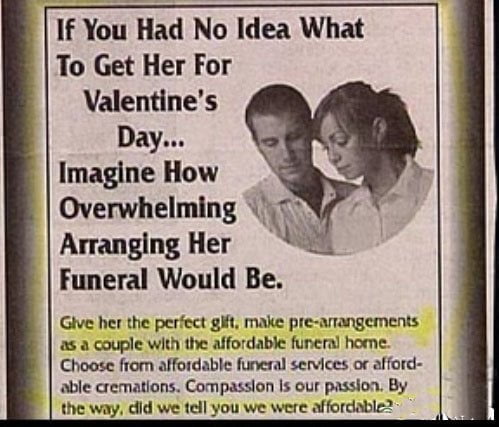 The brilliant bit about this gift is that once you’ve sorted it all out for the wonderful woman in your life, you will never have to get her another Valentine’s Day gift again – because you definitely won’t be together anymore. Did you enjoy your Valentines day?

If you’re in the USA (and a fair number of accidental tourists to 6000 miles… are) then your lovely bunch of roses probably came from Columbia or Ecuador and were grown and cut for the love of your life by exploited workers. Still, it’s better than other Columbian crops imported into the USA, I guess. Fairness in Flowers is an organisation campaigning for better rights for cut flower workers. Their page is worth a read.

Human rights organisations and campaigners do a great (if highly subjective) job of alerting us to these issues. However, I can’t help but think that their position is undermined by the odd stupid campaign thrown in, seemingly because some organisations have nothing better to do.

This week was pretty quiet, so Shami Chakrabarti, director of Liberty, dived in to the row over the Mosquito device, dramatically calling it:

a sonic weapon directed against children and young people

and arguing that its use constitutes:

Quite a soundbite over a device whose effect is compared to “the level of irritation of going downstairs without turning off your alarm clock – you can ignore it for a couple of minutes but after five minutes it starts to get annoying.”
Woo. That’s infringing my right to watch Vuyo Mbuli in peace right there.

Evidently, the week in which Garry Newlove was kicked to death in front of his family by a gang of teenagers after confronting them when they vandalised his car, was a little busier for Shami, despite the fact that the anti-social mob had long been causing a “disproportionate interference” with his and his family’s right to a private life.

Shami also missed the death of Mi Gao Huang Chen, beaten to death by a group of teenagers who regularly gathered outside and vandalised his takeaway shop.

I’m well aware that these incidents are rare and far more serious than the usual issue of chavs outside the local chippy, but they are the product of an escalation of that problem – one that can be prevented by using the Mosquito. For example, a South Wales shopkeeper says:

The problem we have is large gangs of youths that congregate in the entrance way – hanging around, drinking, and I know other narcotics can be involved.
It ranges from them being annoying to intimidating customers and staff to outright physical assault.
One customer has been mugged for their alcohol, and in the time I have been here there have been three occasions where someone has tried to stab me.
The problem comes and goes. When it gets bad it generally lasts for three of four weeks.
At certain times before we counted over 40 people outside the shop.

The Mosquito has reduced the problem massively. It still happens, but nowhere near the same amount. It has had a positive effect. Customers have praised us for it.

or how about this:

Gurmes Chatta, 54, runs a general dealers on Chiswick Road, Hylton Castle, an area where teenagers regularly congregate.
In recent years he has seen damage done to his shop by yobs kicking footballs and has suffered verbal abuse. But now Mr Chatta says the problems have virtually been wiped out by his Mosquito device.

I’m also well aware that more needs to be done to sort out the problem of anti-social teenage behaviour than just moving them on from trouble hotspots. But hey, it’s not a bad start.
I think Shami has missed the point. Jumping on the trendy bandwagon of criticising the Mosquito while conveniently ignoring the rights of the thousands of people whose lives are made a misery by anti-social teenage gangs is blinkered. That sort of thing puts me right off listening to anything else her lefty group has to say.
And her doing it in an irritating high pitched whine which annoys people of all ages is somewhat hypocritical.

No. Don’t ban the Mosquito. Use it wisely as part of a bigger scheme to get teenagers off the streets.

And send me one so I can enjoy the footy in peace over the weekend.
Do you perhaps have one that will deter wives from wandering in front of the screen just as a goal goes in?
That would also help.