Lots of interesting stuff* around today, so rather than lots of little posts, one all-encompassing behemoth containing all you need to know.

BEWARE THE MONKEY MAN! A baboon has been kicked out of his troop near Bredasdorp, according to Cape Agulhas Municipality:

Please note that a male baboon was kicked out of his troop and is roaming the edges of Bredasdorp town. He may enter the residential areas and the public is warned to be careful and not approach or agitate the baboon. The Municipality is working with Cape Nature to resolve the matter.

Which is all well and good (unless he breaks into your place and poos on the kitchen counter again), but if you run the Afrikaans version through Google Translate, you get this:

There is a monkey man roaming the town limits of Bredasdorp and it is feared that he moved into the neighbourhoods. He appears by his pack kicked. The public is warned not to confront the monkey man and stay away from him.

And I think that’s the way that all official CAM press announcements should be made from now on.

BLOODY ELK! A gang of angry drunken elk barred a man from entering his home in suburban Stockholm on Tuesday, leaving the frightened homeowner no choice but to call police for help.

“They can be really dangerous. They become fearless. Instead of backing away when a person approaches, they move toward you. They may even take a run at you.” The incident involved four adult elk and one calf, Näverberg explained, all of whom were intoxicated after having eaten fermented apples that had fallen from the homeowner’s apple tree.

Worth clicking through just for the photo.

LONDON SKYSCRAPER IS SOLAR DEATH RAY! London’s Walkie-Talkie building’s mirrored frontage is focusing the sun’s rays onto the street below and melting cars and bikes. Seriously. 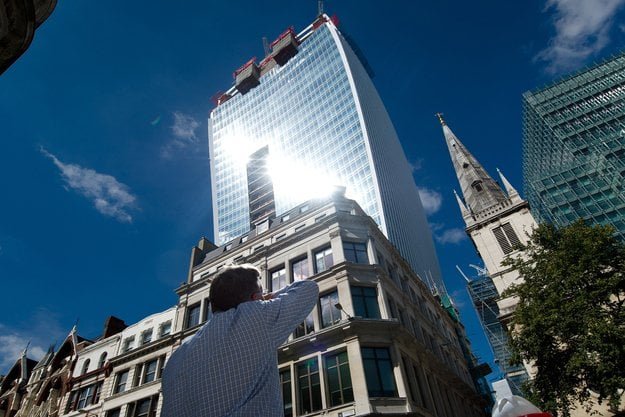 On the plus side, it seems to keep the elks away, and they could makes some cash from it:

Dr James Keaveney of the University of Durham’s Atomic and Molecular Physics department said it appeared to be an inherent flaw in the building: “It’s a concave shape so it’s going to have a focussing [sic] effect on the light that is reflected from it.
There’s a power station in Spain that works on this principle. They have an array of mirrors that focusses [sic] light into a central pillar –?if it’s 60°C you could get solar panels and get some energy out of it.”

UPDATE: Some funny tweets on this here.

FIT FOR A KING! Well, a Prince anyway. A Saudi Prince has bought a 50% stake in The Mighty Red And White Wizzzzzzzaaaaaards:

A member of Saudi Arabia’s royal family, Prince Abdullah bin Mosaad bin Abdulaziz Al Saud, has bought a 50 per cent stake in Sheffield United’s parent company for £1, The Star can reveal.
In return the 47-year-old has agreed to provide “substantial new capital” designed to help the club return to the Premier League “as quickly as possible.”
Plc chairman Kevin McCabe refused to reveal the exact sums of money involved but recently described them as being a potential “game-changer.’

What could possibly go wrong? Premiership Champions by 2016*.