It seems that there is an element of denial in the national psyche over here after South Africa lost in the semi-final of the ICC Champions Trophy to England yesterday. Now, I don’t want to harp on about this, although the self-flagellation amongst the locals shows no sign of abating, so it’s obviously still relevant (and raw).

But there was this on the IOL news website: 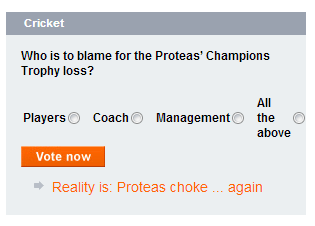 Try, if you can, to ignore the formatting issues and look at those options. Because the blame game must be played.

Might I suggest a fifth option though (even though there’s blatantly not even room for that fourth one)?

Maybe it wasn’t the best SA cricket performance ever, but then, maybe they weren’t actually allowed to play well. I mean, perish the thought that the opposition were actually better than them. We could never admit that though, could we?

Come to think of it, where is the story here? The Proteas lost to a better team, a team that is above them in the ICC rankings, a team that played better cricket than they did yesterday. ‘Choking’ (in this context, rather than a buxom celebrity cook context) is when you lose a game that you were expected to win – or you lose from a winning position. That didn’t happen here.

Oh – and Dale Steyn was injured, you say? – well, we’ll be sure to make a footnote in the history books for you.

After the whole Andrew Strauss/Fatty Smith controversy, the ICC Champions Trophy is rapidly sinking from “poor sportsmanship” to “blatant cheating”: 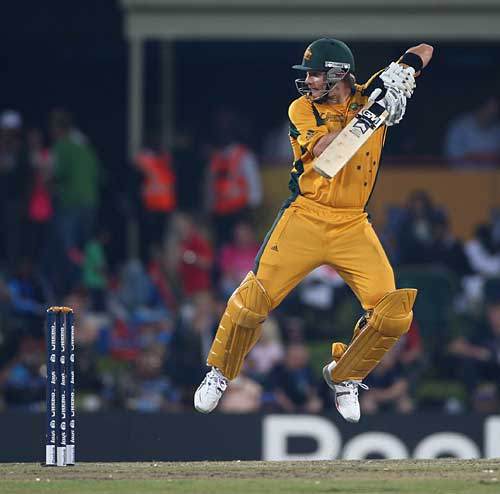 It’s about time that post-match blogging evidence was taken into account.

Following England’s magnificent ICC Champions Trophy victory over South Africa in Centuwiwon last night, they find themselves in the semi-finals while the hosts find themselves dumped out of the competition. And I find myself with a bucketload of upset Saffas all over my England-supporting back.
Which is actually a bit unfair.

I will (and do) support South Africa at any sporting occasion unless they are playing England. And I feel that that is a more than reasonable way of going about things. The argument that “if you’re going to live here, you must support South Africa full stop” just doesn’t cut it.
After all, if you were going overseas, would you suddenly stop supporting the Boks?  Of course not.

And I have to take the rough with the smooth. And there’s been a lot of rough since I moved over here. The 2007 Rugby World Cup would be one notable bit of rough. But while I was unhappy that England lost, I was at least magnanimous in defeat. Mostly, anyway. Flying the flag on my car this morning

My only gripe about SA sport and SA supporters is the hint of arrogance that has crept in since their recent successes in cricket and rugby. It’s not pleasant to see and it’s unfortunate. The Boks “Justice 4” campaign, when they tried to suggest that they were bigger than the game, is a good example. It detracts from achievements on the field and they were lucky to get away as lightly as they did.

The arrogance comes when teams and fans get used to winning. You see it in sport, you see it in politics, you see it in business.
It makes losing harder to take. But that’s still no excuse.
Last night, the world’s number one ODI team was wholly outplayed by a spirited England side. Beaten fair and square. Anyone claiming otherwise is nothing more than a sore loser.