You either love him or you hate him: the current marmite of UK politics is PM-contender Boris Johnson. But this isn’t supposed to be the preamble to a post which will divide my readership, it’s merely a means to share this quote he made in 2013, and which is back in the news: 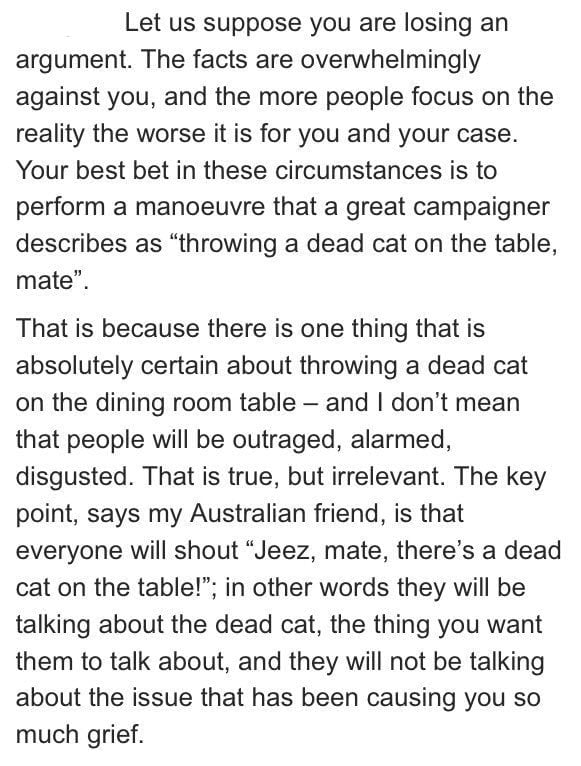 When you are in trouble, diversionary tactics can be a useful way of escaping immediate censure. In politics is almost routine, because all you need is a suitably foolish audience (and god knows that the voting public are pretty much that).

Recent (just before the general election) local case in point:

The ANC’s integrity committee is set to look at the processes around candidate lists.

Duarte revealed this in a post-NEC meeting briefing earlier on Tuesday.

The move follows reports that the ANC’s candidate lists have been tampered with.

Serious stuff. This is basically who gets to sit in Parliament for the next 5 years if the ANC get enough votes (which they were obviously always going to). And it seems like the process may have been interfered with?

Let us suppose you are losing an argument. The facts are overwhelmingly against you, and the more people focus on the reality, the worse it is for you and your case.

What happened next was that poison dwarf Duarte flung a dead cat onto the table – and the eager reporters present were… well… perfectly outraged, alarmed, disgusted.

But the rest of the briefing on what the ANC’s top decision-making body had discussed was overshadowed by Duarte’s public altercation with a journalist.

During a briefing with reporters at Luthuli House, Duarte described Maseko as arrogant, saying he thought of himself as “lord of the media” instead of the mere journalist that he is.

And the newspapers were full of that instead of whether or not the candidate lists of the ruling party had been compromised.

Thing is, anyone with half a brain will see directly through your flimsy tactic and completely ignore it, so Duarte was clever with her perceived “attack” on Maseko: playing for a defensive, emotional response from his colleagues present. And getting it. Because was the ANC candidate list unduly influenced from within the party? Well, we’ll never know, because the rest of the briefing (and consequently the rest of the reports about the briefing) was only about what Jessie said to Samkele.

Boris would be very proud.