Off the coast of Cape Town, South Africa, the sudden abandonment of more than 1,700 Cape cormorant chicks has sparked the largest seabird rescue mission the country has seen in 20 years.

That larger seabird rescue mission being the response to the MV Treasure disaster back in 2000.

Look, there’s a lot going on in South Africa right now: politrix, lockdowns, a virus etc etc. but, being someone who generally has his finger on some sort of pulse, I’m surprised that I haven’t heard more about this locally. So I’m glad that at least the BBC has stepped in with a attention-raising photo essay.

On 11 January, ranger Andile Mdluli was conducting a regular patrol on Robben Island, most famous as the place where Nelson Mandela was imprisoned, when he noticed that almost all of the island’s thousands of adult Cape cormorants had disappeared. Unprotected, their chicks were being picked off by predators in their nests.

“It was just carnage, with kelp gulls and ibises coming for these chicks,” says Lauren Waller, a seabird scientist at Sanccob.

I was on Robben Island just over 100 days ago and I can vouch for the ferocity – and numbers – of gulls and ibises. Especially the ibises. Literally thousands of nasty, ugly, scary African Sacred Ibis (Threskiornis aethiopicus). I’m pretty sure that Robben Island is the Sacred Ibis reservoir for the whole of South Africa. And it’s been spilling over for a while now.

It’s important that these chicks make it to adulthood, because the Cape Cormorant is not doing well on the numbers front:

Cormorants are “as endangered as African penguins”, says Ms Ludynia, but “because they’re always in large flocks people don’t realise”.

…and they’re not cute and waddley either, both of which always help with gaining funding and awareness when you’re dying out. 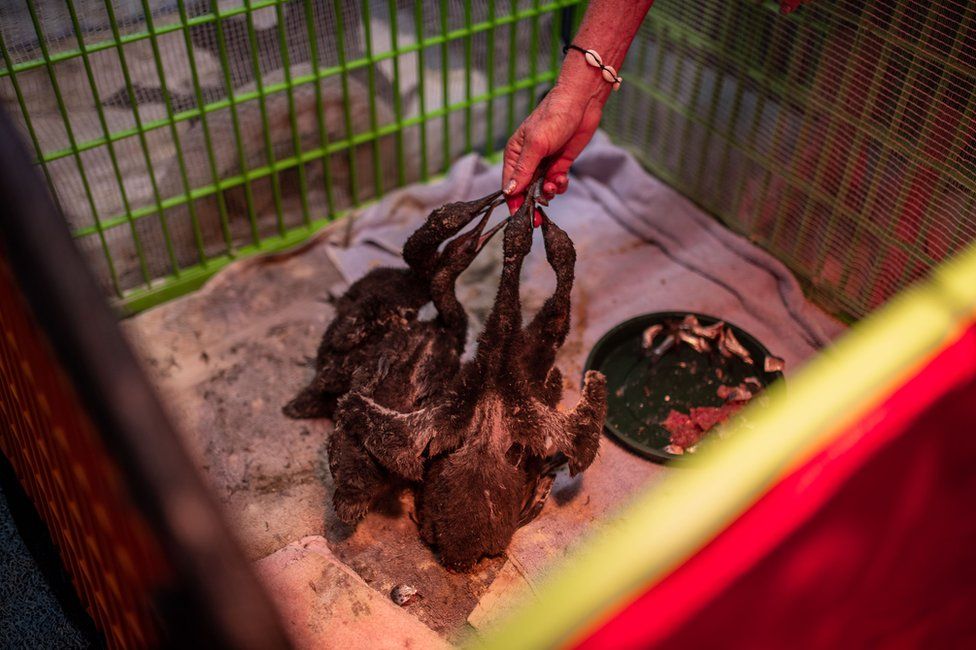 Anyway, on that note (and given that the chicks will get through 20 tonnes of sardines in the next couple of months), wherever you are in the world, if you want to help out with SANCCOB’s costs, here’s the page you need to go to.

You can even select for your funding to go directly to the chicks in question. Do it.

Thanks for the link, Switzerland and Sheffield