[Update: What happened next? See this post for details.] 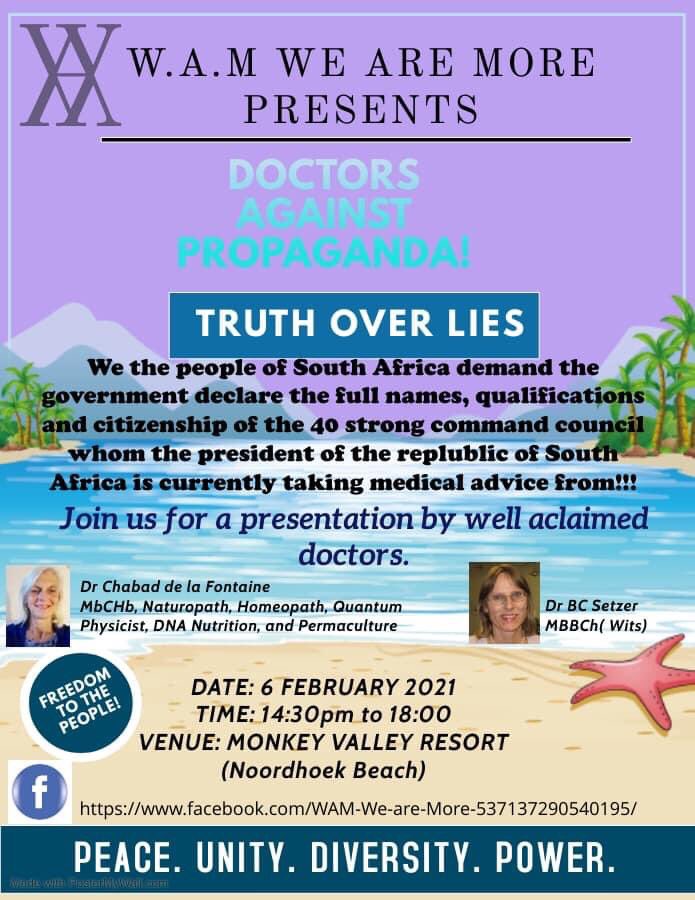 Yes: THE ENGLISH IS TERRIBLE: a split infinitive, a missing hyphen, a couple of AWOL commas and an embarrassing speling eror.

“Dr” Chabad (de Jaeger) de la Fontaine was the lady who became briefly and locally famous after the Muizenberg beach protests last week. Here she is:

…making claims that she is:

“…a very highly skilled medical doctor, as well as a virologist, immunologist and quantum physicist, working with parasites that they call viruses.”

Look, we’ve all been there, but this is really is no way to publicly describe your colleagues.

Still, it’s an impressive array of qualifications and specialisations, and one that – if you do a bit of background reading on “Dr” Chabad (de Jaeger) de la Fontaine – seems to vary depending on the day of the week and the direction of the breeze.

The flyer above (as you can read) suggests her qualifications and specialties as:

…while LinkedIn says she is a:

and she is also the owner of “Aqua Resonance Technology Ltd”, which according to the CIPC, doesn’t exist.

But elsewhere, we learn that she is also “Founding Member (and Human Intelligence Self- Mastery Consultant/Coach/Trainer) @ Changing Lifestyles (Pty) Ltd”, which according to the CIPC, er… also  doesn’t exist.

And she’s also been “Executive Assistant to CEO @ AFRO SYNERGY TOURS (Pty) Ltd”, which according to the CIPC… ag… look, you can probably guess.

Still, maybe it’s a quantum physics thing and these enterprises simply exist in a parallel universe, reality or timeline. Or maybe the CIPC has got it nailed and they don’t exist full stop.

and is a networker in advertising and promotional products: 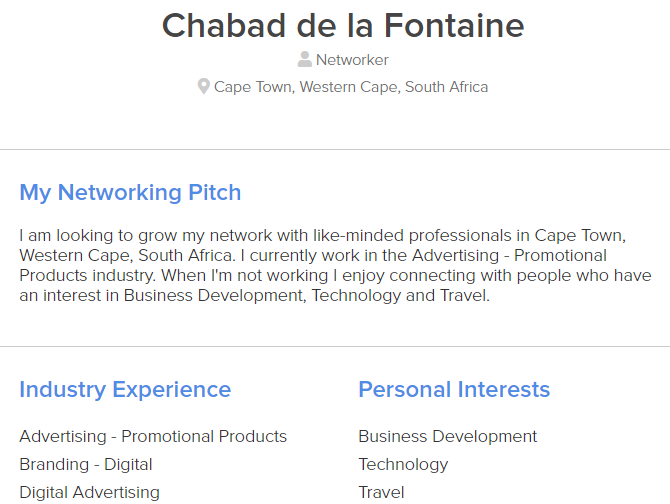 I mean, I find it a bit strange that after her weirdly capitalised MbCHb, which must have taken an absolute minimum of six years to achieve, she has never chosen to mention it before anywhere that I can find, but I’m sure that’s just an oversight.

In fact, the highest qualification that I can find on any of her myriad profiles suggests that she has a Masters degree, listed thus:

Three of my four PhDs in apparently randomly contrived subjects also came from Private Tutor, so that all seems legit and completely above board.

Elsewhere on that page, she claims to have spent 16 months as a:

which seems an awful long time to be doing senior research at scientific research on something that doesn’t exist. Especially when you’re a qualified medical doctor.

In fact, that particular profile (written at the end of 2015) doesn’t actually mention that she is a qualified medical doctor at all, but I’m sure that’s just an oversight. It does tell us that she worked to try and get a new modular furniture system business up and running, and has a diploma in Event Management from Damelin College in 1994 though, which pretty much adds up to about the same thing, I guess.

A minor point: The HPCSA doesn’t list her as a medical doctor either. Odd.
But I’m sure that’s just an oversight.

Anyway, tomorrow, as you will see, she’d like us to spend 3½ hours with her beyond the lentil curtain as she demands “TRUTH OVER LIES”, and transparency around the qualifications of those “advising the president of the replublic [sic] of South Africa”.

Yes. I’m all for clarity around the qualifications of these so-called ‘experts’ telling us how we should be living our lives.

Still, I won’t be going.