With apologies to Michael Stipe and REM:

Flying out of Cape Town tonight – into the snowy UK – looking forward to the trip, but not so happy about leaving home and family behind.

It’s turned into another scorcher in Cape Town today, with the mercury (actually, I use an electronic digital system, but you know what I mean) peaking at just under 30°C. Compare that with Oslo where the mercury is still sensibly hiding under the bedclothes and “peaked” at -9°C, but with a “feels like” reading of -13°C.
All of which leads me think that I am going to freeze my nuts off while I’m over there. But that’s fine, because I’m going to have a damn good time in the snow as well.
Although, for safety’s sake, I won’t be playing snowballs in the mountains. 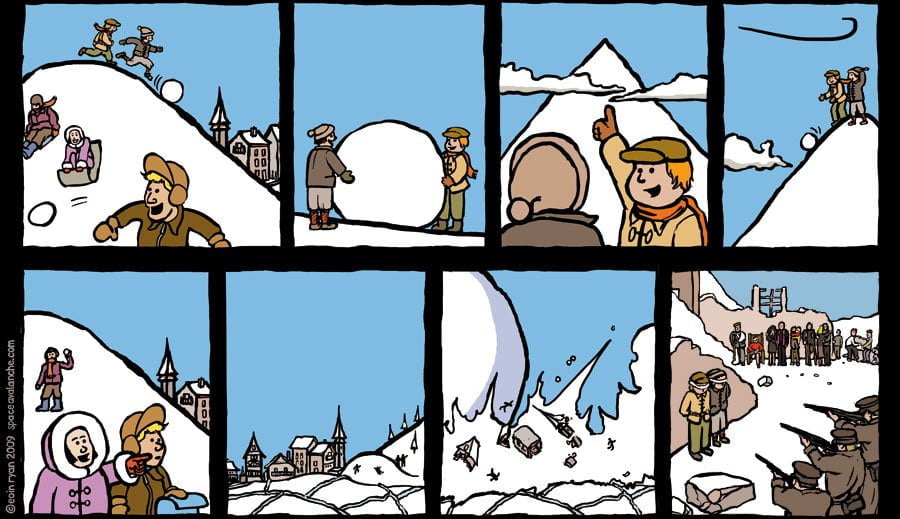 This is from the wonderful SpaceAvalanche.com, which is well worth a visit if you have a bit of a dark sense of humour (like I do) or a few hours to while away (like I don’t).

This time next month, I’ll be boarding a large jet-engined aircraft – vuvuzela in hand – for my trip to Europe on The Last Hurrah 2010 tour. It therefore seems fitting that we should indulge ourselves with a little more a-ha goodness. This one is from their 1990 album East of the Sun, West of the Moon and it’s called I Call Your Name.

A great song that made it to number 45 in the French singles chart. Because they have no taste.

I should be at Grand West watching Crowded House tonight, but I’m not feeling great and the kids are still recovering from ear and sinus infections respectively, so I’ve stayed home to look after them. And me.
In an ironic twist of fate, Mrs 6000 took the babysitter along to the concert.

Nothing, however, will stop me from making an appearance at the Oslo Spektrum in a few weeks time. I could be oozing blood from every orifice (very African) and I’d still be there singing along.
It would be nice to just be healthy that night, though.

File under: titles which sounded good at the time, Blog post

BA have asked me very nicely if I’d like to pay R225 (their version of £20, with the Rand’s current stupidly high levels) for the privilege of choosing my seat for my flight to London next month. And they also offered me the chance to pay the same amount again to choose my seat on the flight back.
Having long legs and being sat on a plane for 12 hours is no fun (although it’s really cool the rest of the time). If you have young kids, you get one of those bulkhead seats, which is better; but what the journey giveth, the journey taketh away, because then you’re travelling with young kids. I covered the trials and tribulations of that about a year ago. Good post, that.

I was almost tempted with BA’s generous offer until I found out that my R225 wouldn’t actually allow me to choose a decent – and by “decent”, I mean “exit row” – seat.
No – I have to cough up £50 each way for that. And that’s a lot of money. Especially when you convert it into a universal currency that everyone can understand: beer. I can’t actually book those seats until 14 days before I fly, but working on BA’s current exchange rate, £50 = R562.50. And at bottle store prices, that’s more than 102 bottles of Carling Black Label.

So, no. I’ll take my chances with the normal 24 hour online check in and I’ll settle for an aisle seat. Virtually any aisle seat. And if I don’t get an aisle seat and I have a dreadful flight, then I’ll reconsider booking an aisle seat for the return journey for £20.

And I have a good day to look forward to when I arrive. Tickets are in the process of being acquired for the undisputed Match of that Day, Bristol City versus Sheffield United, which I am very excited about and which means my journey from Cape Town to Sheffield will take about 26 hours. Plus check-in time. Plus getting to the airport early so the kids can come along and see me through the departure gate.
Bring forth those 102 bottles of Carling Black Label. And a couple of Red Bulls as well.

In other news (and somewhat off-topic), please take the time to look at this:
5 Things That Have Been Found In Fat People’s Skin Folds

Not all mine, either.

Firstly, a-ha’s appearance to sign copies of their 73rd greatest hits album: 25:The Very Best Of a-ha at Oxford Street’s HMV, which I couldn’t attend because Oxford Street is in London and I am in Cape Town. Initially, this seemed like a very bad thing, but it wasn’t really because I got to go round a brewery. There are no breweries on Oxford Street in London. (I haven’t verified this fact in any way, but it seems a fairly good bet). Photo from HMV get closer

But as I say, thanks to the Ogilvy and the champion taste of Carling Black Label, I was invited on a Brewery Tour and Tasting – the beer, not the brewery – which was fun, interesting, informative and quite staggering when it came to sheer size and numbers. They make a lot of beer in Newlands. A lot. More than 1,000,000 litres a day.
And that, as I may have mentioned, is a lot.

The official photographs, from the official photographer are yet to come (and we’ll surely revisit this when they do), but I did knock a few pics off with my trusty 8MP X10 camera.
Keen mathematicians amongst you will have calculated that that amounts to a whole 3,000,000 pixels more than an iPhone 4, of course. Loving all these 0’s this evening. It’s called a bottle filler and it spins around rather fast.
The whole bottling plant was hugely impressive (and rather noisy) as this short collection of video clips proves. It was a bit like watching the Discovery Channel in person. Except that there were no repeats.
The rest of the photos are here – blurring slightly as the day progressed. I wonder why.