Grand Emperor of the Western Cape, Helen Zille has been talking up a storm after a police briefing on World Cup security. She warned of the dangers of sensationalist media and their attempts to stoke up negative sentiment about the country and the tournament.
Well said, Helen. We warned you about that over 3 months ago.

“There are a lot of journalists who want sensational stories in the run-up to the World Cup. Be very careful not to be caught off-guard with a sensational quote,” she said.
Zille said it was important not to “pump up” international fears, and mentioned the recent attack on the Togolese football team during the Confederations Cup in Angola as an example of how perceptions could go wrong.
“They don’t differentiate between countries,” she said, adding that she herself had been on the receiving end of journalists “trying to squeeze alarming statements” out of her.

While this is obviously of concern, those journalists should have known better than to mess with Zille. Even when squeezed really tightly, all that comes out is rhetoric; stuff like “ANC”, “totally unacceptable”, “President Zuma” & “morally questionable” with the odd transitional phrase thrown in so it all makes sense.
To her, anyway.

After savaging the media, she then turned her attention to the equally menacing vuvuzela.

“The vuvuzela is great fun until you sit and hear thousands,” she said.
“You need to warn people. You need to have earplugs on sale at the stadium.”

“It is a serious point I am making, I am not being frivolous.”

Oh…  right.
Well, that’s nonsense.
One vuvuzela is annoying. Thousands of them honking together like an army of mad geese is just great.

Sense has finally prevailed and FIFA has made its judgement on the ‘noisy’ vuvuzela issue which has been upsetting people who don’t want their South African football served with a side order of atmosphere.

FIFA have no plans to ban or stop fans from blowing noisy vuvuzelas at the Confederations Cup or next June when South Africa host the 2010 World Cup finals.
That was the word from FIFA president Sepp Blatter speaking at a special media briefing ahead of the crunch Confederations Cup Group A clash between Bafana and New Zealand at the Royal Bafokeng Stadium on Wednesday night.

In reply to a fed up journalist who complained about the “terrible noise” that the unique South African vuvuzelas make and suggested that they should be banned, the FIFA president smiled and said he agreed that the “trumpet” used by local fans was a noisy instrument.
“But,” he added, “That is what African and South Africa football is all about – noise, excitement, dancing, shouting and enjoyment. This is a celebration.”

Wow. Blatter talking complete sense. Incredible. He needs to chat to Julius. They can learn together. 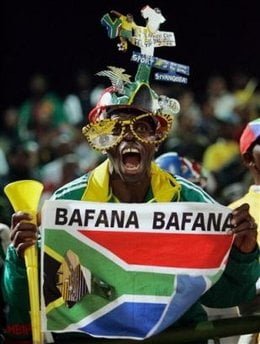 Of course, we still have some locals in denial over the actual World Cup – still under the impression that a Plan B or Plan C will come into effect and move it to Australia or England – so I think there may be some difficulties with getting the “Vuvuzelas are OK” message across.
But as I said in my earlier post on this issue, the vuvuzela is set to become the trademark of the World Cup next year. They were there when SA was awarded to World Cup in Zurich back in May 2004  and they will be blowing all the way to the final in July next year.

So if you don’t like them: sorry for you.

* along with a huge amount of over-reporting of any negative issue with a possible sensationalist angle.