I tried to understand what a UEFA Nations League is and how it worked.

Firstly, I went to the UEFA website: horse’s mouth and all that. And then, when my brain exploded thanks to lines like this:

I asked online for assistance, which came in the form of a link from The Guru. Thanks, The Guru.

Because yes, Football365 seem to have done a good job in attempting to simplify a rather complex format. And am I alone in thinking that UEFA might actually be onto something here? It actually looks quite good.

And there’s more great news for me too: Supersport – who failed to secure the rights for the English League Cup or the Championship – have managed to scrape some cash together to buy some UEFA Nations League goodness.

Tonight kicks off (quite literally) with the following fixtures:

With Mrs 6000 getting up early for Colin each and every morning, I do the late shift. The late shift actually isn’t too bad – all it involves is not putting the dog to bed too early, because then the dog wakes up too early. Hardly revolutionary stuff. It doesn’t always work, and in fact last night it didn’t work at all and so we’re all a bit knackered this morning.

I was actually quite looking forward to yesterday evening’s late shift, because in an effort to keep me awake, I had pre-determined that I would watch England’s European Championship qualifier against Switzerland. I’m aware that if it was to be anything like England’s friendly against Norway last week, I may have struggled to combat the extreme soporific forces, but I had high hopes and they were only to be dashed by SuperSport, and not by another dull England performance. Because SuperSport weren’t showing it.

Previously, I would have raged a bit and then wondered what was going on and then raged further, more at frustration of not knowing why it wasn’t on, rather than the actual fact that it wasn’t on. But these days, we have twitter, and a quick look at SuperSport’s timeline told me that I wasn’t the only one wondering why we were missing out: 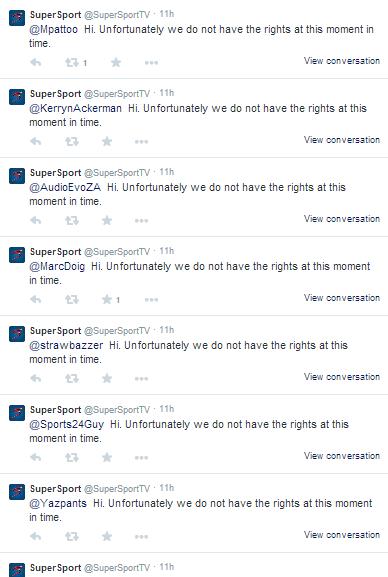 And let’s not be all South Africa-centric here – this is for the whole of Africa, including the footballing hubs of Nigeria and other countries in Africa that like to watch football. Beeg audience.
So – are they trying to get the rights? Will they get the rights? Er…

@strawbazzer Can’t confirm anything yet.

Once this week’s matches are over with, we have about 4 weeks before the next international break, which will feature more European Championship qualifiers, including England against THE MIGHTY San Marino. Hopefully, SuperSport will have sorted out this rights issue before then: after all, we’re paying quite a lot of money to be able to watch these sorts of things (and let’s face it, there’s not a huge amount of other stuff on DSTV that’s worth the subscription).

Meanwhile, Afcon qualification takes over on Wednesday evening. And although SuperSport do have the rights for that, I’m going to to go an watch Bafana Bafana v Nigeria at the Cape Town Stadium, simply because I can.