It is, as you may have gathered from the title above, Municipal Election day in South Africa. A great day to avoid social media. (OK, that’s every day but especially so today.)

But today marks another opportunity to choose the least worst party to run things in your locality for the next 5 years. I say “least worst”, because the best performing municipality in the entire country (and it was Cape Agulhas, nogal!!) scored just 65/100 on a local news site’s ranking system. Nationally, the average score was 45.

Room for improvement? Definitely. But who’s going to be able to do it?

Well, love them or hate them (and remembering that we don’t use social media as any sort of barometer for anything around politics, kids), there’s clear evidence that the DA run municipalities better than other parties run municipalities. 8 of the top 10 and 15 of the top 20 here are controlled by the DA, and that for a party that only runs 25 of the county’s 278 municipalities.

Are they perfect? Far from it.
Would they make a good national governing party? I’m not convinced.
Are they the best party for running municipalities? Yes. Yes, they are. Clearly.

I’m not a DA member. I’m not even allowed to vote.
I’m only allowed to pay my taxes. Then other people get to decide what happens to them.
I’d just like them used well.

The fact is that what is – somewhat obviously – the best choice to run your local municipality can only score 65% for doing just that, is a sad indictment on just how poor out political choices are at the moment.

Still, you should do YOUR research and you should vote for whomever you believe will run YOUR ward best (or least worst), and not be swayed by promises that can’t be kept by municipal councils – even if that party sweeps to a landslide victory in your ward – you’re not going to end lockdown or enable Western Cape secession. Look out for promises that they know they’ll never have to keep.

Oh, and obviously avoid anything or anyone who has anything to do with Patricia de Lille.
That’s just common sense.

Oh joy! The Municipal Elections 2016 to be exact.

And, for just about the first time since 1994, we could be looking at some big changes. 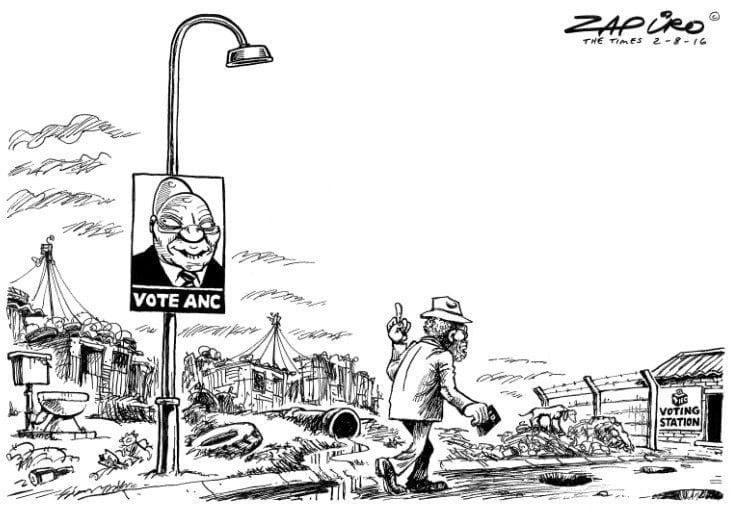 Always a politically active country, South Africa is not a particularly happy place right now and this has been a bitterly fought campaign. But with big cities like Johannesburg and Tshwane, and villages like Port Elizabeth (Nelson Mandela Bay) virtually neck and neck in the opinion polls, the previously all-powerful ANC looks set to incur significant losses.

Quite how they will take that remains to be seen.