I’m not into horticulture. (I used to think it was just for superior, disdainful people but that turned out to be haughtyculture – homonyms have never been my thing.)

However, last Autumn, I was given a bulb and I stuck it in the ground in our back garden. 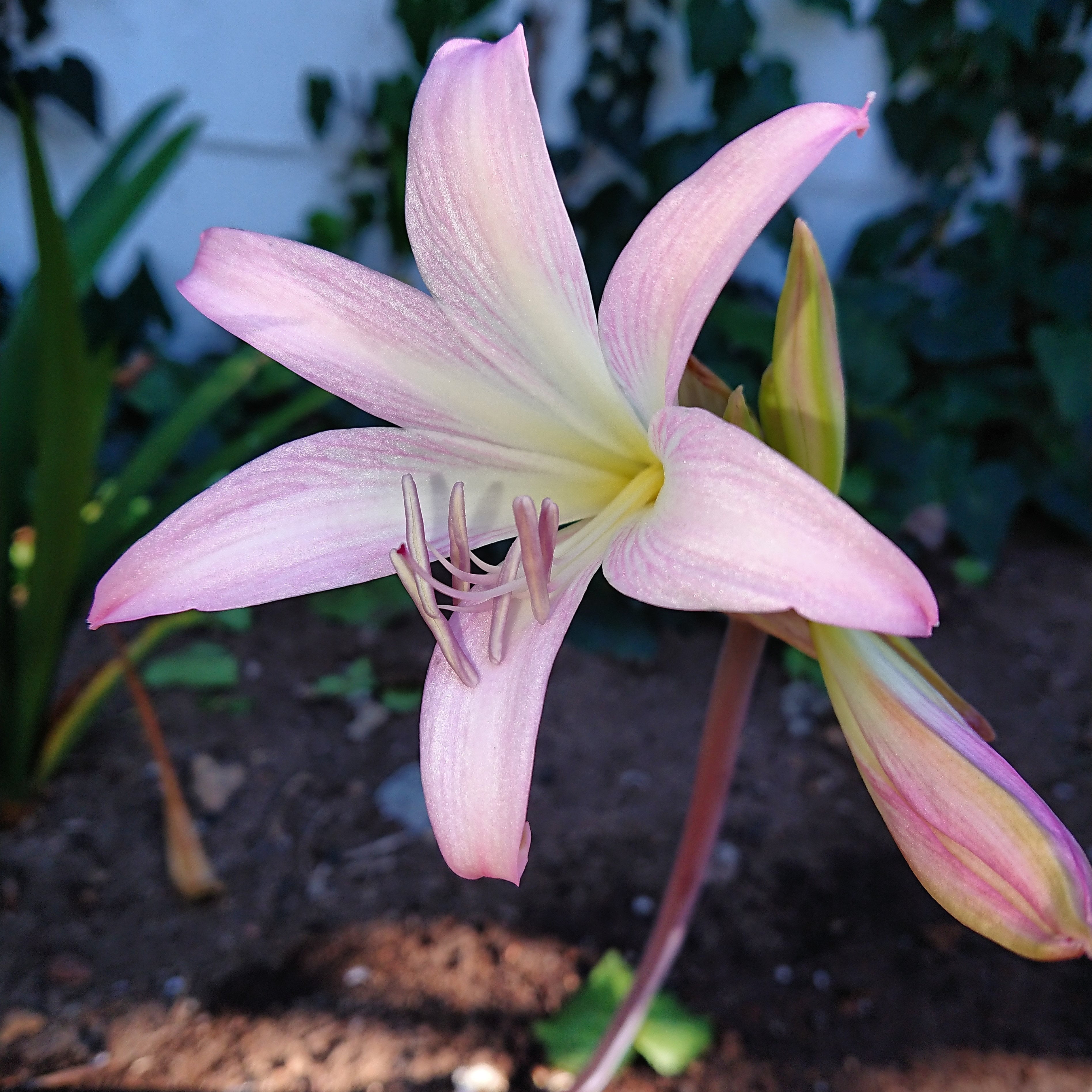 I can’t claim much credit for this pretty March Lily (Amaryllis belladonna). All that I’ve done is prevented the bulb being dug up by the beagle – Nature did the rest, and right on time as well.

So goes the oft-quoted, dangerously positive and hugely misplaced piece of advice. It’s nonsense, of course. Giving up is always an option – often a very sensible one. And yet we’re taught from an early age – and bombarded by  examples like Wiley Coyote and Tom the cat – that it’s tantamount to failure.

No. There are many times when giving up is a perfectly acceptable choice to make.

I wish Lily would understand that. They’ve been back in touch again (using yet another different email address to avoid my filters), this time offering me essentially free* shares in their company if I buy a Lily drone, under the tempting subject heading:

got Lily Drone yet? 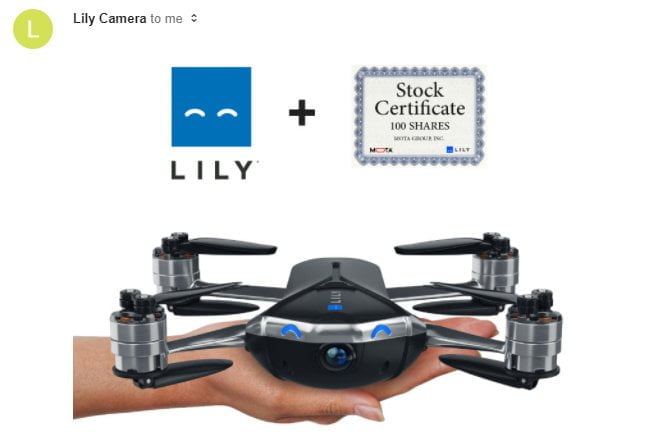 Looks cute, sure but it’s rather expensive and it’s not actually very good in comparison to the drone I do have.

You have been one of the original supporters of Lily. As part of your support, we believe you should own a piece of the company that is bringing the vision of Lily into the future. We have successfully launched the Lily Next-Gen™, and we’re planning many more exciting products. That’s why we are providing you with this unique offer.

I have been, yes. But then, over a year ago I realised my error and moved on. Just like you should now.

There’s no shame in giving up on this lost cause, Lily. I promise.

That last line by some distance the worst lyric in musical history (and there’s a lot of decent competition out there).

But this morning, an email from Lily. (Never mind the fact that I unsubscribed from their mailing list ages and ages ago.)

Lily are no more.

Antoine and Henry here from the Lily team. When Lily set out on the journey to create a flying camera over 3 years ago, we were determined to develop and deliver a product that would exceed your expectations.In the past year, the Lily family has had many ups and downs. We have been delighted by the steady advancements in the quality of our product and have received great feedback from our Beta program. At the same time, we have been racing against a clock of ever-diminishing funds. Over the past few months, we have tried to secure financing in order to unlock our manufacturing line and ship our first units – but have been unable to do this. As a result, we are deeply saddened to say that we are planning to wind down the company and offer refunds to customers (details below).We want to thank you for sticking with us and believing in us during this time. Our community was the drive that kept us going even as circumstances became more and more difficult. Your encouraging words through our forums and in your emails gave us hope and the energy we needed to keep fighting.Before we sign off, we want to thank all the people who have worked at Lily, who have partnered with us, and who have invested in us. Thank you for giving your all, nights, weekends and holidays, in the effort to deliver a great product.After so much hard work, we are sad to see this adventure come to an end. We are very sorry and disappointed that we will not be able to deliver your flying camera, and are incredibly grateful for your support as a pre-order customer. Thank you for believing in our vision and giving us the opportunity to get this far. We hope our contribution will help pave the way for the exciting future of our industry.Sincerely,Antoine and HenryLily Founders

Lily tried to make something that no-one had ever managed to make before: a drone which film your adventures while it followed you around, filming your escapades in luxurious HD, but more than that, a portable drone which you could pop in your pocket and take anywhere. (That description just for those of you that struggle with the definition of ‘portable’.)

It looked good. It looked like something I was after, and thus, following some degree of due diligence, I dived in. As did over 60,000 others, yielding more than $34,000,000 in revenue.

But despite a huge uptake, the process was fraught with problems. Reviews of the product test shots were less than complimentary, although the Lily guys always had a reason and a fix and buyers were kept well informed as to the latest developments via email. It was this excellent communication policy that kept me going, despite the delivery date being moved further and further out. Then – 18 months into a 10 month process – they decided that they couldn’t deliver to SA and the alarm bell, tired of being overused and ignored fell off the wall. I pulled the plug.

I’m not surprised that they are struggling to find funding. If they were at this stage 2 years ago, there would be no issue. But things have outpaced them: the good news was that while Lily were struggling with hardware, software, camera, funding and shipping issues, other companies were moving on in the background. DJI had (finally) seen the gap in the market and moved all their existing Phantom technology into a portable drone: the Mavic Pro. Notably more expensive than Lily, but also packed with more features such as 4K video, obstacle avoidance and actually existing, mine arrived last week. Even if Lily were still going, I’d not have their drone yet. And it’s nearly 2 years on from my order.

I’m sad. Lily were trying to do a good thing, it just didn’t work out. As with any start-up, the mountains they had to climb were huge. The issues with the technology are a bit beyond me, but perhaps their biggest error was repeatedly promising too much and repeatedly having to backtrack. Another player in the market would have been great, (especially as Parrot are also struggling) but perhaps it was their idea and the interest it generated that prompted the development of the Mavic Pro. So, for that, thank you Lily.

Hopefully, there are positives that the Lily team can take out of this experience: their communication strategy should be one of them. I’ll keep an eye on what they are going to do next, because I have (more) high hopes.

Not the infamous Normandy landings. My very own D-Day – it is [drum roll] Drone Delivery Day. Yes, finally, almost 2 years after the start of the whole Lily debacle, it all ends today. Hopefully, anyway.
The call came through on Wednesday afternoon that the shipment from the US of A had arrived in the R of SA and that my name was on the list to be one of the lucky recipients of the units therein. Delivery was promised yesterday or today (but probably today), and since nothing much happened yesterday, I’m imagining that today is D-Day – hence the title of this post.

Drone Delivery Day. So should that be DD-Day? Double D Day?
Or is that a bit too big (careful now).

[here are a long gap in writing]

Sorry – I got dragged away there. Strategy meeting – hours of it. Joy and indeed rapture. But there is light at the end that tunnel – and that light might come from the headlights of MY NEW DRONE WHICH HAS BEEN DELIVERED TO MY HOUSE WHILE I WAS IN THE MEETING!

Much like actually arriving in Bergen for the a-ha concert in May last year, I hardly dare believe that it’s happened, and yet the money has long since exited my bank account and the delivery has happened. They’d better not have messed it up. I’m sure they won’t have done, but somehow, a nagging doubt remains.

To be honest that’s probably the last you’ll hear of the whole drone thing. It seems likely that I won’t ever mention anything about it again.

As you were then.

I wrote a couple of months ago that I had abandoned my plans to get a Lily drone, after their estimated delivery time was pushed further and further out, and their videos and updates were greeted with dismay and disappointment by independent experts all over the internet. Then there was the issue of them not being able to deliver to SA because:

Still, on the plus side, they refunded my money quickly and without fuss, and the ZAR:USD exchange rate fucktuation [sic] meant that I didn’t lose out on the deal.
On the downside, it appears that I’m still on their mailing list. And over the weekend, that showed me just how lucky I was. Because the latest news is that US deliveries are only being shipped in late December and into January.

And then, this line:

Due to regulatory and logistical constraints, international pre-orders will start shipping later in 2017.

This is what they’re saying now, a good six months ahead of the date. This for a product that was meant to be in my hands in February 2016 – six months ago. And, six months ago, guess what? They were saying that people would have their Lily in six months time. Déja vu, much?

We’ve embarked on a journey to create a self-flying camera not just for hobbyists and professionals, but for any creative mind looking to capture the world from a new angle. This would not be possible without you.
Thank you again for your support. Your vote of confidence means everything to us.

Which is an unfortunate turn of phrase given that I’ve already abstained.

I’ll be interested to see if there are any further delays. I honestly can’t believe that suddenly, everything has changed.