The rules are very clear.

They state that on the first day of the new Premier League season, you have to share this song:

And if you are in the Western Cape (which I are), you are also obliged to remind readers that this fantastic and original video was filmed in Piketberg, just up the road from Cape Town.

I’d much rather that Sheffield United were up there (the Premier League, not Piketberg) competing with the best in the land (and also Nottingham Forest, Dirty L**ds and West Ham), but maybe next year when I share this song again, we’ll be there.

The English Premier League returns this weekend and international coverage promises to be better than ever before, with the fantastic John Dykes at the helm – and he’s already been tweeting teasers of the new studio.

Look at that touchscreen! LOOK AT IT! 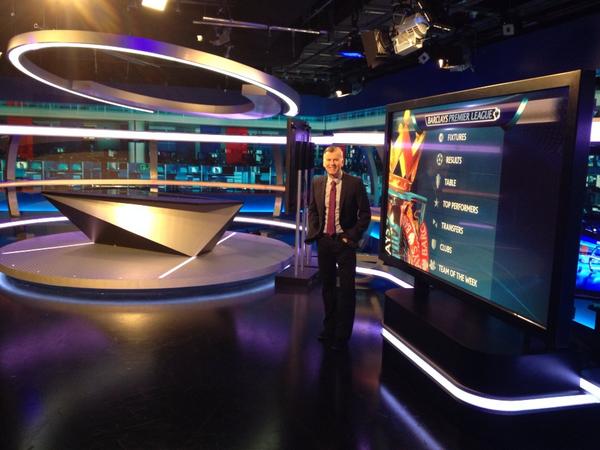 And the horrendous pink has gone! Lawd be praised!

They don’t use Kasabian’s Fire as the EPL theme music any more, but for the millions of SA fans, the two will always remain inextricably linked. Thus, it is presented here:

And yes, that’s beautiful Piketberg in the video.

You may remember this song from this video. It also features on the new SuperSport ads.

The chase scene with a seemingly undefeatable pursuer reminds me of Kasabian’s Re-wired.

And the rest of the album is rather good too, although this is the stand out track.

More on Sound of Guns here.

The “new” Kasabian album is brilliant, as I commented when it really was “new” last year. And the “new” video for the “new” single Re-wired  – featuring an odd double middle 8 section with violins – is also pretty good.

I particularly enjoyed the Wayne’s World moment in the Fiat 126 at about 2:10. But remember kids, smoking and stealing cars are both naughty things which you shouldn’t do.

You can get full details of Kasabian’s World Tour on their YouTube channel. Please note that it comprehensively avoids South Africa.
Thanks for that.

The 6000 miles… Best Album of the Year 2011 voting is in full swing. I say “voting” because that makes it sound vaguely democratic and democracy is good, mmmkay? In actual fact, I’m using the term “democratic” in the full Zimbabwean tradition – basically, what I say, goes, and if you wish to disagree, I’ll beat you with some sticks in the bush of Matabeleland.

And there are some strong contenders this year. The Streets’ Computers and Blues, Arctic Monkeys’ Suck It And See and now Kasabian’s Velociraptor!, from which this track Days Are Forgotten is taken:

I have gone on record () here [Thanks Joe] as saying that the first five songs on Velociraptor!:

are the best opening side (for those who can remember records and cassettes) to any album I can remember since October 1986: that month marked by the release of a-ha’s second album, Scoundrel Days, which had this line up on Side A:

See also, The Killers’ Day & Age, which came close, but which was let down  by the rather weak Joyride.

These tracks just work together. And they’re good. Sometimes with an album you want to skip a track or two, but not here. Musically, the combination of fast and slow, loud and soft (from tracks 3 to 4 on Scoundrel Days and the other way from 4 to 5 on Velociraptor!) is there in both cases. More on Kasabian’s Muse meets Beatles style when they pop out some more videos.

In the meantime, why not (carefully) stick down your thoughts on other contenders for this illustrious award in the comments below? Or maybe your thoughts on the best first five songs on any album. You may want to remember my Mugabesque approach to dissension, as described above.