Argh! Now they tell me!

Seems legit. But then some thoughts…

But perhaps most worryingly of all, I’m double-vaxxed and I typed this whole post just by thinking it.

Sadly, you know the type.
Spreading misinformation about vaccines, believing that the pandemic is a fraud:

[Sidenote: Really difficult for people to die in decreasing numbers.]

The type that generally tends to like a bit of hyperbole:

You know the ones.

And sure. You take those sort of tweets at face value and it could all seem a bit scary.

Balance things up by understanding that these tweets are from the same person that looks up into the sky, sees this:

…and thinks that the weather is being engineered by the same organisations that made up the pandemic.

And then – amazingly, but also obviously – connects the two…

6 viruses (lots of lab work to count them individually) and a case of Covid (which didn’t exist earlier, remember?) in 3 months all because of some beautiful pre-frontal skies. These people must get sick a lot.
Oh, and a seizure and a dash to the hospital (that bit clearly slipped their mind initially).

Weirdly, looking back, not a single mention of any of that on their Twitter feed at the time. A few photos of a night out, some talk of a motorcycle race, angry claims that the pandemic is a scam, the usual stuff.
But no seizure and rush to hospital thing. Odd. You’d think… ah, never mind.

In fact, glancing through this timeline, I think it’s best that if you know this person (who I am choosing not to identify right now), you get away quickly. It’s not just the sickness when there are clouds in the sky (oh, and the seizure). The number of people they know that have died from being vaccinated is through. the. roof.
It’s almost (almost) completely unbelievable.
I also know lots of people who have had the jab and they are absolutely fine, so I did some rudimentary calculations in order to try to tie this weird anomaly down to some common cause, and it seems that it’s ‘knowing this person’ which is the risk factor here (p <0.05).
So be warned.

Of course, people can think what they want and live their Walter Mitty fantasy lives if they so wish, although I’d rather that they didn’t share the details as if they were actually true. But what I am saying here is, when you see these horror stories of post-vaccination deaths and claims of fraudulent pandemics, just remember where they are coming from.

The person that is spreading this stuff also thinks that some cirrus clouds made their family sick for three months.

They – as has so often been mentioned – walk amongst us.

A few internet issues here this evening, so I’m just going to share this headline from pisspoor website (but good for this headline) thesouthafrican dot com. Don’t click on any links while you’re there. Thanks.

And yes, in January, she was properly ill.

Clearly, it’s affected her brain. In which case, presumably all of the participants at The Twat Parade on Saturday have had Covid at some point in the last twelve months…

Ooh dear. Professor Cookbook is still heading down the lunacy rabbithole. Sadly(?) he’s taking his 146,000 twitter followers with him. He responded to a horrifically fake video on [checks notes] @Katwoman6620’s…

Perhaps it’s all finally beginning to unravel. As Dr Judy Mikovits predicted it would nearly 2 years ago. Maybe the conspiracy is real (after all).

And then went on to suggest that the vaccine for SARS-CoV-2 wasn’t actually a vaccine at all. Thankfully, in stepped Professor Shabir Madhi – Prof of Vaccinology at Wits – with this gem:

Ouch. Is he even still breathing?

Of course, there’s a serious side to this as well. Tim’s cult hangs on his every word, and so they now likely also all think that the Covid-19 vaccine isn’t a vaccine. And while Tim has been been circling the edge of the anti-vax black hole for a while now, it does seem that he has finally been pulled in by the immense gravitational force acting upon his ridiculously large ego.

There’s free speech and there’s blatant, dangerous misinformation. It’s time for UCT to take away that honorary title that he so proudly displays right after his cookbook credentials, and to distance themselves from this total and utter moonbat. Prevent any further reputational damage to their institution via this direct association.

It would send out a strong message that abusing the power and privilege which they bestowed upon him – and others – will not be tolerated. And damn straight, too: this sort of BS costs lives.

I mean, after just years and years of training, experience and continuous education, that the entire scientific and medical community could have somehow slipped up and overlooked [vital information] about [important subject] is near inexcusable. 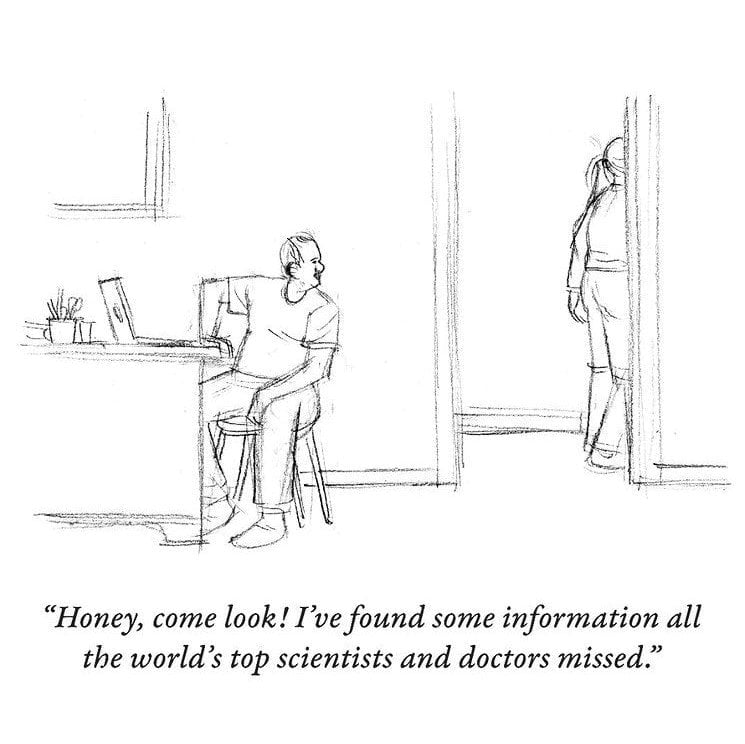 Thank goodness for people like this middle-aged man-Karen and his tireless research on social media sites, discovering the bits we didn’t and keeping us all honest.

(Not that I’m necessarily classing myself as one of “the world’s top scientists”.)
(But I can’t be far off, right?)