Let’s preface this with a couple of statements setting out my stall, shall we?

I’m not one of those people that believes that I shouldn’t have to pay tax. I recognise that tax is necessary in order for this country to function and for services to be delivered to me and everyone else.

That said, I’m well aware that this country would function much better, and that more services could be delivered to more people if a percentage of that tax money was not going straight into the back pockets of corrupt individuals across the various sectors of government in SA.

The problem is that the consequent shortfall in revenue is dealt with in three main ways: borrowing more money, cutting back services, and thinking up more and more ways to tax the population.

None of these are good things.

What should be happening is that corruption should be being eradicated. But that’s not happening and that’s why I was even more annoyed to hear that the next thing to be taxed is my Adobe subscription.

South Africa has imposed a tax on e-services, which includes software subscriptions.

So that’s an extra 15% on my Lightroom and Photoshop – a subscription that is already more expensive because it’s priced in USD, and the exchange rate has disintegrated to utter crap because of the way that this country is being run.

“Cancel your subscription then,” I hear you exclaim, conveniently ignoring the issues that I am trying to raise here. And hey, I could, but then I wouldn’t be able to work, and I would pay a whole lot less tax.
That wouldn’t be good for the overall fiscus, but it would be better for me.

Least of all me.

Never mind that taxing of “e-services” is a massive own goal, effectively limiting access to literally thousands of services for those least able to afford them.

Look, I can afford this, but of course, I’d rather not be paying it. It limits my income, and I will have to pass on these costs to my employers when I next bill them. And they’ll pass that on to their customers, so the ordinary guy in the street loses out in the end.

Remember earlier in the week when I was a little bewildered over the options that Adobe was giving me for my photo editing software?

I don’t recall there being two Lightrooms when I installed it just a few weeks ago. Suddenly there’s Lightroom CC and Lightroom Classic CC (which is the new name for Lightroom CC).

Thankfully, through a heady mix of good luck and vaguely informed guesswork, I think I managed to select the right version (for me, anyway). And I got free access to Adobe Photoshop too. Excellent.

And I was at peace.

Briefly, because this morning, I woke up to an email: 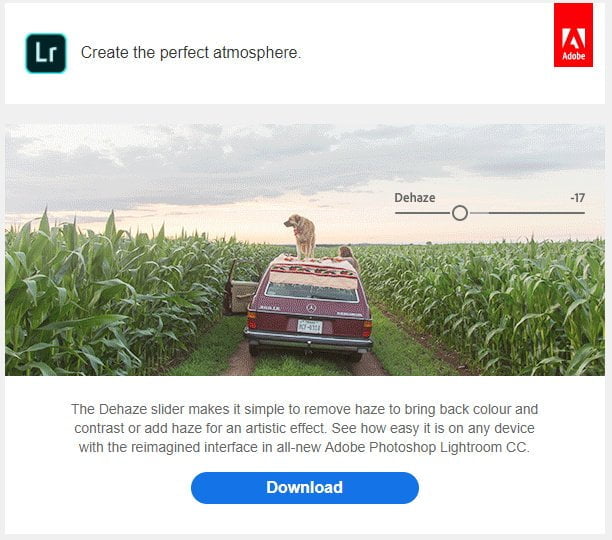 All-new “Adobe Photoshop Lightroom CC”? So, is this different to the other two? Or is it the same package as one (or both of them?) of the them, just under a different name? Worse still, the email was entitled “Adobe Capture CC”, which just adds further confusion to an already baffling stew. And how did that dog get up there? Presumably, he was lifted up there by the hippie hanging out of the passenger window, but why? The roof of a vintage Mercedes estate is no place for a canine. He wants to be sniffing around in the corn. Get him down. Now.

I have absolutely no idea which one, so I’m just going to switch on my laptop and see what happens.