With due respect to The 438 Game and that guy in Forries who called it.

Just over a week ago, President Cyril Ramaphosa addressed the nation regarding the Covid-19 situation here. I don’t need to go back over that speech because firstly, there wasn’t much to it, and secondly, I covered just how pathetic it was right here.

Suffice to say, the only two interventions he made in the face of a clearly incoming third wave of infections were to reduce the numbers permitted at gatherings to 250 outdoors and 100 indoors, and to extend the curfew by 1 hour: from midnight until 4am to 11pm until 4am. I commented at the time that these were unlikely to make any difference to the very worrying situation and were really just to make it look like the government were doing something. The gatherings numbers were still far too high to limit any potential spread and the extra hour would just hurt businesses that little bit more without making any difference to the number of infections.

And that’s if any of the regulations were being effectively observed, policed and enforced anyway. (They’re not.)

Unsurprisingly, the rate of new infections since the speech has increased across seven of the nine provinces. The only two outliers in this regard were the two smallest (by population) provinces: Northern Cape and Free State, which were – for the first time in their existences – both ahead of the curve for something. Sadly, it turned out to be the third wave.
The rest of the country, in which 95% of the population lives, showed dramatic increases across the board:

Not pretty, but not exactly much of a shock, either.

So, as before the speech (and as before the second wave), Ramaphosa has a decision to make: either a stricter lockdown or a more deadly third wave. I’ve said before that I won’t get into the argument of whether lockdowns are a good thing or not, and I’ve also said that I am very glad I’m not having to navigate a country through a pandemic.
But they’re getting paid the big bucks (and sharing the funds with their comrades) for this sort of thing, and they really should be doing much better.

Last week’s speech was never going to do anything but harm. And so it has proved.

SA politics is rarely dull. Some people might say that this is a good thing, and represents a young, vibrant democracy, constantly evaluating and questioning itself. And yes, that would be a good thing, but it does seem to be mainly widespread corruption and intra-party mud slinging which is taking the centre stage, while actually serving the country (which really, really needs serving), falls by the wayside.

The most recent infighting is within the governing party, the ANC, who are happily fiddling while Rome has no decent housing, a disastrous education system, zero unemployment prospects, an upcoming third wave of Covid-19 (now closer than ever) and plenty of crumbling infrastructure.
Still, while we’re concentrating on their petty squabbles, we’re not talking about all that other stuff, are we?

And I don’t use the term “petty squabbles” lightly, because while the consequences of their collective actions might be very serious indeed, it’s hard not to crack a faint grin at their playground posturing.

The latest episode (coming a whole day after the previous episode) concerns ANC Secretary General Elias “Ace” Magashule. He’s likely bent as a 12 Rand note, having been charged with fraud, corruption and money-laundering. Taking decisive (cough) action, (some of) the rest of the ANC leadership gave him 30 days to step aside from his post for the duration of his trial. That 30 days has just expired and Ace is still there. And so the President suspended him.

And Ace then suspended the President. “Lol”.

Cyril is having none of it. And rightly so, it seems, because while Ace says that Cyril has no right to suspend him, Cyril does have (the majority of) the NEC on his side. Ace has… well… himself. And constitutionally (that’s the ANC Constitution, not the National one), he doesn’t even have himself, because he’s been suspended.
Ace has as much power to suspend the President as my beagle has.

Lots of enthusiasm, lots of noise, zero understanding of how the actual political system works.

And so the ANC fragmentation merry-go-round continues, with some heavyweights and branches coming out in support of Magashule, more of them defending Ramaphosa, and local political commentators wasting no time at all in invoking Godwin’s Law.

All of this chaos must be like manna from heaven for the opposition, right?

Well, sure, if they were able to utilise it to strengthen their position. Sadly (I say sadly because a decent, strong opposition is hugely important to any country, and not because of any personal political affiliation), they are so incompetent that they’re actually going down in the polls despite the complete and utter fuckshow happening up top.
And why? Because of crap leadership and… gosh… political infighting within the party.

It all comes down to the cult of personality over actual ability to do the job they are elected and mandated to do. In a recent small scale study, an orange TV host was elected President of a powerful North American country, despite having no demonstrable political ability at all. The world watched on.

It did not end well.

I’m not saying that we’re quite at that level of disaster yet, but until we get leaders who are more concerned with leading the country than their own parties and personal position and wealth, we’re going nowhere except backwards.

Old news here now, but I felt that this one needed to be preserved for posterity. 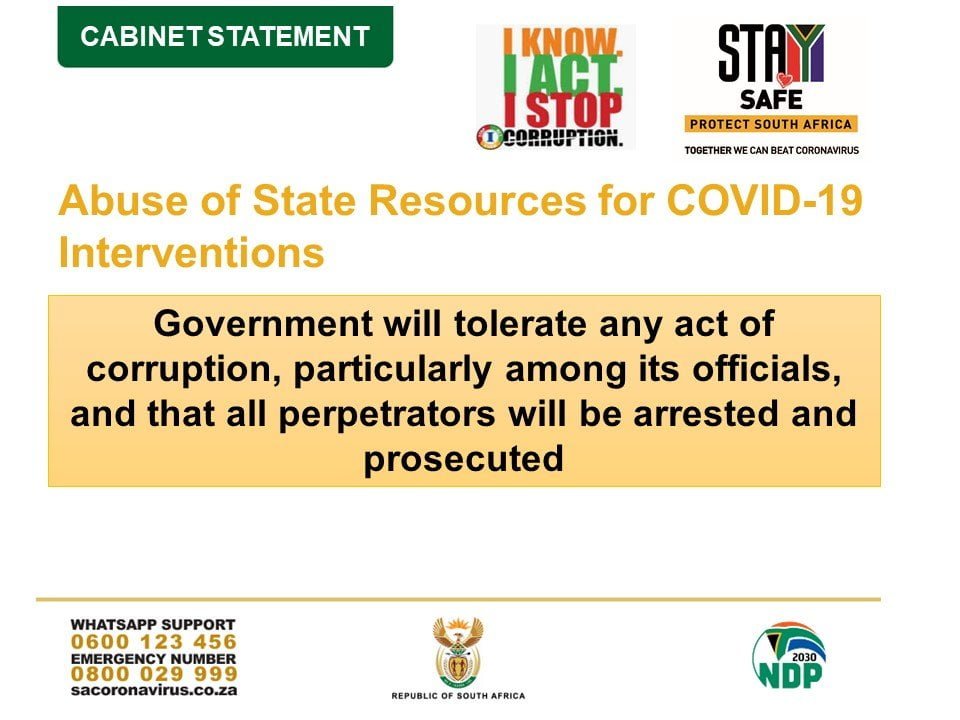 (Here it is with the original URL)

I mean, as Freudian slips go…

They (the government) have launched a task team/commission/ministerial committee to root out corruption and looting of Covid-19 relief funds. But then you look at who’s going to be doing the rooting out and you just sigh.
Let’s just say that they might not even have to leave their bedrooms if they have a mirror.

Still – love the image above. Some humour in dark times and with sick, sick people. 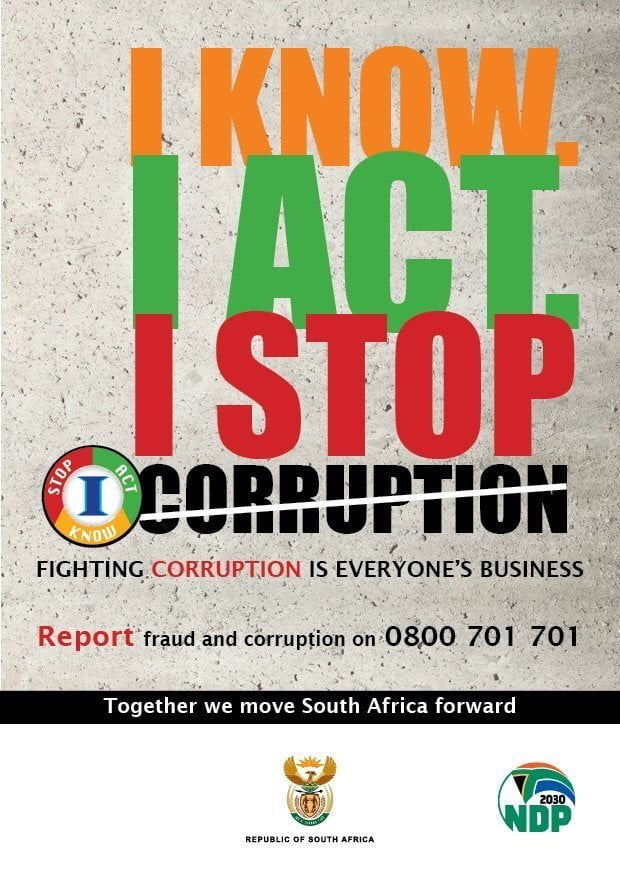 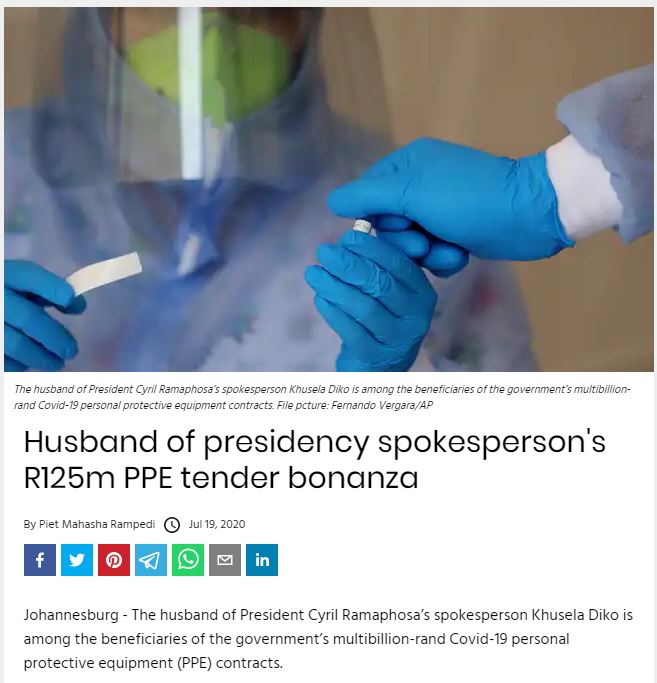 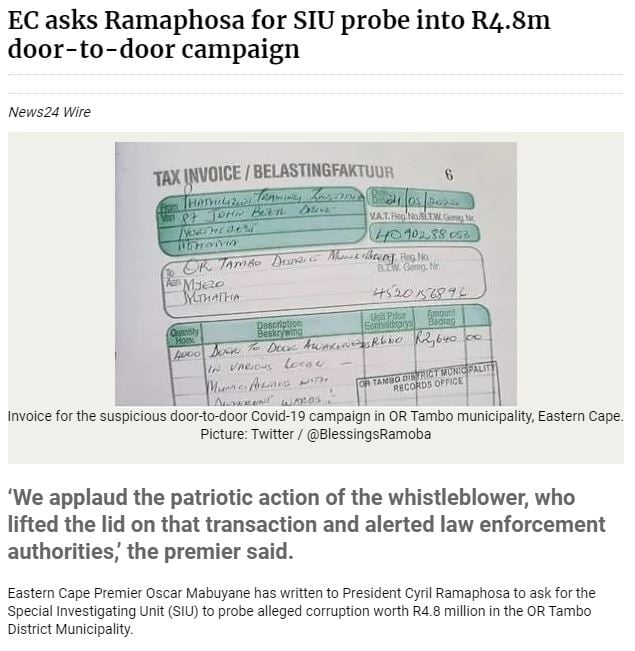 Let’s preface this with a couple of statements setting out my stall, shall we?

I’m not one of those people that believes that I shouldn’t have to pay tax. I recognise that tax is necessary in order for this country to function and for services to be delivered to me and everyone else.

That said, I’m well aware that this country would function much better, and that more services could be delivered to more people if a percentage of that tax money was not going straight into the back pockets of corrupt individuals across the various sectors of government in SA.

The problem is that the consequent shortfall in revenue is dealt with in three main ways: borrowing more money, cutting back services, and thinking up more and more ways to tax the population.

None of these are good things.

What should be happening is that corruption should be being eradicated. But that’s not happening and that’s why I was even more annoyed to hear that the next thing to be taxed is my Adobe subscription.

South Africa has imposed a tax on e-services, which includes software subscriptions.

So that’s an extra 15% on my Lightroom and Photoshop – a subscription that is already more expensive because it’s priced in USD, and the exchange rate has disintegrated to utter crap because of the way that this country is being run.

“Cancel your subscription then,” I hear you exclaim, conveniently ignoring the issues that I am trying to raise here. And hey, I could, but then I wouldn’t be able to work, and I would pay a whole lot less tax.
That wouldn’t be good for the overall fiscus, but it would be better for me.

Least of all me.

Never mind that taxing of “e-services” is a massive own goal, effectively limiting access to literally thousands of services for those least able to afford them.

Look, I can afford this, but of course, I’d rather not be paying it. It limits my income, and I will have to pass on these costs to my employers when I next bill them. And they’ll pass that on to their customers, so the ordinary guy in the street loses out in the end.