After a chilly night, and, as widely predicted (see earlier posts on this blog), Table Mountain has got a very light dusting of snow this morning.
Herewith the webcam image from 0645: 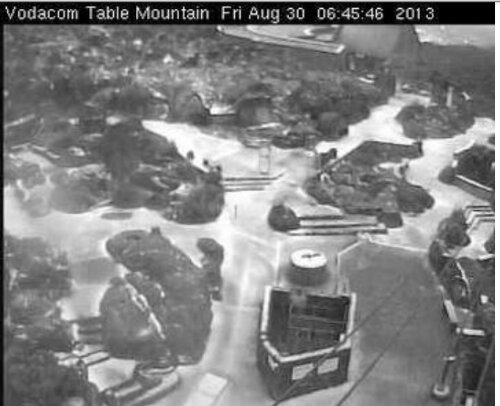 Although there is a chance of more snow today, things are already warming up, so this might be as much as we see this year. 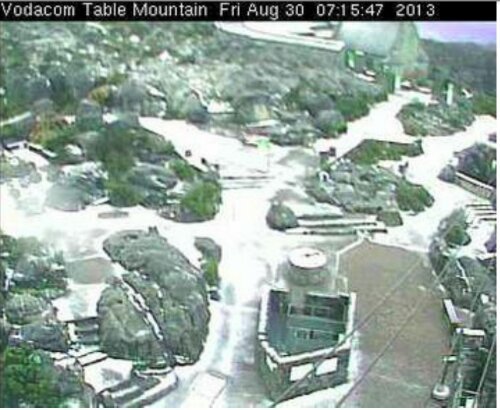 Here’s the link to their webcam.
And here’s the News24 gallery.

The line up for the Kirstenbosch Summer Sunset Concert series for 2012/13 has been released and it’s a case of the usual suspects and a few new faces. Here’s what we’re looking at this year:

Ticket prices are for 6-21 year olds and adults. BotSoc members are somewhere in between and (K) indicates there’s a Kids Zone at the concert in question.

You’ve gotta get through the international act Daniel Bedingfield who kicks things off (see what I did there?), before the highlights (for me) of Zebra & Giraffe, Arno Carstens and the much underrated Gangs of Ballet in March.

Mango Groove, Goldfish, Freshlyground and (once you’ve remortgaged your house) The Parlotones will obviously be popular, so book early.

Tickets for all concerts are available now from Webtickets.co.za and additional tickets will be available at Kirstenbosch (021 761 2866), from the Tuesday before each concert, when online tickets are sold out.

Yes, apparently this time the rumours might be true: The Red Hot Chili Peppers are set to tour South Africa (ie. visit Joburg and Cape Town) in 2013.

However, this new information (much like all the other information), which pushes the potential concerts back still further to 2013 comes (apparently, allegedly) straight from the horse’s mouth. And the particular equine in question is Attie van Wyk, founder of Big Concerts. This demonstrates the sheer desperation of the social media music scene in getting very excited about a band whose biggest hits wowed us just 21 years ago who may or may not play a concert which may or may not be happening in South Africa in the next 23½ months.

If the tour does happen, they will be supported (ever so ably, I’m sure) by The Parlotones. Tickets – to our great surprise and annoyance – will be available from Computicket, whose website – to our great surprise and annoyance – will crash on the morning that sales open.
The concerts will be well attended, the beer will run out after 20 minutes and the sound at the Cape Town Stadium will be a bit crap.